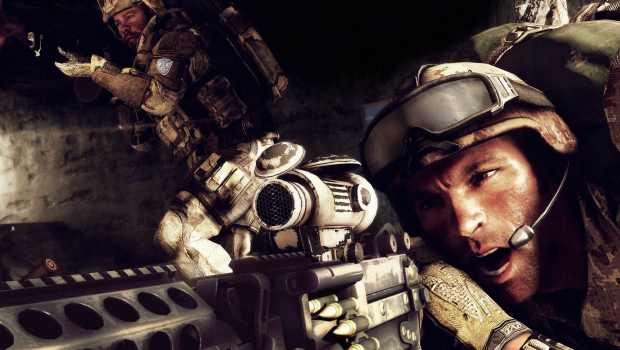 Game development finished via the Internet

Day one patches are nothing new, as developers increasingly exploit online connectivity to allow them to finish developing the game after they already pressed it onto a disc. Medal of Honor: Warfighter, however, seems to going for the gold.

Electronic Arts today posted a massive list of essential fixes that are coming in the patch, suggesting the game that shipped to stores wasn’t just missing a bit of polish, or even simply buggy — it was missing a load of obvious stuff. The patch is needed to make invite-only matches work, and add friends or join parties while in-game — that last fix being billed as a “new feature.”

This is a patch you won’t want to miss if you’re planning on picking the game up. Check out the full, exhaustive list of fixes below.

New Features:
•Now able to add friends and join parties while in-game.
•Can invite others to your platoon or apply to join a platoon while in-game.

General Tweaks and Fixes
Multiplayer Gameplay
•Removed initial delay to Spec Ops Signal Scan charging.
•Snipers in Recon stance will no longer be visible to enemy RQ7/RQ11 UAVs.
•Increased the accuracy of server-side aiming prediction.
•Fixed an issue with “Fall Back” spawning to improve its behavior.
•Fixed spawn type changing to Buddy Spawn automatically when it is not supposed to.
•Call in a Blackhawk for the losing team if they are getting dominated in Sector Control.

Weapons
•Fixed “no scope” shooting. Players were getting immediate ADS accuracy without having to wait for the scope to come all the way up. Was very exploitable for snipers.
•Sped up the bolt action on the CS5, since it was longer than the TAC300.
•Fixed issue with gap between where the LTLM can’t fire and where it indicates the target is too close.
•Reduced the damage/range of the Demolition’s SMGs (Scar PDW, HK 416c, Suchka), as they were overpowered.
•Made switching between primary and secondary weapons much more responsive.
•Fixed an issue where a grenade would not be thrown the next time if the user switches to their weapon while cooking a grenade.
•Player will now switch back to their secondary weapon if that is the weapon in use when throwing their last grenade.
•Fixed an issue where aiming was pushing the player away from the wall they were standing next to.
•Fixed clearance check for placing the Radar Jammer.
•Fixed auto-ADS not working when peek-and-leaning while prone.
•Implemented pre-streaming for weapons to reduce the time from spawn to ready-to-fire to be 0 seconds in most cases. Down from around 2 seconds prior to this fix.

UI and User Experience
Navigation
•Made the start button responsive as soon as the player enters the first menu screen.
•Simplified the way players navigate and select in the My Gun and Class Select menus.
•Fixed the way the UI handles scrolling, including speed and correct scroll bar position.
•Cleaned up a number of other small navigation quirks and issues.

User Experience
•Servers in the Server Browser are now sorted based on ping, giving priority to servers closest to the player.
•Filtering servers by name now works properly.
•Fixed an issue where changes in My Gun and My Soldier were not being retained when joining a game via the Quick Match or Matchmaking options in the MP Lobby.
•Optimized the login flow into Multiplayer.
•Updated the MP Lobby to include a shortcut to creating a Party.
•Quick Match button in the MP Lobby is now contextual, and will change to Platoon Matchmaking if you are in a Platoon Party.
•Fixed the Server Browser filter to properly sort for games that have 6+ open slots.
•Fixed a 20 second hang during the Online Pass flow.
•We now keep the queuing message open as long as the player is still queuing.
•Clean up notification numbers when a new item is viewed.
•Various other flow and user experience optimizations.

Visual Polish
•We now turn off the HUD when we start to show the outro scoreboard.
•Fixed display of text in disabled dropdowns.
•Fixed some subtitle lines being cut off.
•Removed hints and tips from the loading screens that were no longer valid.
•Fixed the Player Banners to display the correct rank icon and number.
•Fixed placement of auto-save icon on CRT TVs.
•Fixed HUD elements not showing in certain cases.
•Fixed animations in the post-match screens as they show the player’s progression.
•Fixed the timer not displaying in the post-match screens.
•Fixed player name tags not showing up in-game in Home Run.
•Icons are now scaled on the sniper’s mini-map when they are using the bipod.
•Updated the art used in the Player Banner.
•Fixed some camera issues on level entry.
•Fixed the demolitions class mask display in certain situations.
•Fixed an issue that would cause some images not to display properly.
•Various other alignment, corruption, overlap and visual improvements and fixes.

Additional Fixes Made on PC and PS3
Multiplayer Gameplay
•Improved the camera for the Apache.
•Improved the aiming of the rockets in the Apache.
•Improved Blackhawk functionality in Novi Grad Warzone.
•Fixed a bug in the rules for pre-round in Combat Mission.
•Fixed a couple of out of bounds issues in Sarajevo Stadium.
•Fixed an out of bounds issue in Basilan Aftermath.
•Fixed a bad spawn point in Team Deathmatch in Somalia Stronghold.
•(PS3 – Japan) Fixed an issue that prevented 17-year old users from playing online.

Visual Polish
•Fixed an issue where support action icons were overlapping each other.
•Kill messages should now better match timing within gameplay.
•Improved readability of kill messages.
•Fixed visual effects issue in Tungawan Jungle.
•Fixed mini-map issue in Shogore Valley.
•Improved visual fidelity of some of the flag images.
•Smoothed transitions between screens in the Mulitplayer menus.
•Fixed a visual glitch when adjusting the brightness in the Options menu.
•Fixed a bug where the News in the MP Lobby was not showing up.

Misc Fixes
•Removed Quit Game from the Top Navigation Bar in the in-game pause menu and placed it under “Last Resort” in the Respawn Menu.
•Fixed a case of an explosion not playing the correct audio.
•Various audio mix updates.
•(PS3 – Japan) Various stability fixes.
•Fixed functionality and list updates for Favorite and Recent servers.
•Players with chat restrictions are no longer allowed to create their own platoon.
•Platoon names and tags are now restricted to no more than 3 numerals each.
•(PS3 – Japan) Fixed two issues related to platoon names and chat-restricted accounts.
•Fixed an issue with invites specific to PS3 and PC where the player would get stuck on a black screen.
•Various stability and performance improvements.
•(PS3 – Japan) Fixed an issue related to save file size calculation.

Additional Fixes Made on Xbox 360
•Improved the handling of memory cards and saved profiles.
•Improved handling of parties and Fireteam designations in Platoon matches.
•Fixed an issue related to progression loss if the user removes the storage device.
•Fixed an issue where a player’s class was changing without their input.
•Fixed an issue where, under certain circumstances, brand new players were forced to play with a placeholder weapon in multiplayer until
their first death.
•Stability improvements.

Additional Fixes Made on PC
•Fixed an issue where controller prompts were showing even though a controller was not plugged in.
•Mouse wheel now works with all scrolling lists in the game.