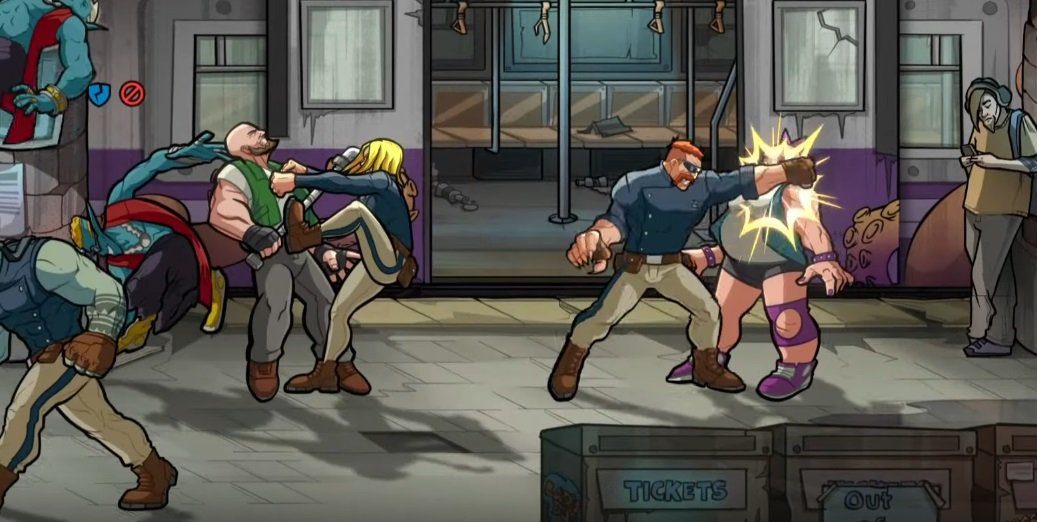 Hitting the market (and faces) this summer

You might remember, back in the fall of 2020, we sent word of a sexy-looking street scrapper, Mayhem Brawler, in the works at indie outfit Hero Concept. Well, the comic-book style brawler has a release date, and will bring its titular mayhem to PS4, Xbox One, PC, iiRCADE, and Nintendo Switch August 18.

Set in a self-styled “urban fantasy”, Mayhem Brawler sees a city that has spiraled wildly out-of-control, with its avenues and alleyways dominated by a super megacorp and its army of mutated minions. While the thugs roaming the streets are trouble enough, things get really out of hand once you throw werewolves, wizards, vampires, and other fantasy creatures into the mix. Fucking wizards, I tell ya.

Into this burned-out berg stride three agents of the Stronghold enforcement division, for whom a routine investigation is about to become a real bad day. While they may be hopelessly outnumbered, our protagonists Star, Dolphin, and Trouble are loaded for bear with amazing martial-arts abilities and super-powered special moves, redressing the balance somewhat against the horde of bad dudes that stand in their way… Including the wizards. Again, Do Not Forget the Wizards.

For an independent production, Hero Concepts is going all-out in its efforts to deliver a fully-rounded experience. Mayhem Brawler will feature three-player couch co-op, a fully-voiced story mode, (complete with branching character paths and multiple endings), hand-drawn artwork, a rogues’ gallery of over 30 enemies and 12 boss characters.

Hero Concepts will be showcasing Mayhem Brawler as part of June’s Steam Next Fest and Xbox Summer Games Fest events, so we won’t have to wait too much longer before we can all get a taste of the great-looking title for ourselves. Undeniably inspired by the excellent Streets of Rage 4, here’s hoping that Mayhem Brawler delivers the same compelling, satisfying, and cathartic action.

By the way, rockabilly werewolf waitress is easily, easily my favorite character of 2021.