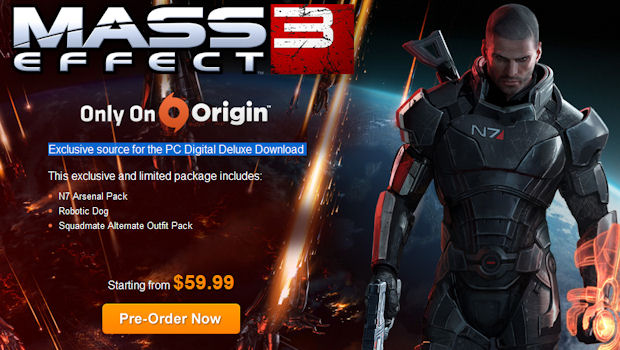 In what many be able to call a predictable move, Electronic Arts has announced its proprietary digital service Origin as the only place to download the enhanced version of Mass Effect 3. As boasted by the service itself, it will be the “Exclusive source for the PC Digital Deluxe Download .”

So far it seems that only the Deluxe Edition will be exclusive, as perhaps not even EA is stupid enough to restrict the game entirely to its silly little Internet Shoppe.

Those ordering from Origin will receive three in-game items — the N7 Arsenal Pack, the Robotic Dog and the Squadmate Alternate Outfit Pack. The digital deluxe version costs $79.99, which frankly sounds like way too much for a download that just has three extra pieces of content in it.

Isn’t it great how Electronic Arts is trying to ignite the giddy fun of the console wars on the PC market without bringing anything competitive to the table? Oh wait, that’s not really great at all.