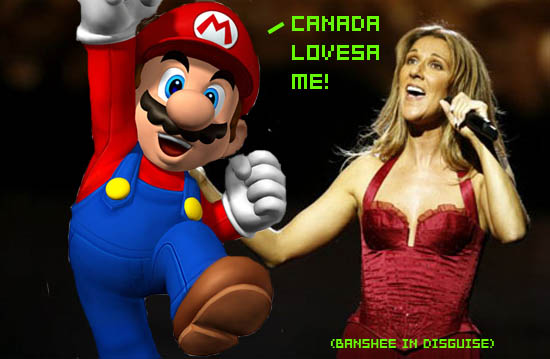 Wow, talk about an insult to the Canadian government. According to a recent survey commissioned by Nintendo of Canada, more people recognize Mario than Stephen Harper, the Canadian Prime Minister. Even more interesting is that more women across Canada recognized Mario in the survey.  (Does this mean more Canadian female gamers … or more women recognizing the guy they see their husband playing on the TV?)

Nintendo of Canada was of course pleased as punch, stating the following:

“Canadian politicians are lucky Mario doesn’t have his Canadian citizenship and could campaign for office,” said Ron Bertram, general manager of Nintendo of Canada. “It’s no surprise that Mario is more recognized than high-profile politicians: he’s entertained generations of Canadians and inspires only happy thoughts.”

Do I sense a bit of snark there, Mr. Bertram? Eh, I guess it’s deserved after a survey like that. I hardly recognize half of the American Senate myself. As my imagination wanders, I’m envisioning some sort of Battle Royale between Mario and Celine Dion where he cheerfully murders her in a blur of color and happy music. I’d buy that game, I tell you that.

[Via Newswire – Thanks Ryan!]