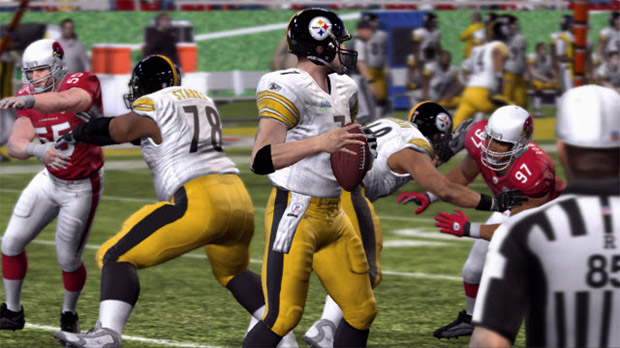 EA has been giving gamers a behind-the-scenes look at the development process for Madden NFL 10 on its Inside EA Sports blog for a while now, but today, they’ve blown the lid with a major announcement: the release date. The 21st consecutive annual edition of the venerated football series will hit stores on Friday, August 14, 2009, just under four weeks before the 2009 NFL season kicks off.

According to the press release (after the break), Madden NFL 10 is in development for the PS3, 360, Wii, PS2, and PSP. (Curiously, there’s no mention of a PC version, even though EA announced last July that there would be one this year; we contacted EA for their official comment, which you can also find below the fold.) The press release specifically discusses the Wii version (no “All-Play” moniker this year, apparently), saying it will have a “unique, genre-defining art style” — my guess is, it’s going to look like Grand Slam Tennis.

Along with the news of the release date, EA Sports has launched the game’s official Web site at maddennfl.easports.com (which currently seems to be down it’s back up). There, you’ll find all the latest information on Madden 10 (I still think they should’ve gone with 2010, by the way), including links to all the developer blog updates and a countdown to the 2009 NFL Draft on Friday, April 24, during which the cover athlete is always revealed. EA’s doing some pretty neat community stuff with the site — it will act as a hub for hardcore football fans to follow the draft progress and debate the in-game ratings of each draft pick.

The Madden 10 site is also doing something unprecedented in regards to the coverboy: in the weeks leading up to the unveiling itself, EA will add to a list of candidates for the cover. The two players currently in contention are Minnesota Vikings RB Adrian Peterson and Baltimore Ravens FS Ed Reed; two new athletes will be added every Monday.

Who do you want to see on the cover of Madden NFL 10?

Regarding a PC version of Madden NFL 10, EA Tiburon (the developer) had this to say:

We continue to explore ideas to revitalize the PC for sports games and the types of games that are best suited to the platform, and this remains our goal for the Madden NFL franchise.

What could that mean? You tell us. And now, we return you to your regularly scheduled programming press release.

REDWOOD CITY, Calif., – March 31, 2009 – Paint on the eye black and lace up the cleats, Electronic Arts Inc. (NASDAQ: ERTS) announced today that Madden NFL 10 will be available in North American retail stores on Friday, August 14. The storied football franchise ushers in a new era with advancements that bring the NFL fan everything they see on Sundays, minus the grass stains.

On-field authenticity and emotion is taken to another level in Madden NFL 10. With more control over the outcome of the play than ever before, players can drag defenders towards the first down marker, fight for a fumble at the bottom of the pile, and avoid the rush by stepping up into the pocket. Utilizing an all-new animation technology, Madden NFL 10 ensures that the Fight For Every Yard doesn’t end until the whistle blows.

“The Tiburon team couldn’t be more excited about Madden NFL 10.” said Phil Frazier, Senior Producer. “With online innovation that will connect Madden fans together like never before, an immersive broadcast presentation that captures the suspense and emotion of the NFL, and the most authentic gameplay to date, Madden NFL 10 will be the pinnacle in the award-winning franchise.”

Madden NFL 10 on the Wii™ introduces a unique, genre-defining art style that will raise the bar for sports games on the console. Completely redesigned and built from the ground up, Madden NFL 10 epitomizes what fun looks like on the Wii and will deliver a social, dynamic experience for the entire living room.

Madden NFL 10 will kick off the season with the Madden NFL 10 Draft Experience hosted exclusively at maddennfl.easports.com on Saturday, April 25th. The innovative website will feature a live, streaming draft analysis show produced right from Madden headquarters in Orlando, Florida. The show will feature several interactive elements, including live call-ins from NFL athletes, on-site correspondents from New York City, and the chance for Madden fans to phone in with comments and questions. As players are drafted, their official Madden NFL 10 ratings will be released and discussed live. The website will also feature dynamic polls, social networking feeds, photos from the NFL Draft, and live blogs from the Madden NFL 10 player ratings team. The Madden NFL Draft Experience is a fully interactive destination for NFL and Madden fans alike.