Last summer, we reported on the strange-but-true news that Clockwork Aquario, an unreleased arcade platformer from the 1990s, would finally see release, some 30 years after the title’s cancellation. And it seems that the party’s about to start, as ININ Games has announced a launch window of Q2 2021 on PS4 and Nintendo Switch.

Clockwork Aquario was initially designed by Wonder Boy developer Westone Bit Entertainment, with the very ambitious platforming project scheduled to launch in 1992. Ironically, by the time said year rolled around, it was decided that the vibrant visuals and gameplay were outdated for the now fighter-heavy arcade scene, and Clockwork Aquario was shelved indefinitely, a sliver away from completion.

This is where Strictly Limited Games comes in. Having learned about Clockwork Aquario‘s existence, the boutique publisher teamed with ININ Games in order to discover the code’s whereabouts – a pilgrimage that took a further three years. Eventually, a deal was struck with license-holder Sega M2, and work finally began on putting the finishing touches on the project.

While some of the game’s original elements were now lost to time, including music and sound effects, the project runners were able to convince members of the M.I.A. title’s original development team – including programmer Takanori Kurihara, composer Shinichi Sakamoto, and Wonder Boy creator Ryuichi Nishizawa, to return and complete the project. Thanks to everyone’s spirit and passion, Clockwork Aquario will now finally join the pantheon of retro platform games, finding the space in the market that eluded it almost three decades earlier. 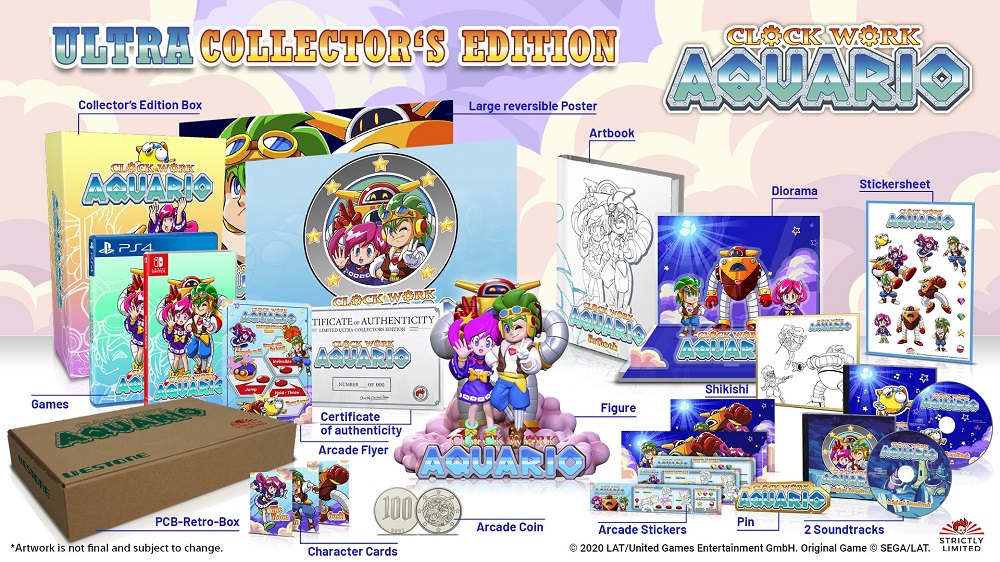 To celebrate the impending launch of Clockwork Aquario, Strictly Limited Games has released details of several physical releases, currently available to pre-order at the publisher’s online store. A standard physical edition includes a hard copy of the game on PS4 or Nintendo Switch, (though the latter platform has unfortunately already sold out).

An $80 Collector’s Edition includes a copy of the game alongside characters cards, a double-disc soundtrack, an acrylic diorama, sticker sheet, hardcover artbook, arcade flyer reprint, and a replica ¥100 coin. Finally, a $150 Ultra Collector’s Edition includes all of the above plus a PCB-style cardboard box, a certificate of authenticity, a reversible poster, pin badge, and a seven-inch figurine of protagonists Elle, Huck, and Gush. You can check out all of the above editions on the Strictly Limited store.