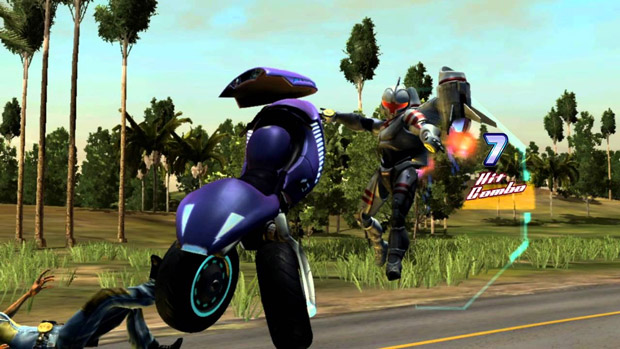 For a while now, I’ve had the urge to play a Spy Hunter-like game. (But not, oddly enough, an honest-to-goodness, actual Spy Hunter — trust me, I’ve tried.) I’m starting to look toward Twisted Pixel for a helping hand.

LocoCycle is yet another unusual project from the makers of ‘Splosion Man and Comic Jumper. At this point, it’s becoming easier to pin down what makes a Twisted Pixel production, despite the studio’s willingness to experiment with genres. Common themes and all that jazz. You probably know if you’re into these dudes’ work or not by now.

This Xbox One launch title (which will also be out on Xbox 360) isn’t going to wow anyone, visually, but I got a kick out of its arcade-y, high-speed driving and shooting, and performing mid-air combos by hammering away on a gamepad was enjoyable. Twenty bucks? Eh. I might bite, if for no other reason than to see the new Beard intro.