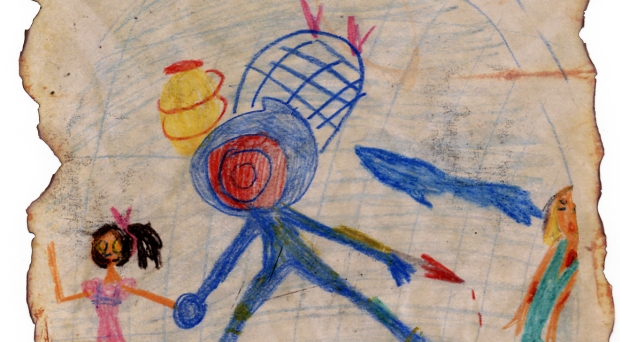 I got a little package this past weekend from someone named Mark Meltzer. There were a couple of pictures, a URL address and a letter which had this to say:

“I assume Jeremiah Lynch gave you my contact information to help me with my research. Enclosed are two of the items I found in the lunchbox that SHE left. Please let me know if you can make anything of them. Any information you might have could be integral to find my daughter.”

The letter ends with his signature, which looks like it was signed while he was in the middle of a seizure. The URL on the piece of paper, which was obviously written by someone long before the Internet existed, points to Something In the Sea, the viral site for BioShock 2.

A lot has been added since the viral site first launched. Lots of new clues have been found in an attempt to find out who or what has been kidnapping little girls. Have any of you found anything interesting on the viral site?

Also, Little Sisters are horrible at drawing things. What the hell is up with the Big Sister image? Why is she wearing a bea hive and fish nets with clothes pins on her head? The Big Sister isn’t blue either. The Splicer looks like it just sneezed water. Why does the Big Sister have an arrow on her hand? Damn kids just need to stick to sucking out Adam from corpses.

P.S. Criticizing drawings made by children feels so empowering.