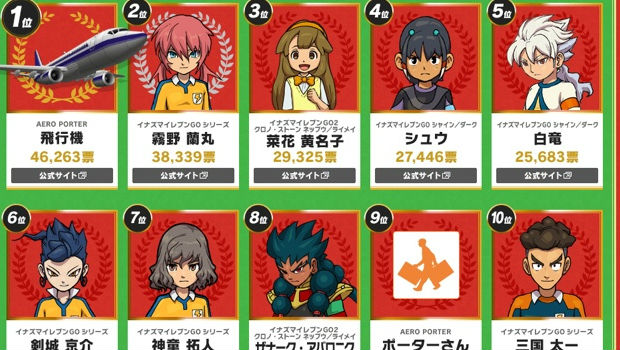 To celebrate their 15th anniversary, Level-5 held a fan poll to find out what the current favorite was amongst their colorful stable of characters. As many people know, Professor Layton is a popular Level-5 franchise, alongside of quite a few other classics.

So imagine my surprise when the airplane from Aero Porter won by 46,000 votes. Wait, what?! Although characters from the famous Inazuma Eleven made it in (which makes sense in Japan), it appears as if an inanimate airplane beat out to a ton of other classics, including Layton, who didn’t even break the top 10 with the 13th spot.

Level-5 head Akihiro Hino apparently spotted a discrepancy a few weeks back and asked for people to stop exploiting it, but it’s possible that people chose to take that as a sign to ignore it even further. If trickery really is at play here, it’s a bit of a disappointment as I would have loved to see a real Level-5 poll — they really have a great collection of creations.