Feel the steam all around me

Code Name S.T.E.A.M. is a new turn-based, third-person strategy game from Intelligent Systems, maker of the critically acclaimed Fire Emblem and Advance Wars series. It launches in North America for Nintendo 3DS on March 13, in Japan on May 14, and in Europe on May 15.

The basic premise of the game is that you are part of a crack-squad unit assigned to protect the earth from alien invaders. And all of this takes place in the 1800s (although no solid time frame was given in the demo), in London, and your boss is none other than Abraham Lincoln.

Oh, one more thing: Everything runs on steam. Sold yet? 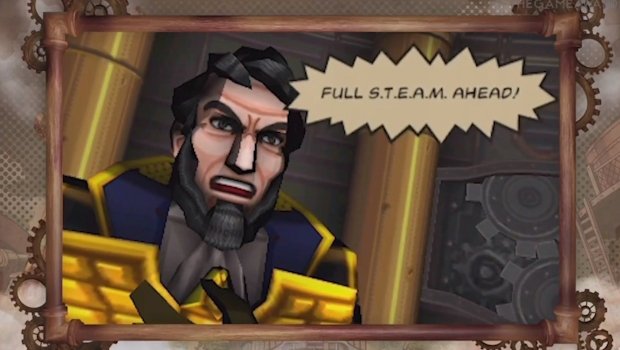 Code Name S.T.E.A.M. looks and sounds fantastic. I know it’s been said before but screenshots of 3DS games on the Internet or in magazines do them absolutely no justice. Intelligent Systems has gone for a nice, cartoony look here. Every character is outlined in thick black brush lines, which makes them really pop in their surroundings. The game itself is made to resemble a comic book; this is apparent during cut-scenes, where the action and story unfold with the use of storyboard-type panels.

The character animations are also super smooth. Everything runs great, without a hitch or lag. I have no idea what the exact frame rate is, but it’s just like butter — smooth.

Not only does Code Name S.T.E.A.M. look good, but it sounds amazing as well. Everything from the music during each mission to the sound of your weapons has a nice, realistic feel to it. There are certain parts, such as the loading screen, where it seems as if you’re listening to old music straight from a vintage phonograph. The sound design really helps to immerse you into this strange yet familiar world.

The gameplay is split into two types: real-time strategy and third-person shooter; however, it’s never one or the other as both types of gameplay are used at all times. You play from an overhead, over-the-shoulder view. The controls definitely remind me of Kid Icarus: Uprising. You move your character with the left thumb pad, while all the camera movements are handled by the stylus. I imagine that the camera will be controlled by the new nub controller once the New 3DS launches. As is, it feels right, if you know what I mean. It works. It’s as fluid as you would expect from a company with Intelligent Systems’ pedigree.

Each map is filled with various corridors and pathways, all leading to the final goal, which happens to be a giant, glowing green door that reads, “goal.” You have to tactically move your unit through the maps, taking out alien invaders along the way. As you traverse the maps, you can destroy various objects to gain health as well as refill your steam canisters. You’re also able to save your game as you make your way through each map; however, you have to reach specific save points first, making your every move mean that much more.

Your movements are 100 percent dependent on how much steam your have left in your tanks. Every few steps and every shot of your weapon takes away some steam. It’s easy to make the mistake of moving too far, only to be left facing an enemy without enough steam to fire off a shot. You have to carefully plan your course of action, hiding behind obstacles along the way. Of course, you’re never really out of danger as some of the objects you’ll find yourself hiding behind can easily be destroyed by the enemy.

Oh, and have I mentioned that you get to play as John Henry, who launches grenades called “bear grenades” that completely obliterate anything in their vicinity? Well, you can, and it’s amazing.

When the demo was over, I was left wanting more. Intelligent Systems has nailed the fusion of an RTS with the action and excitement of a third-person shooter. The controls are silky smooth, and the animation and character designs are spectacular. Playing as some of the most well-known figures in American history is just the icing on top of this steam-filled cake.

I’ve had my pre-order in for Code Name S.T.E.A.M. for a while now, so I’ll definitely be picking this up when it launches; the hard part now is the wait, especially since I’ve been given a small taste of what’s to come.