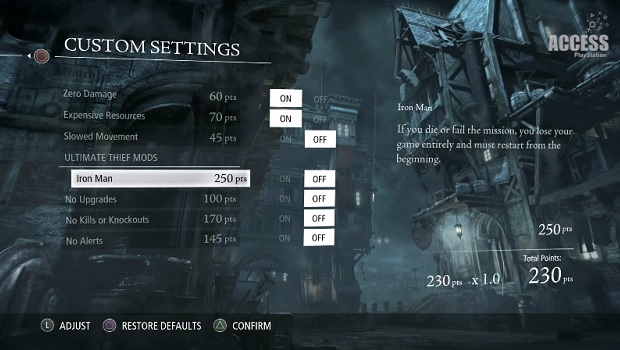 We already knew that the upcoming reboot of Thief was going to have lots of customization on PC, but it’s good to see the PlayStation 4 (and presumably all console versions) will have those options too. From the start of the game you can select all the modifiers you want along with a core difficulty setting. What I didn’t realize was that the more modifiers you have active, the better points modifier you’ll get, so hopefully there’s some leaderboards that will show off your stealth skills.

It’s still amazing that a game can ship in 2014 and have an option called The Iron Man, a modifier that restarts the game if you die or fail a mission. Permadeath in a Thief game? That is going to be quite a challenge. There’s plenty of UI customizations in Thief too, but I feel that’s going to be possibly a case of trial and error with those; remove too many and the game might just be a little bit too hard.