Let’s face it: massively multiplayer online games can be intimidating for some people. Between the incredibly nuanced systems that some titles tout, and the tales of time and dedication required to “properly” play a game, it’s not exactly an inviting scene. It’s tough to fault those that shy away from the genre altogether.

Funcom’s out to make an accessible free-to-play MMO, and it’s got the world’s most beloved toy brand behind it. LEGO Minifigures Online is a game that’s technically aimed at children, but it’s plenty reasonable to expect a more mature audience will find a certain cathartic thrill, too.

Yes, accessibility’s the crux of LEGO Minifigures Online, and that permeates both the gameplay and the places you’ll find it. Available on both PC and Android/iOS devices, it features crossplay capabilities so that anyone can pick up wherever they left off at any time.

While it’s easy to find a device to pick up and jump into LEGO Minifigures Online, it’s just as simple to actually play. Most of the gameplay is assigned to left-clicking or tapping the screen. This includes walking, attacking, and building. A few odds and ends are assigned to other buttons, but there’s nothing overwhelming to be found here.

Don’t think for a second that its simplicity is a hindrance, though. No, this game boasts some seriously entertaining gameplay for those who are willing to give it a try. Sectioned off into different worlds, players go on raids in parties of up to four people. The area that we were shown was pirate-themed, but the developers made mention of a medieval setting as well as a few others. 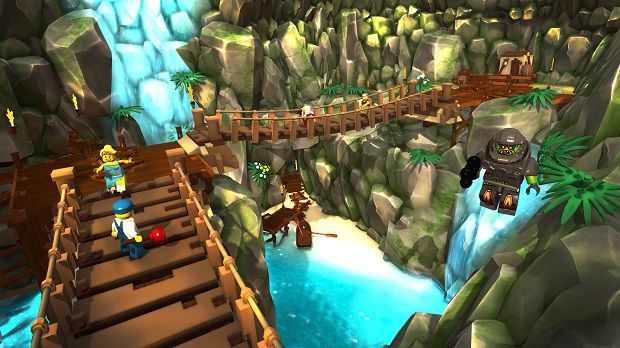 The titular characters — that is, the Minifigures — are put on center stage, as they’re the real focal point here. LEGO Minifigures Online promises to feature a cast of around 100 at game’s launch. If the selection we were shown is any indication, they’ll be incredibly varied. A few that we saw were an ice skater, a sky diver, a paintballer, a motorcyclist, and a fairy.

Their appearances weren’t their only defining characteristics, though. Each character has two attacks that are uniquely their own. Some are direct, others are area-of-effect, and usually they work well in conjunction with one another. Apart from this, each character can be leveled up to level ten through a shared pool of experience points. In theory, if you want to dash one right up to the level cap, you can, but at the expense of the progress of others. 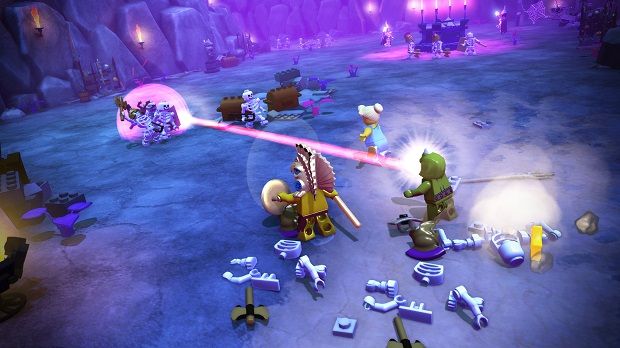 Most of the fun in LEGO Minifigures Online comes from simply unlocking new characters. There are a host of ways to do this in-game, such as beating bosses, earning achievements, and finding them in the wild. However, Funcom plans to also insert downloadable codes in packs of Minifigures at retail, meaning that each new toy bought comes with a tangible and digital version.

As for the questing, the raid we were taken on wasn’t overly difficult, but could prove a bit challenging at times. It focused a lot on areas full of new enemies with the occasional objective. Surprisingly, building wasn’t as central of a theme as expected. It was more about combat and collecting. By the end, we were fighting a kraken — a multi-tiered boss that was actually somewhat thought-provoking.

At first impression, LEGO Minifigures Online is a title that most anyone can have fun with. I don’t know if those expecting a true MMO experience will be able to look to this as a long-term fix, but going into it with an action-game mindset may help. Actually, in a lot of ways it might remind you of Traveller’s Tale LEGO games, and there’s nothing wrong with that.