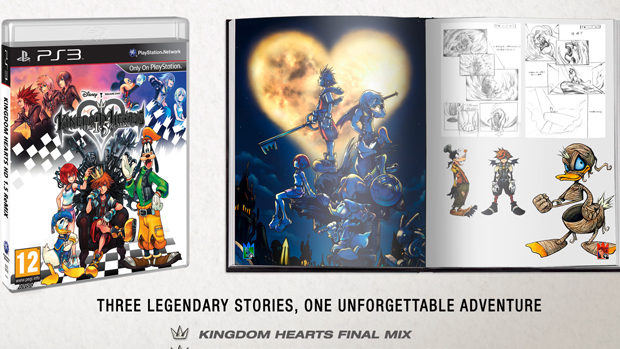 Publisher Square Enix revealed today that Kingdom Hearts HD 1.5 ReMIX will arrive on PlayStation 3 on September 10, filling the need for Kingdom Hearts and awesomely bad game titles in one swoop. Pre-orders will be treated to a limited edition 24-page hardcover art book. The book will cover concept and promotional art from all series entries.

Kingdom Hearts HD contains a high-definition version of the previously exclusive to Japan Kingdom Hearts Final Mix and remastered version of Re:Chain of Memories, a PS2 remake of a handheld sequel. In addition to touched-up visuals, the games include revisions to gameplay, trophy support, and story videos from Kingdom Hearts 358/2 Days.

Even though I lose a good amount of brain cells every time I write about Kingdom Hearts‘s convoluted titles and story, I’ve been looking forward to jumping back into the original. Maybe this time I’ll be able to make sense of it all without resorting to 50+ page story FAQs. If not, I still have a colorful, fun RPG of the kind that we rarely see anymore.

Now, if only Square Enix would release the game in summer instead of fall. You know, the time when we don’t have next gen consoles and major franchise sequels.