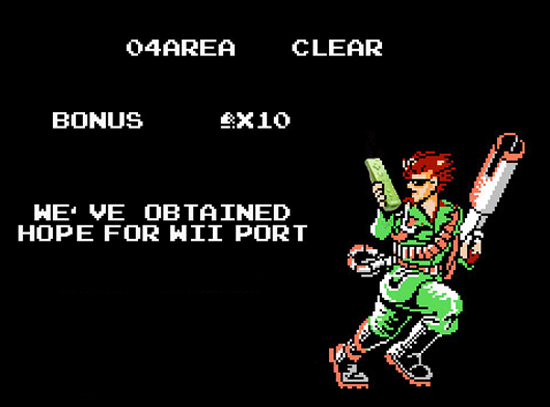 The thoughts, ideas, and opinions in the following blog are that of Jonathan Holmes and do not necessarily represent those of www.destructoid.com.

It has been an insane three months for Bionic Commando fans. First Capcom announced something no one saw coming, a new Bionic Commando game for the Xbox 360 and PS3. Then the game’s producer said they might make a Wii version, and a petiton to show Capcom that Wii owners want the game got over 8000 e-signatures in less than a week. And yesterday Capcom showed us the first glimpse of a new, honest to god, 2D/3D remake of the classic NES Bionic Commando that may in fact be everything we BC fans have been pining for over the last 20 years.

I am so friggin’ pumped for both of these games, but sadly neither has been announced on the Wii. This may be a deal breaker for me. No Wii, then maybe no new Bionic Commando for this guy. I can understand why you may think me insane or just plain stupid for saying this, but you have to understand that Bionic Commando is not an ordinary franchise to me. I don’t just like Bionic Commando, I love it. I love it so, so much.

Hit the jump for more ramblings and a pic of an awsome Bionic Commando toy. Also, contest.

Bionic Commando is like my long lost Junior High girlfriend I met while on summer vacation in Canada. We met at the “Picky Pickins Picnic Day Carnival”. It’s some weird Canadian tradition thing. I don’t know, I wasn’t really paying attention when my Dad explained it. All I really remember of that summer is her. She had long red hair, which that night seemed to glow pink as she nibbled at her cotton candy. The shine from her braces called out to me like a light house beacon calling a lost ship home. No doubt about it, this feeling was love. It was love at first sight.

When I got back from vacation a few weeks later and told everyone about her, no one believed she was real. “What would a hot girl like that want with a freckle faced No-Friend-Oh like you?” they all said. They had a point. She was too good to be true. I lost confidence and stopped returning her calls, fearful that if she got to know the “real” me she’d break my heart.

In time my memories of her began to fade, but the feelings never died. When ever I see a re-run of the Wonder Years featuring little Winnie Cooper, or if ever I walk by a diner and smell back bacon, all those feelings for her come rushing back to the front of my mind, travel down my face, and exit my mouth in the form of a bittersweet sigh.

Now twenty years later she’s found me on the internet. From the pics she emailed to me, she’s even prettier than she was back in Junior High. Even if she wasn’t, I’d still be excited to hear from her. And your not going to believe this, but she’s actually coming to the States for a business trip later this year. She says she’s even going to go out of her way on one of the days she’s down here to drive out to and see me for dinner. Maybe we’ll even make out or something. I’m so excited! I can’t believe this is really happening.

This reunion is too big of a deal to leave anything up to chance. That means the candles on the dinner table must be strategically angled so that the light hits her face in the most flattering manner possible. The chicken must be cooked with the exact amount of tenderness, neither too juicy (implies I’m careless and overzealous love maker) nor too dry (implies yucky chicken taste). The music that plays when she enters the room must be that slow jam we used to dry hump to in the back of her Daddy’s car, and it has to be cued so that the bass comes in just as she takes her seat at the table. Everything about this reunion must be perfect to live up to my rose colored memories of this girl from years gone by. Otherwise, I’m not sure I even want to see her. It might be too heart breaking.

It’s this same sort of thinking that makes it so important to me that Bionic Commando (the 2D/3D remake of the original or the all new game) be delivered via Wii-Remote. Everything has got to be perfect for this one to live up to my long time love of the original NES Bionic Commando. I could go into why perfect = Wii port, but why bother? You don’t really care what I think, do you? You just want to win that contest I mentioned. So here we go!

To enter all you need to do is submit proof of your undying love for Bionic Commando. This can be in form of a long winded narrative metaphor like the one above, a song, video, photoshop, photograph, drawing, poetry, found footage, fake screen shot, fake street sign, fake movie poster, Bionic Commando sequel/spin off idea, rant of outrage over how much you hate the upcoming Bionic Commando games (even though you haven’t even played them yet), what ever you think will best convey your feelings of love for Bionic Commando. A perfect example for an entry would be this custom Bionic Commando action figure our own BlindsideDork found on Ebay. 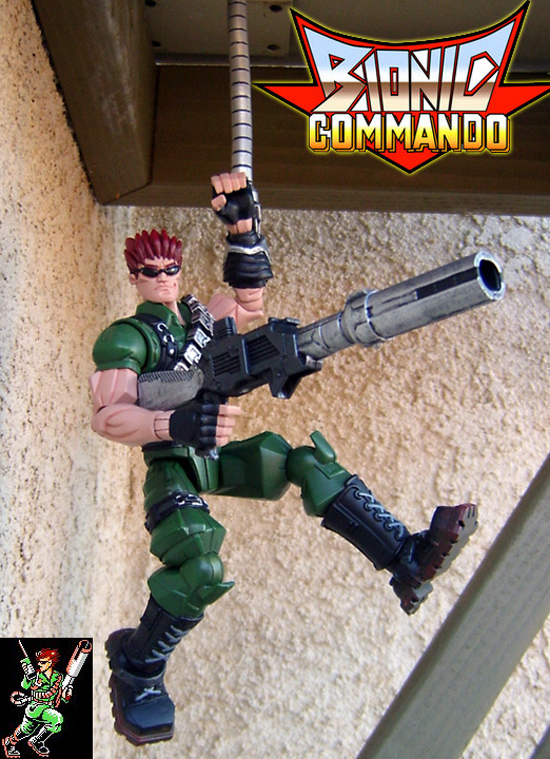 This entry would be a contender not so much for it’s craftsmanship, but for copious amounts of love that went into making it. You don’t have to be a master toy maker to win this sucker. Again, it’s all about the love.

Post a link or other means for acquisition of your entry here in the comments. You can enter as many times as you want, so don’t feel bad if your first video of Hitler’s head exploding wasn’t as good as you wanted it to be. You can always make another. Winners will be judged by the Destructoid staff. The contest ends once a decision on a Wii port of either upcoming Bionic Commando games is made, or once either game is released, which ever comes first. So enter as soon as you can, you never know when that next announcement will drop.

Oh yeah, and for your submission(s) to count you also have to sign the petition for a Wii port. Sign with your D-toid screen name so I know it’s you. Doing so will officially “activate” your entry. If all you do is sign this petition with you D-toid screen name and make note of it with a comment in this post, that counts as an act of love for Bionic Commando, and is therefore considered an official entry into this contest.  If you really love Bionic Commando, you’d sign a petition for the game to be on the WonderSwan Color. When you truly love a game, you want for it to be free to roam to all consoles so the whole world of gamers can enjoy it.

Oh, and no “2 girls, 1 Bionic Commando” entries please. If it would get deleted as a comment or a C-blog due to pornographic or other “inappropriate” content, it can’t be an entry. But you probably knew that, right?

First prize winners (1) will get the Capcom Wii game of their choice, Capcom Classics Mini Mix for the GameBoy Advance (which includes a port of the NES Bionic Commando), and a hand drawn picture by me of Mr Destructoid and my Canadian ex-girlfriend in a Bionic Commando themed situation.

Second Prize Winners (3) will get Capcom Classics Mini Mix and a picture.

Third Prize winners (6) just get a picture. Hey, maybe it will be worth something some day.