While reading through Darren’s personal picks for game of the year, I realized something troubling: I haven’t played Tomodachi Life in, oh my god, months. Literal months.

And it’s not like the signs weren’t there. I had, as I’ve since discovered, nine system notifications prompting me to check in on my people, each and every one of them unread. Monstrous. How could I have so blatantly ignored the fine citizens of Bomination Island?

I was hesitant to tap the 3DS’ lower screen — to begin the healing process — but I needed to see how my Miis had gotten along without my guidance. Immediately, a news flash appeared. 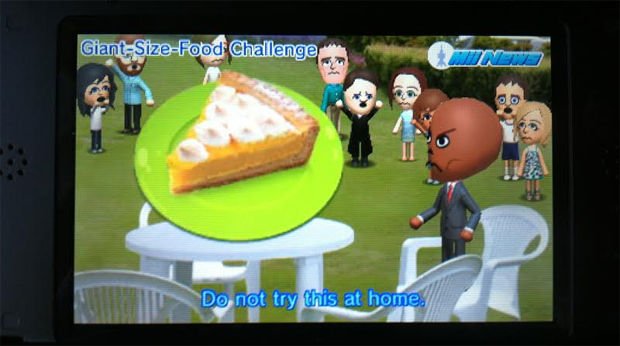 He bravely shrugged off the concerns of the audience, but gave up with only one bite left to eat. Hubris, Red Skull. Hubris! I should’ve been there for him when no one else was.

“I feel like I’ve seen this before,” Charles Xavier said in response to the failed pie-eating feat.

Oh, Charles. Sweet, shiny Charles. I have missed you so. You and your good friends Hal Cranston and Bob Ross and yes, even Emma Lastname. Each and every one of you.

To think, all this commotion was contained in a single Mii News report. There are countless others — including a “foot-warming reunion,” whatever the hell that is — I need to catch up on. Bomination’s poor quality of life rating won’t fix itself but I’m committed. These wounds will heal.

I’ll start by getting everyone something real nice for Christmas.