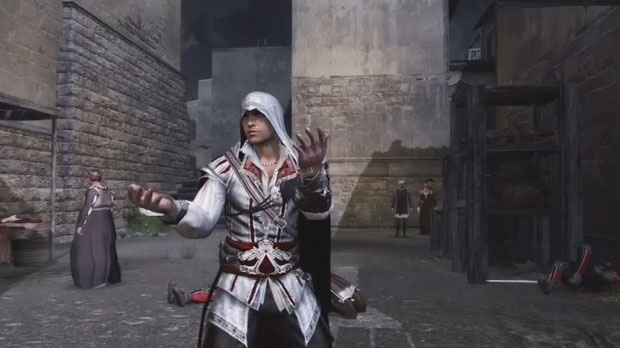 If you woke up this morning wondering what a bunch of mixed martial arts fighters thought about Assassin’s Creed 2, today is your lucky day. Ubisoft has put a promo spot together where professional MMA fighters make tenuous links to the upcoming title, and it’s actually quite entertaining.

“”When I’m inside the cage by myself, there’s nobody else I can rely on,” says Brandon Vera, “It’s kind of like the assassin. He’s on his own. Basically, you’re like the lone wolf.”

Sure, I’ll buy that. Things the assassin also has in common with MMA fighters, according to the video: honor, he knees people in the nuts, he punches people in the face, and you don’t want to piss them off. See? Totally the same thing.

Also released today is a trailer for Assassin’s Creed: Bloodlines, the PlayStation Portable title that puts players back in the shoes of Altair from the first title. Both trailers are after the jump, and if you like seeing people jump off buildings so they can stab dudes, they’re definitely for you.