Russia’s reach grows and war could break out with the United States at any second. Russian military bases are being established all over South America and growing ever closer to US borders. There’s also the threat of Russian forces from the West.

Both countries are on the verge of battle when the infamous B-Company stumbles upon a secret super weapon being developed by the Russians. Now it’s up to Bad Company to destroy this weapon before it’s used against the United States.

Hit the break to get more details on Battlefield: Bad Company 2’s story, and how the game is shaping up. 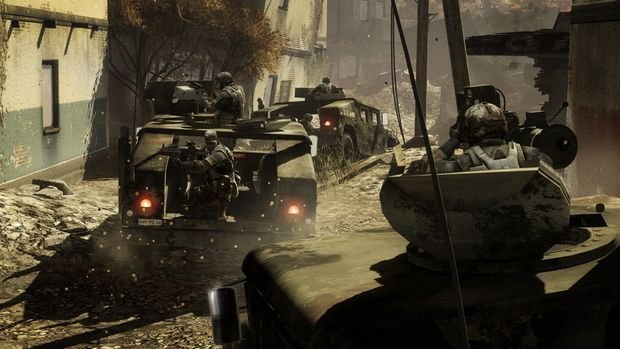 Bad Company is dropped close to a small South American village rife with hostile forces. You’re once again in control of Preston Marlowe, while your three allies from the first game — Terrence Sweetwater, George Haggard and Sergeant Samuel Redford — give you constant support. Before proceeding into the village, there’s a nearby weapon cache that you can use to swap out weapons. These caches are located across every level and contain all the guns with various customizations you’ve found throughout the game.

After equipping a couple of different weapons, B-Company makes its way to the edge of the village and lights things up against enemy forces. After taking out so many guys (and some buildings, too) we come across Aguire, who’s being used as a human shield by a Russian soldier. After the player shoots the Russian, Bad Company and Aguire update each other about the situation.

A Russian colonel named Kirilenko attacked Aguire to find out how he knew about Russia’s plans. Turns out Aguire was using a hacked French weather satellite to get the info. The Russians now know about the satellite, and Aguire tells Bad Company that they need to bring down the satellite to recover its black box in order to learn more about the super weapon.

The next level takes Bad Company to a Russian station near the satellite’s control point. The level begins with outfit attacking the base from a helicopter, where the player will use a mini-gun to shred anyone in their way. Once clear, the team rappels into the snowy base. 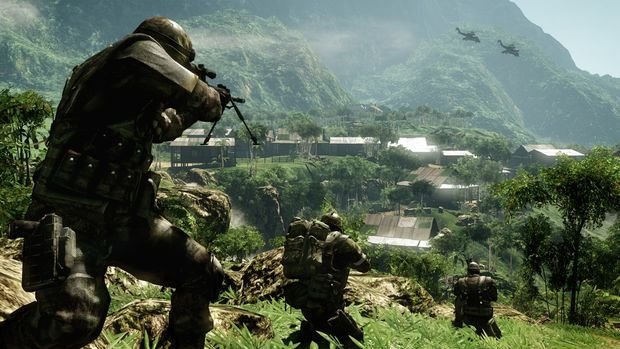 The team eventually finds its way to the control room for the satellite, where Sweetwater realigns it so it will crash nearby. The group then gets into a jeep; they’ll have to race towards the area where the satellite will fall, while taking on enemy vehicles. The player has to drive and can use a mounted grenade launcher as well to attack anything that comes at them. At the end of the chase sequence, a cut scene takes place where Bad Company sees the satellite smash into a nearby valley, ending the demo.

Everything is bigger and badder in Bad Company 2, with the scale of the levels huge and extremely detailed. Unfortunately, the invisible barrier from the original Bad Company makes its return in the sequel, which limits player movement throughout the world.

In keeping with the times, Bad Company 2 ditches the health system from the previous game. BC 2 has the now-standard regenerative health system: you’ll have to hide and wait to heal up if you’ve taken too much fire. The new system is better, but it was hard to tell when you were close to death.

The sound design for all of the weapons is extremely impressive. It’s extremely realistic and shooting enemies feels quite satisfying. It’s that feeling you get with shooting a sniper rifle in every other game out there, except you feel that for all the guns in BC 2. Oddly, the main character feels weighted down as you’re playing. It took longer than one would expect it to when moving the camera/gun around. This is in total contrast to the multiplayer, where that issue never arises.

One final thing to mention is the game’s AI for both the good and bad guys. They weren’t all that smart. The good guys barely left a dent in the enemy forces and it was easy killing bad guys, as they wouldn’t use cover most of the time. The quirky humor is at least still around and will make you laugh here and there.

Overall, Bad Company 2 is shaping out to have a good single-player experience. It’s going to be about ten hours long and takes place over nine or so levels. The real meat is going to be in the multiplayer. Look for a little preview on Squad Rush mode later today.