[Editor’s note: A New Challenger wraps up Community Blog Promotion week. Stay tuned for a special message from yours truely. Until then, Turok was an amazing game. Well, amazing until GoldenEye came out that is. Also, you haven’t lived until you’ve seen a Velociraptor get jiggy with it. — CTZ]

Hello world! When Hamza announced he was doling out some front page lovin’ to regular features from the Community Blogs, I said “How high?” because I’m terrible with figures of speech. I had just written a nice little entry about one of my favorite games as part of this ongoing series and I was excited that it would be getting more exposure. Just the thought of the “Popular Story From Our Community Blogs” banner adorning my article, resplendent in magnificence upon the front page where the huddled masses would bask in its glory, filled my cold and empty existence with a brilliant, shining glee.

Nay, nay, corrected Hamza in a timely electronic missive, a simple repackaging of previously published materials was not his intent at all. I was to compose an entirely new article in this series, one that would have its premiere to the public at large not in the squalid hovel I call my Community Blog, but, untainted, on the hallowed Destructoid home page itself.

“Make it epic“, he was sure to add. You can imagine my reaction at such news.

“Great, more work. For free, at that. Just fabulous.”
–What I pretend, for comedic effect, I wanted to say

“Oh, mighty robot gods, I am your humble supplicant, and I am eternally grateful for this magnanimous opportunity bestowed upon one unworthy as I. I shall commence posthaste!”
–What I said (more or less)

As it turned out, I had a topic in mind that fit the criterion of epicness.

To make an incredibly long story short, instead of learning about an awesome secret from Link’s Awakening, you get to read about an Acclaim game. L-l-lucky! 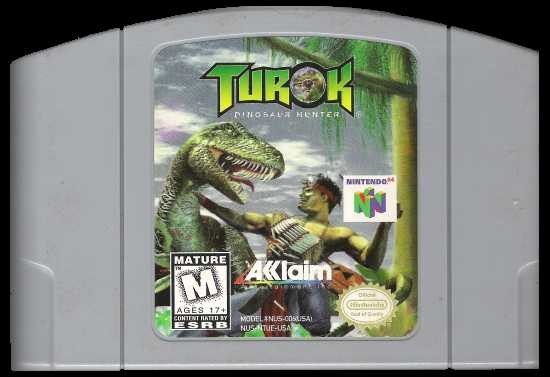 Fortunately for you, that game is Turok: Dinosaur Hunter, one of the few original Acclaim games that falls into the “Hey, this doesn’t suck at all; in fact, I think I’m enjoying it!” category.

For anyone who hasn’t played Turok or isn’t somehow familiar with the game, it was one of the first first-person shooters for the Nintendo 64. It had a similar weapon load to and played a lot like Doom, except with dinosaurs in the jungle instead of demons in hell. Also, the main character was a bare-chested Native American, which didn’t have much effect on anything in the game except one of the weapons was a bow with exploding arrows.

Among the traits it shared with id Software’s genre-defining game (not including the Super Nintendo version, which, most will agree, you shouldn’t. Ever.) was a bevy of cheat codes, as hinted at by the “Enter Cheat” option on the main menu. These could actually be learned in the game itself by defeating the final boss and watching the credits roll. At the end, the game would reveal one of the many cheat codes at random. One of the codes buried in this fine game is the focus of this article.

One of the most awesome cheat codes ever, simply known as “The Big Cheat.” Seriously, that’s what the game calls it. As you’ll see, it’s a terribly fitting name.

How do you get it? 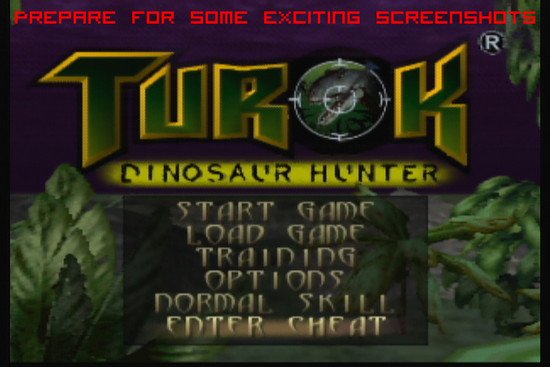 Select the “Enter Cheat” option from the main menu (or the pause menu, if you swing that way) and input the following code: 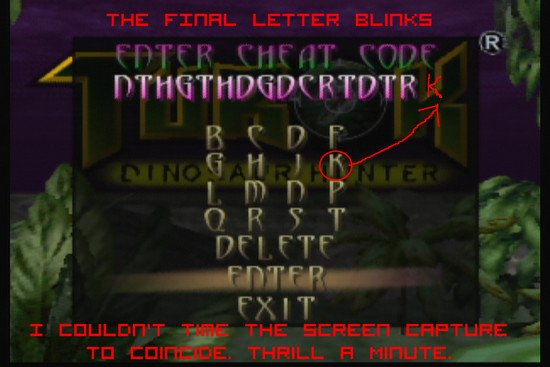 Something of a mouthful, eh? That is to say, it would be, if it were pronounceable. There’s reason #1 it’s called The Big Cheat. 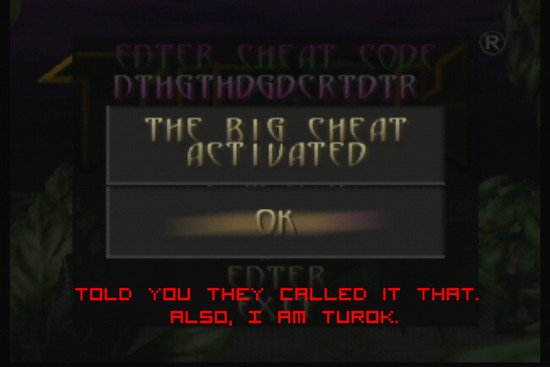 You’ll get a confirmation message if you entered the code correctly. 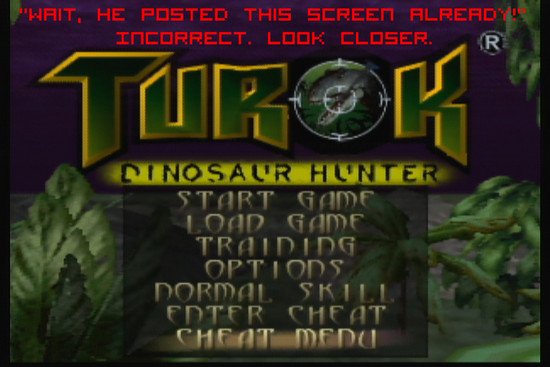 Next, go to the suddenly unlocked Cheat Menu option, again either on the main menu or the pause menu. 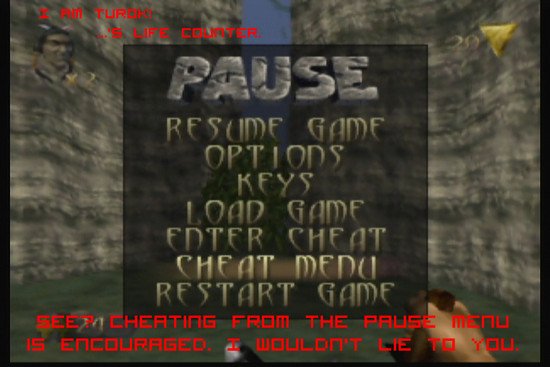 How awesome is this secret? 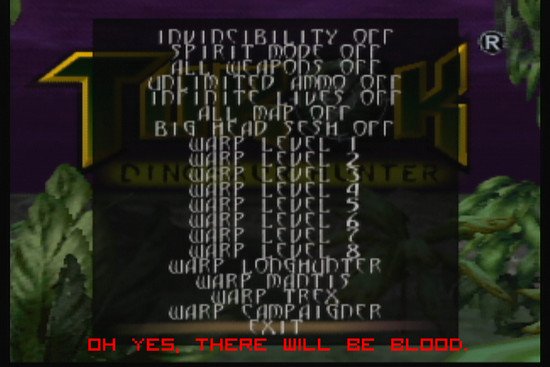 Doom had an invincibility code. It also had an “all weapons” code and a code for infinite ammo. It had a level select, and a full map reveal.

But I’m lazy, and Turok understands this (unlike Hamza). That’s why there exists one code to unlock all of these things at once. Oh, and just for good measure, it also unlocks the bullet time-esque “Spirit Mode,” normally a limited-time effect gained from strategically placed power-up icons. As if that weren’t enough, what Nintendo 64 game would be complete without a Big Head code? Super Mario 64 and Zelda, apparently, but not many others. Turok understands this as well and if you’re going to have the balls to call a code The Big Cheat, you might as well erase any doubt by throwing in big head mode as one of doors the code opens.

Much of the awesomeosity of this code comes from the fact that the weapons in Turok: Dinosaur Hunter are pretty damn cool and ammo for the coolest ones is incredibly scarce. This was the first game I ever played where two of the weapons were essentially tactical nukes and unleashing that raw destruction upon a group of enemies in a blinding flash was one of the best times I had in the early months of owning my Nintendo 64. In particular, there’s the Chronoscepter, the last weapon in the game that can only be obtained by collecting all of its parts scattered across the eight levels with the last one coming just before the final boss. No extra ammunition exists for this weapon; it comes with just three shots normally and that’s it. The Big Cheat instantly allows you to toy around with this ridiculously powerful gun at will, whether to take down that damn T-Rex boss with the frickin’ laser beam on his head or disprove the myth that cockroaches would survive a nuclear war.

There are a few cheats in Turok that are not unlocked by this code, but except for a few they are “fun” cheats like Big Head Mode which don’t do much to affect gameplay. The Big Cheat unlocks every cheat you would expect from a first-person shooter, more than enough to allow a player to rampage through the entire game and obliterate all four bosses over and over and over because they suck and deserve to die! die! die! and who’s laughing now, Dad?

[Oh, right. Now comes the part of the article where I elaborate more and attempt (usually miserably) to imbue the topic with somewhat more significance than it would be given in a strategy guide or on GameFAQs’ cheat page for the game.]

I’m sorry, who are you again? I didn’t catch that.

Beyond its effects within Turok’s game world, The Big Cheat was a harbinger of a trend on the Nintendo 64. As I noted when I started this series, secrets have been a part of games since almost the beginning. However, as the Nintendo 64’s library grew, it seemed to me that almost every game that came out had a large number of cheats. It’s quite possible that I’m biased on this point, as the Nintendo 64 era marked the first time I ever subscribed to a game magazine (Nintendo Power) and thus was the first console generation that I was acutely aware of all the cheat codes that existed for games throughout the life of the machine.

Previously, NBA Jam and Mortal Kombat certainly showed that the concept of cramming games full of secrets wasn’t a new idea. Now that I’ve brought those two games up, it’s worth mentioning briefly that Midway Games supported the Nintendo 64 heavily from the beginning (before it was even released, in fact … remember the Ultra 64 logo on the Cruis’n USA arcade machine?) and brought their penchant for filling arcade games with more secrets than there are coins in Scrooge McDuck’s money bin to their N64 releases, both originals and ports of their arcade games. I’ll be getting to them in future installments, for sure, but for now Midway’s extensive N64 support serves as strong evidence for this trend’s existence.

Even if I were incorrect (which I’m not) about the Nintendo 64 library’s rich cheat density compared to the systems that came before (or were its contemporaries), it would be hard to argue that things have not changed in subsequent console generations. Off the top of your head, can you name five games from the last five years where you entered a cheat code, let alone several? What was the last game you played that had a Big Cheat that unlocked several things at once?

There are a number of possible reasons for this shift away from including cheats in games, but that’s another wall of text that I’ll spare Mr. CTZ from proofreading. For now, I look back fondly on The Big Cheat and the other cheats in Turok and all the fun I had with them.

*Bonus Secret: The meaning of The Big Cheat*

I was always puzzled by the meaning of the letters that make up The Big Cheat. Because it seemed so random to me, and was fairly long, I tried to make up a mnemonic device to help me remember it so I didn’t have to grab my Tips And Tricks Videogame Codebook or an issue of Nintendo Power every time I wanted to enter it, nor write it down on a slip of paper to keep by the system and eventually lose. I had noticed that a couple of the other codes actually had meanings that could be deciphered– BLLTSRRFRND (Bullets are your friend) was the code for infinite ammo, SNFFRR (Saturday Night Fever) unlocked Disco Mode. But NTHGTHDGDCRTDTRK eluded my decryption attempts, though I was able to half-ass something that achieved my original goal to remember it.

Anyway, having not played the game for some time, I had to look up the actual code once more in order to write this article. I started trying to decipher it again, but couldn’t get anything. “NTHG … nothing … nothing the damn … no, that can’t be it …. ” And then, in a flash, I had it. I figured it all out, a mere moment after abandoning “nothing” as a possibility for the first group of letters: 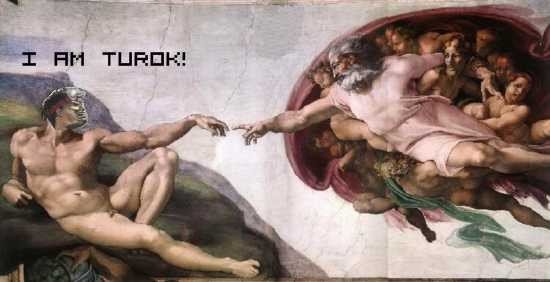 If you’ve ever been bothered by this like I have, I’m happy to announce that our long national nightmare is over.

Previous Cases, for the benefit of those who hit the comments button and thus blew completely by the first link.