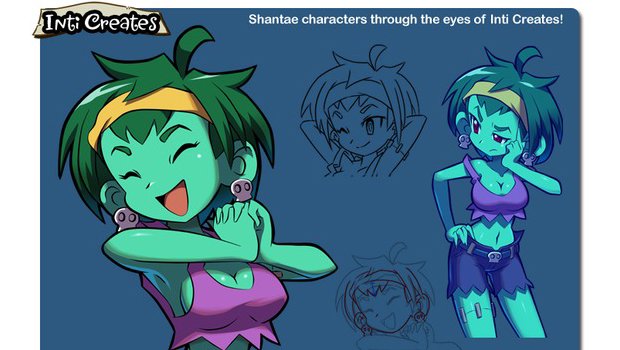 We all owe WayForward an apology. We haven’t been paying the Kickstarter for Shantae: Half-Genie Hero much attention because Mighty No. 9 gobbled up everyone’s focus. I knew weeks in advance that WayForward was planning to launch some kind of Kickstarter after PAX ended, but no one could have predicted Inafune’s reveal. The timing was unfortunate, and I hope it doesn’t mean the campaign won’t hit those delicious-looking stretch goals.

Thankfully, WayForward had an ace up its sleeve! Announced in today’s update, Mighty No. 9 and Mega Man Zero developer Inti Creates is collaborating with WayForward on not only Half-Genie Hero but also Shantae and the Pirate’s Curse for 3DS. It seems that Inti Creates is in charge of key artwork, concepts, and character illustrations, which would explain the new incidental art we saw in our hands-on with Pirate’s Curse.

Inti Creates artist Makoto “KOU” Yabe has redone all the characters for Pirate’s Curse and is helping with backgrounds for Half-Genie Hero, as you can see in the gallery below. KOU is just another amazing talent from the Half-Genie Hero art crew which includes background designer Gigi. D.G., best known for her webcomic Cucumber Quest, and animator Mariel Cartwright, fresh from her work on Skullgirls.

If you haven’t donated yet, maybe you probably should. You still have 16 days!