With Blacklight, Zombie hopes to push the bar for quality standards for downloaded titles, calling it “one of the most advanced games ever released solely through downloadable channels.” Using the Unreal Engine 3.0 and packed with deep multiplayer features you’d expect from a full retail title, it certainly seems like the Seattle, Washington-based developer is on the right track.

I had a chance to speak with Blacklight: Tango Down lead designer and project lead Jared Gerritzen. He reveals more info on the game’s multiplayer-focused experience, competing in a first-person shooter world alongside games like Modern Warfare and Bad Company, and why the game’s science fiction looks may be closer to reality than you think.

Looking at it, it appears Blacklight: Tango Down has a very science fiction feel. But the truth is, the tech in the game is based on some fact, am I right?

We wanted to make a game that was grounded in today’s facts, but still fantastic in some manners. With that in mind, we really focused on science-fact rather than science fiction. We don’t have crazy laser death rays or force shields — those kinds of things would have chagrined some of the members on the team.

We took items that are on the bleeding edge of technology in the real world today and guessed what the next step for those developments would be. For example, today’s military is using GPS and satellite intelligence to keep track of soldiers. We took that idea and thought… what if all this data could somehow be implemented everywhere? In Blacklight: Tango Down, that is how our HRV (Hyper Reality Vision) was born. HRV uses all of the environmental data available to compile the location of enemies and friendly soldiers and give you the ability to see things that would otherwise be impossible, all with up-to-date combat information.

The weapons in Blacklight: Tango Down are also science-fact and are based off of the new generation of weapons currently in development or about to be deployed. In the game, the ability to customize the weapon gives the soldier the advantage of being able to change the specs on a per-mission basis.  This customization ability also creates a massive amount of weapon configurations, and thus, provides the game with more replay value. 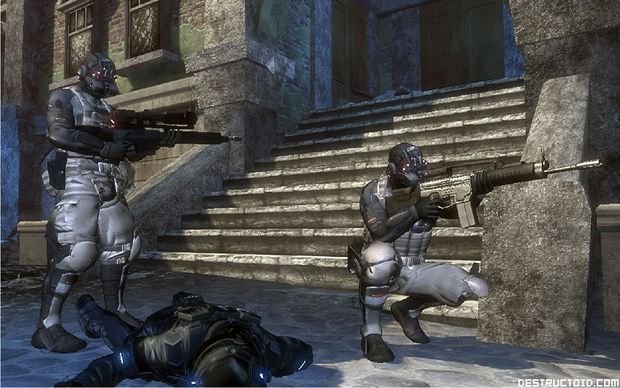 Tell me a bit about the game’s story, and how that will bring players into the world of Blacklight.

Blacklight as a universe is extremely deep. Blacklight: Tango Down is going to be the first look into this fictional world.  As a multiplayer-focused game we’ve been trying to get as much of the world into the game itself. Thus we tell the story through the environments and hint at what the overall universe really is. As Blacklight progresses, we will give the fans more story information of what’s happening and what will happen next. Other media projects will also be a huge part of telling the story.

From what I understand about the game’s multiplayer,  it seems it will feature an experience system, similar to that of Modern Warfare 2. As a frame of reference, how will it be similar, and what sets it apart?

The entire Blacklight: Tango Down team is made up of hardcore shooter fans, and from the beginning of the project, we decided to keep the game types simple and not go down the road of new, experimental game types that no one ever ends up playing anyway. So to that end, we have several game types the typical shooter fan has come accustomed to, but with alterations to make it feel fresh.

For example, rather than holding a zone by standing still and waiting for a clock to tick down, we’ve added hacking mini games to provide more of a frantic feel to completing objective. You have to use your brain and be quick and steady rather than just hiding and idling until you capture a point.

Now, I know people out there are immediately saying: “WHAT THE HELL! MINI-GAMES!?!”  I know this because a few guys on the team said that as well. But after a few rounds of play testing the game, those same guys ended up saying that having an additional challenge at  key points was really fun and a refreshing change of pace from the same old thing that everyone else has been doing for years. Believe me, if we didn’t think it was fun than we would have taken it out immediately after testing it. 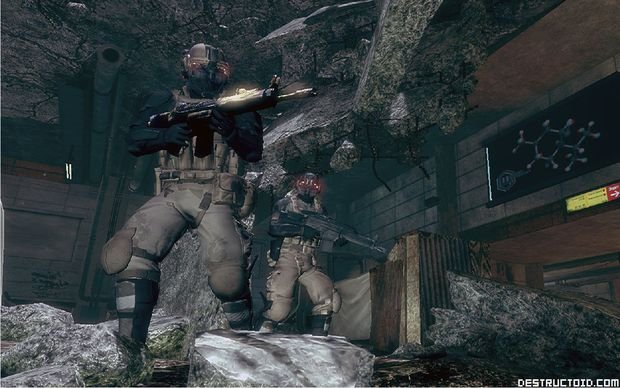 I know very little about the factions in terms of how they’ll affect gameplay, and just how different they are. Tell me a bit about those.

Essentially, the factions in Blacklight: Tango Down are only visually different; both sides function and play the same. When you unlock a new class on one side it unlocks its doppelganger on the other. We wanted to keep the factions similar to make sure teams are as balanced as possible, rather than people leaning to one side over the other because they play differently or there are unintended advantages. The players can change their equipment and weapons to suit their play styles and desires and that is where I think the variety of gameplay some players are looking for will be found.

You look at the first-person shooter landscape right now, and there’s a pretty obvious divide, with Modern Warfare 2 players on one side, and Battlefield players on the other. Those two games are obviously kind of vying for the piece of the market — where do you think Blacklight fits in there? Do you feel that, because of its focus on “science fact” and future weapons, that it has its own place? Or are you confident that the Blacklight multiplayer experience is unique and strong enough that it could possibly pull people away from Infinity Ward’s and DICE’s shooters?

The funny thing is, if I was doing this interview in five months, you would have Halo replacing one of the other names in the question. I really see Blacklight: Tango Down fitting right between the hardcore reality shooter, Call of Duty, Battlefield: Bad Company, and sci-fi shooter, Halo. Not only different in the game visually but in the gameplay itself. Blacklight: Tango Down isn’t a creep and shoot game and it’s not a run and gun, it is right in the middle. Fast paced combat with a touch of realism.

As far as the shooter landscape being full of great games; people will always want to play something new. If not, I would still be playing Battlefield 2 and not getting my work done. I think with the price point being what it is — $15 — means Blacklight: Tango Down will be a great game for someone to just pick up and play with their friends. I mean, some games that have already taken 60 bucks from you are charging you $15 for just a few bonus maps.

People are going to discover that Blacklight: Tango Down is a fun and engaging FPS and an amazing downloadable game — more fully featured and advanced than anything else available through download channels. Hopefully these people will get their non-hardcore shooter friends to download and play it with them as well. I love all the shooters that come out; the trick is just getting my friends to buy them too, which can be kind of hard when the cost of entry is too high. 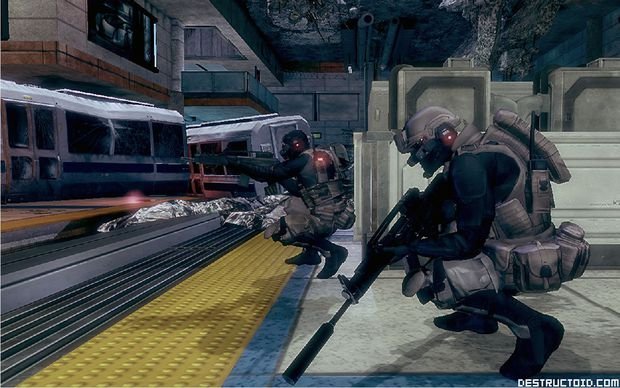 The decision to go with digital distribution is an interesting one, particularly because of how big the scope of Blacklight appears to be. It definitely seems like it could be a full retail title. A lot of developers and publishers seem to be turning to digital — why did you guys make the decision, and do you feel that this type of model is the future of gaming?

Well, thank you for saying it seems like it could be full price. Frankly, we agree. We’ve got Unreal Engine 3.0 graphics, tons of modes and maps, and a fantastic and varied multiplayer experience full of customizations and upgrades. This has been our goal from the start – to deliver to players a great experience at a low cost – a fully featured multiplayer FPS at a downloadable price point.

We believe digital distribution is the next step in the industry. When was the last time you went to a music store to buy a CD? The reality is that downloadable distribution really makes things a lot simpler for a developer, cutting out things like shipping, manufacturing, packaging and more.  There is no reason why downloadable games have to remain in the form of nostalgic games from the 80s or early 90s or titles with simple graphics and small amounts of content.  Downloadable games are getting better and better, and the medium provides a great way to prove a new IP or a new team like ours. The idea of making smaller games and giving them the quality of the big boys really excited us. 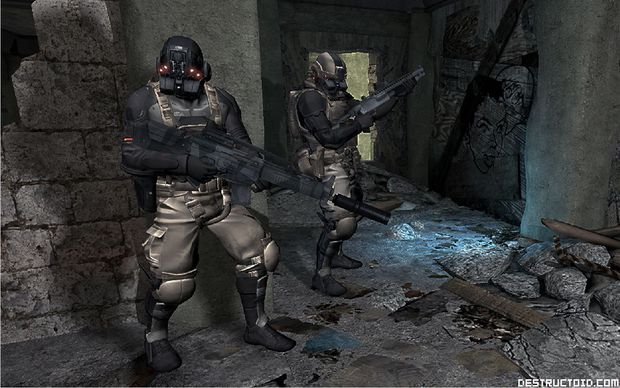 In terms of the game being a digital download, I think we are starting to see these types of titles reaching the point where they could definitely rival that of a retail title. Obviously, bandwidth is a concern — were there any corners you had to cut when using the Unreal Engine?

No. Unreal is a sweet engine. We have been working with UE3 since it first came out so many years ago and the time we have spent with the engine has allowed us to really get it figured out. The content development pipeline is great and my engineering team is an amazing group. We also recognize where the engine’s strengths are and our designers and creative people understand this and consequently we have built our game around those strengths. We really didn’t hit many snags, other than timelines.

How many multiplayer maps will the game ship with, and can players expect add-ons in the future?

We can’t really comment on this yet, but more info will be released soon. 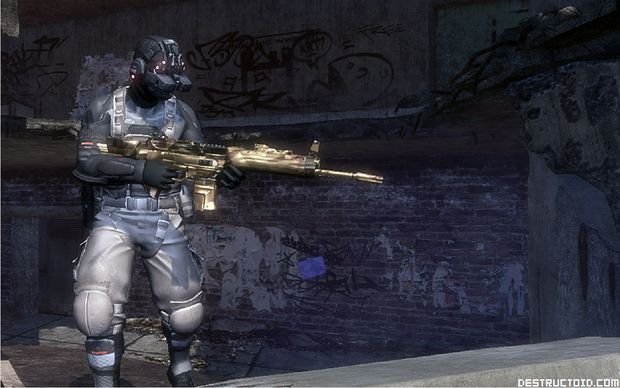 Have to ask… will the PC version support dedicated servers?

RRR… I know where this is going. No, we are keeping the interface unified with the consoles. However, to the PC guys, this is not a console-to-PC port. We’ve taken some major steps to make sure the PC experience is just as good — if not better — with a smoking PC.

Have you decided on pricing, and when can we expect Blacklight: Tango Down to be available?

Less than your lunch at most places; only 15 bucks and it’ll be out this summer.