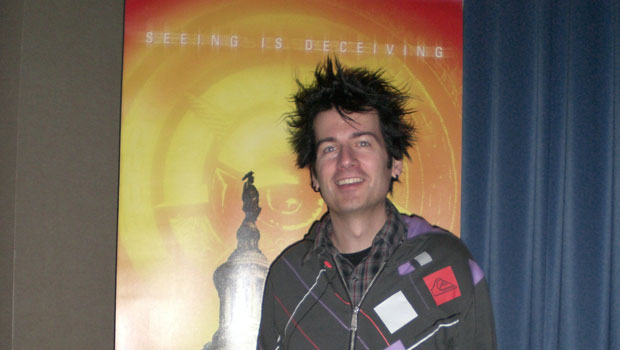 Things were not going well. At a recent “multiplayer” event for The Conduit, Sega and High Voltage reps were all over the place, trying their best to keep smiling.

It was all cell phones out, reset Wiis, unplug this, plug in that. Hell, at one moment, it looked like the stars aligned and all was going to go as planned, but, unfortunately, it was for nothing. The GameSpy servers powering the 12 player multiplayer for The Conduit were down. There was going to be no multiplayer that night. There were sad pandas all around, that’s for sure.

However, perhaps the most disappointed person at the event was Eric Nofsinger. He’s the Chief Creative Officer at High Voltage and working on The Conduit, a game many have been watching as the future of next-gen Wii games outside of Nintendo. In between the single-player demo and bites of risotto, I sat down with Eric to get a clarified explanation of the multiplayer portion game. Game modes, voice chat, Friend Codes, and the future of The Conduit all came up.

Needless to say, while it isn’t exactly a hands-on of the multiplayer, it does bring clarity to a game many people have been wondering about.

Hit the jump for the interview.

DESTRUCTOID
So The Conduit is really a fairly important game, especially for third party developers for the Wii, as you guys have been really proactive in pushing the game to the limits of the Wii. Can you explain to me what you feel the multiplayer for The Conduit represents for the Wii?

ERIC NOFSINGER:
Obviously, I think you hit it on the head that we’re really trying to push the boundaries of the system and I think a big part of a first person shooter experience is the online component and being able to hook up with other folks and play in various different formats. If The Conduit was just a single player experience it would be a good game, but I think it would fall short of the promise to players for the definitive first person shooter experience for the Wii.

You know, we want this to be a great experience, and multiplayer is a part of this. For us, we needed to minimally hit the base means, which were Capture the flag, deathmatch, team deathmatch. For a long while, that’s all we kind of announced to folks, but what we are doing silently behind the scenes, well internally, not so silently [laughs], there were a lot of heated talks, looking at a lot of  different games, but what we ended up with was 13 different modes, 9 multiplayer maps. We ended up incorporating weapon pack sets of our 18 different weapons. We’ve got team modes, individual modes, quick matches, marathon matches, and a lot of unique modes, such as Bounty Hunter and ASE [All Seeing Eye] football.

Could you describe those?

Yeah, ASE football is just longest time with ASE in your possession. Bounty Hunter is killing your target for points or kill those hunting you, but basically you have to fit certain roles. It’s a color-coded system. Some of those modes are classic sort of modes folks have come to expect based off of other first person shooters, and other ones are a little more fringe, but they are ones that we felt are interesting and have a place in The Conduit universe. You know, we figured, “why not?”

A lot of what we are trying to do with the multiplayer experience is what we are trying to do with the single player experience, and that is to give people a lot of options, a lot of choices. We didn’t want to just say “this is it, this is all you get is this one little sliver”. By doing that, by giving people the variety, we think it’s going to give it a lot more legs. People are going to be able to play this for a long time, and play different ways and by the time they get tired of this, we’ll have something new for them to play.

The Wii is known for being a difficult system to deal with when you are dealing with online stuff, that is can do it, but with the Wii Friend Codes, it’s not bad, it’s just…different. Can you describe the experience players are going to have to play with their friends online? What are they going to have to do?

Definitely that was an area we worked closely with Nintendo on and we recognize that they had a lot of concerns for privacy and predatory issues and that sort of thing. We needed to be cognizant of that. And there weren’t a lot of templates for us to follow with previous online Wii titles. One game we did look at very heavily that we thought was a decent experience was Mario Kart, which was certainly improved over Smash Bros, which was not so good to get in and play. We think we’ve come up with something that is more elegant than Mario Kart, but it’s along the same kind of experience for gamers  to get in and play.

What we really want to do is make sure that once you have things set-up, it’s easy to just hop on. You know, around our office, especially right now, we are doing nightly, even within the team, multiplayer experiences. Of course Sega is running tons of online multiplayer, and it’s pretty straightforward to hop in and start playing right away. We’ve got a lot of modes for quick match, and things like that, so you can get in and start playing.

How do you address the communication issue with the Wii?

That’s a great question. One of the things that we did was incorporate WiiSpeak. We fully support WiiSpeak. It’s so cool, but it was a bear. It’s a neat device, but there were things we needed to sort out. How do you play with 11 other people and everyone is talking at the same time, is this going to be too much? So one of the things we incorporated is a system of inclusion, which allowed for the six players the closest to you are the ones you hear. It adds plausibility to it, realism that cuts down on some of that cross-chatter. We’ve found that it’s a really neat device, and a good fit for a first person shooter. We are excited about it. Every time we play with it, we play with WiiSpeak, so it’s worked out well for us.

Do you have to exchange Friend Codes to hear people speak to you?

We do have Friend Codes. It was something we wanted to make as elegant as possible, but while still working within the boundaries of Nintendo. I personally am not a fan of Friend Codes; however, I understand why they are there. As long as it’s not a pain in the butt to get it in there, and you don’t have to continually re-enter it or anything like that, I think folks will be fine with entering it once and away you go.

I know the Wii isn’t known for being DLC friendly, however, could we see DLC for The Conduit?

For The Conduit, there will not be downloadable content, but that’s something that’s definitely on our radar. With the version 4 update to the Wii, it’s incredible. I know for myself, I’m doing a lot more WiiWare right now, now that I have the space to put stuff on there. It’s definitely something we are aware that first-person shooter fans like is being able to download maps, download weapons, download new skins. It’s great for developers, as it’s a steady, incremental revenue streams, and it’s great for players, as it extends the gameplay in new and meaningful ways. All the way around, we are keenly aware, and it’s definitely something to keep an eye out for what we have cooking in the future.

So maybe for Conduit 2?

I think that would be safe to assume for something we are looking at for sequels. Knock on wood that we sell the ton of units  we are hoping to sell, people will be seeing a lot more versions of The Conduit in the future, and that would be something we’ve done with Conduit one. We’ve really listened to people, actively solicited feedback, and anyone who has done interviews with me in the past, or been to anyone of the events, they’ll frequently see me going around with a notepad, and writing stuff down. Our team has been dedicated to listening to that feedback. We go to the forums, we look at what people have to say about it. We can’t address everything, but we try to address everything that seems to be important to a lot of folks.

If we can get the majority of folks, and it we’ve earned their trust, by delivering on that, they’ll know that they can trust us moving forward that we’ll continue to listen to them and we’ll incorporate more. Our list of stuff for the future is not short, for sure, and I’ll say it for the Wii in general, I think we are really the first to push the system capabilities. It really is the tip of the iceberg. We’ve already uncovered a lot of new techniques that folks are going to be seeing from us. We’re going to have some really cool announcements around E3 and we’re really excited to show off some our new tech. One of our goals with The Conduit was to make a next-gen Wii experience, and I think we’ve delivered on that.

One of our goals moving forward is try to do some stuff that is pretty rare or completely unheard of on competing systems altogether. I think we are going to deliver on some of that.