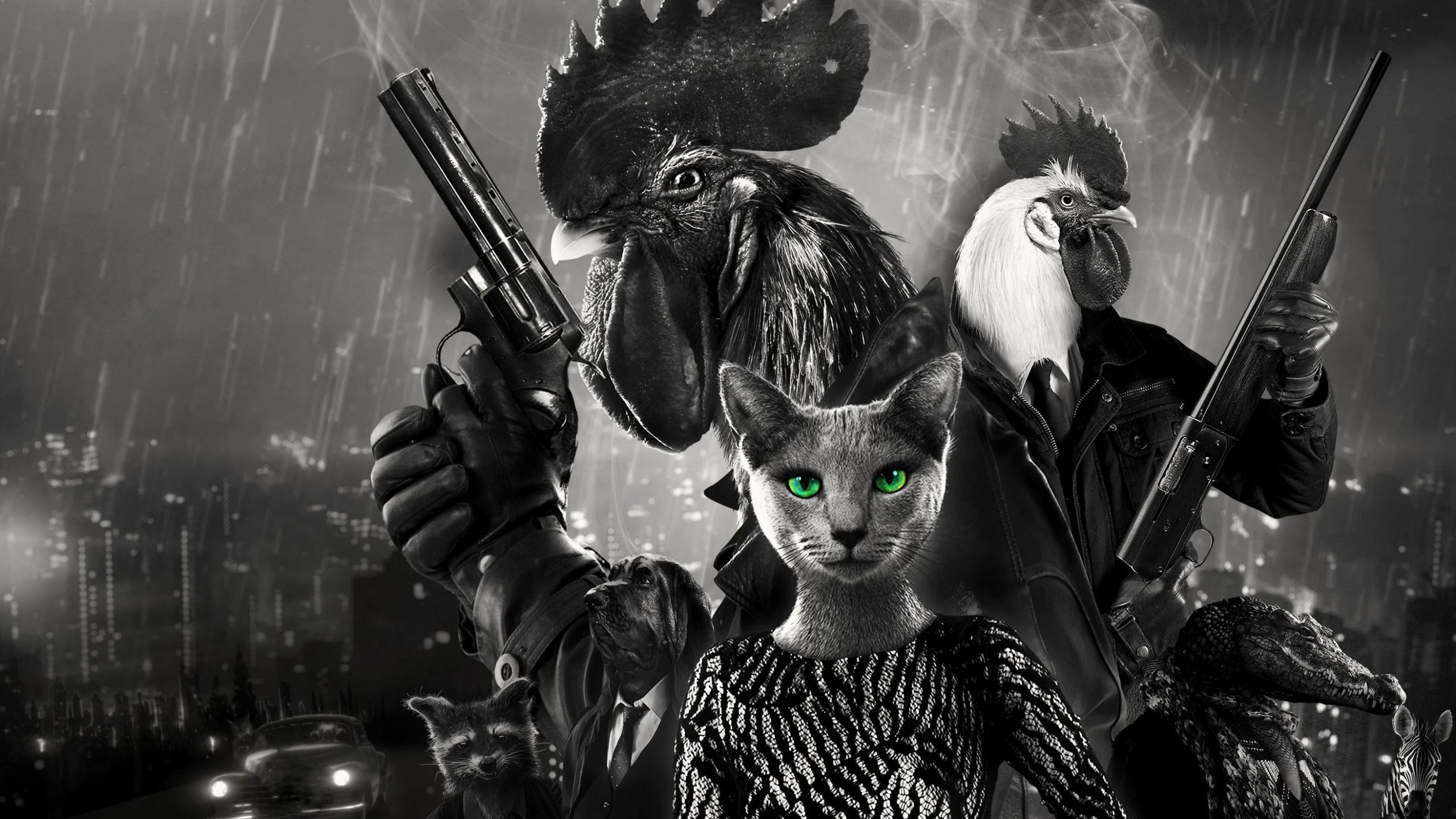 It took me all of five seconds to decide I wanted to highlight Chicken Police: Paint it Red and, like, three months to finally finish it. That’s not damnation for the game, that’s a self-deprecating look at my priorities and attention span.

No, Chicken Police is fantastic. I came to that conclusion every time I’d pop it open. Just look at it. It’s an intoxicating vortex of photomanipulation, featuring animal people pasted over film noir backdrops. The costumes are absolutely amazing, and I can’t believe I’m saying that about any game. It’s aesthetically wondrous, and beneath that is an unrestrained creative approach to the visual novel genre. 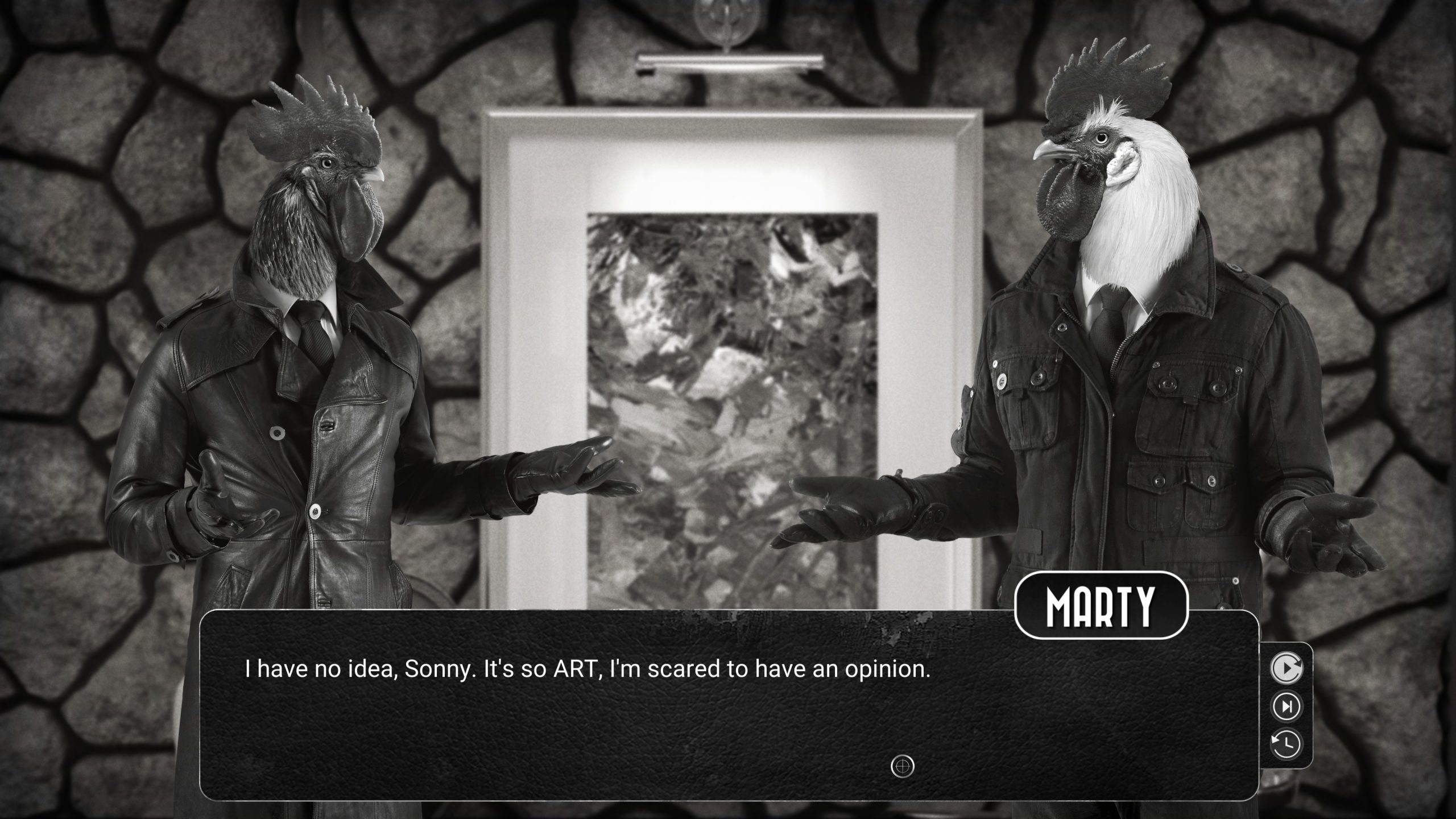 Released November 5, 2020, Chicken Police: Paint it Red flew under my radar. November 2020 is just a depressing fog to me, so I’m not entirely surprised. Still, I’m kicking myself. As I said about Backbone, I am down for noir featuring anthropomorphic animals. It adds a quick splash of color to the characters and allows for some interesting worldbuilding.

Chicken Police has that in spades. It takes place in Clawville where predators and prey live in peace amongst each other. That’s going about as well as you’d expect: it’s a powderkeg waiting for the right match. The king is a figurehead, the police have been bought and sold, and predation is a constant concern for those who are more molars than canines.

Amidst this is the legendary Chicken Police; or “was” is more appropriate. After a fallout a year ago, Santino “Sonny” Featherland is on suspension, waiting for retirement (just 121 more days) and Martin “Marty” MacChicken has been brooding away in the firing range. When a new case drops into Sonny’s lap that smells like vintage eggs, he knows he can only handle it by reuniting with his old partner for some extracurricular work. 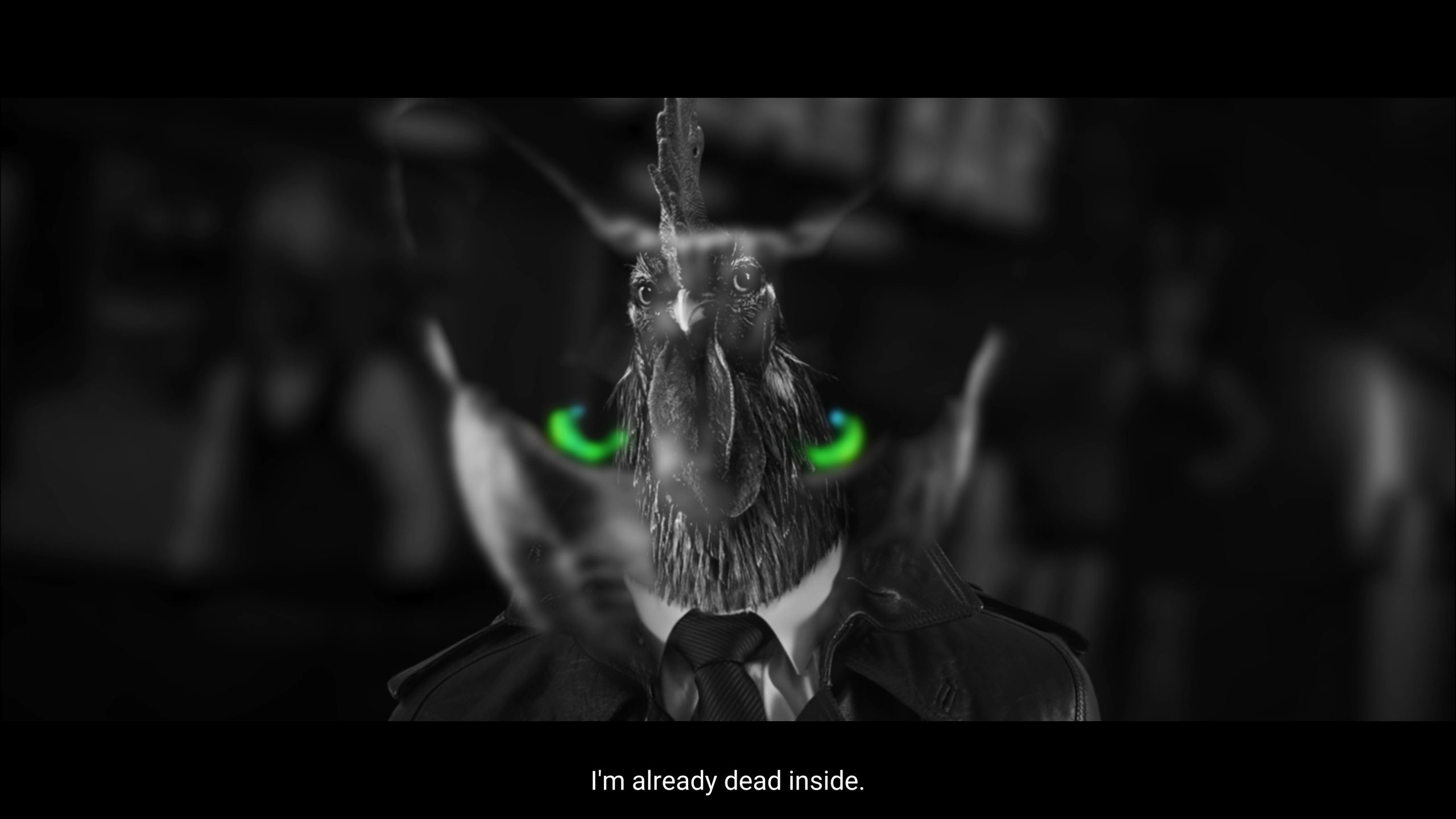 The premise sounds ridiculous, and the developers obviously had a lot of fun with it, but it doesn’t take away from the seriousness of its themes. It’s filled with witty and amusing dialogue without delving into Police Squad territory. The characters feel lively, but not wacky or overly archetypal, and it comes together in a satisfying package.

One of the most charming parts of its dialogue is that animal analogies that exist in the real world, are still mixed into Clawville’s common parlance, but with racist undertones. So, someone may compare a person to vermin, but, oh wait, they’re not prejudiced against rats, they swear.

The amusing banter is helpful because the dialogue is largely linear. You point and click on who you want to talk to and who you want to look at, but there really isn’t any meaningful choice to make. To make up for this and to distinguish itself from other visual novels, there is a smattering of mini-games. They’re pretty clever, involving untying a knot by following the rope or zipping up a woman’s dress. They don’t pop up too often, but they’re always worth seeing and never intrusive. 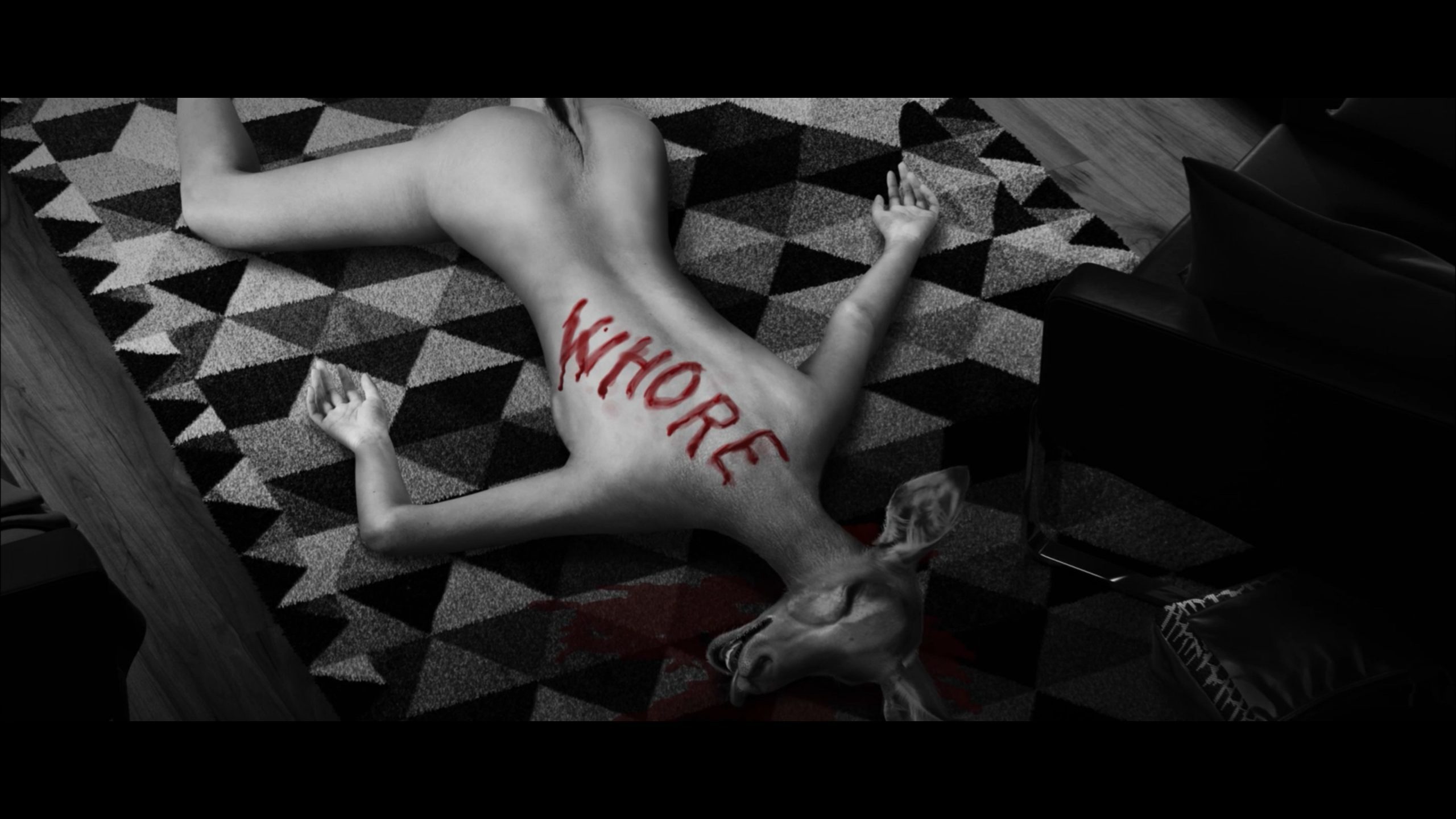 What I find most striking about Chicken Police is its pervasive passion. For starters, it’s just a slick-looking game. I can’t imagine the art style being nailed any more effectively. It’s slightly askew, the weird vignetted black and white with blotches of color where appropriate. Even the interface is completely rock-solid, something that’s often taken for granted. It’s stylish while still being very organized and responsive.

It’s filled with these small touches that help bring flesh to the world. The Chicken Police were of such legend that a series of pulp novels were written about them, and these are scattered about the scenes. I found myself snapping a screenshot every time I’d locate one, just because the covers and titles are all well done.

There are little smatterings of references to the noir subject matter that inspired it, slightly twisted by the lens of the world’s animal inhabitants. There are also subtle references to classic adventure games, which is warming to someone like me who is passionate about video games first and about film rarely. 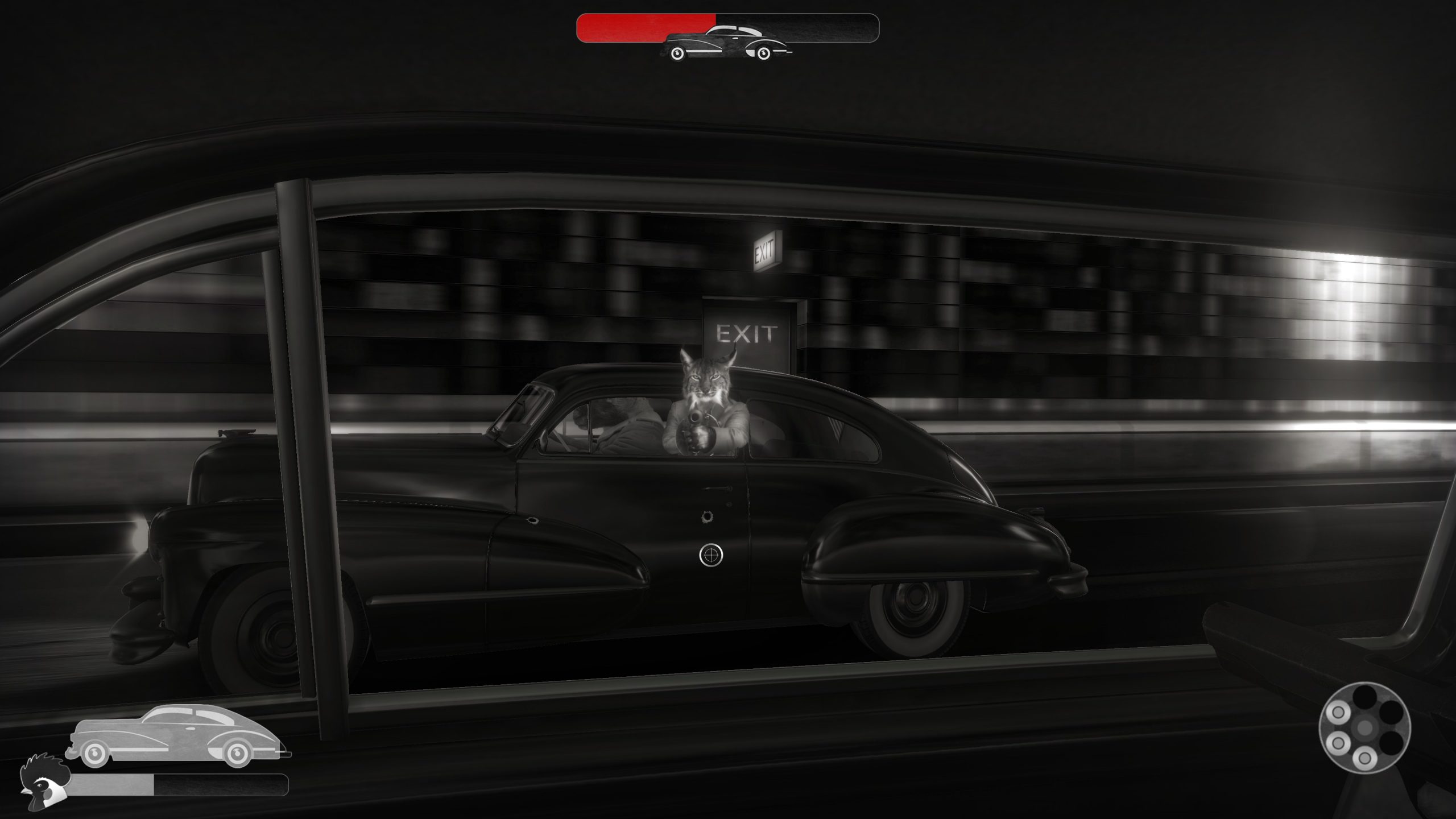 The game carries a strangely light-hearted tone for noir, but it’s not completely out of whack. It’s less that its themes or narrative are dumbed down, and more that the characters just glow from their warmth. The dialog isn’t strictly dour, though there certainly is some of that, but the way the characters lift each other up is a strangely welcome twist on the formula.

Indeed, the narrative isn’t as fatalist as noir can often get, and I almost feel that this is unintentional. There isn’t a terribly high body count by the end of the game, and it almost feels as though the writer fell in love with the characters and just couldn’t watch them die en masse. Or maybe they’re just not that much of a downer. Or maybe that just wasn’t the tone they were going for.

It isn’t perfect, however. There were a few moments where I had to mill about old areas for how to proceed. some character that I didn’t talk to, some item that I didn’t investigate. It wasn’t anything too intrusive, but it was, at times, somewhat disruptive.

There are also some issues with the script, or perhaps it’s more accurate to say that it’s with the translation. The team is from Hungary, after all. However, you’ll see a scattered amount of typos and issues with typesetting. Other times, the written dialog doesn’t jive with the voiceover. It’s not enough to kill the enjoyment of the experience, but for a visual novel, it can be intrusive. 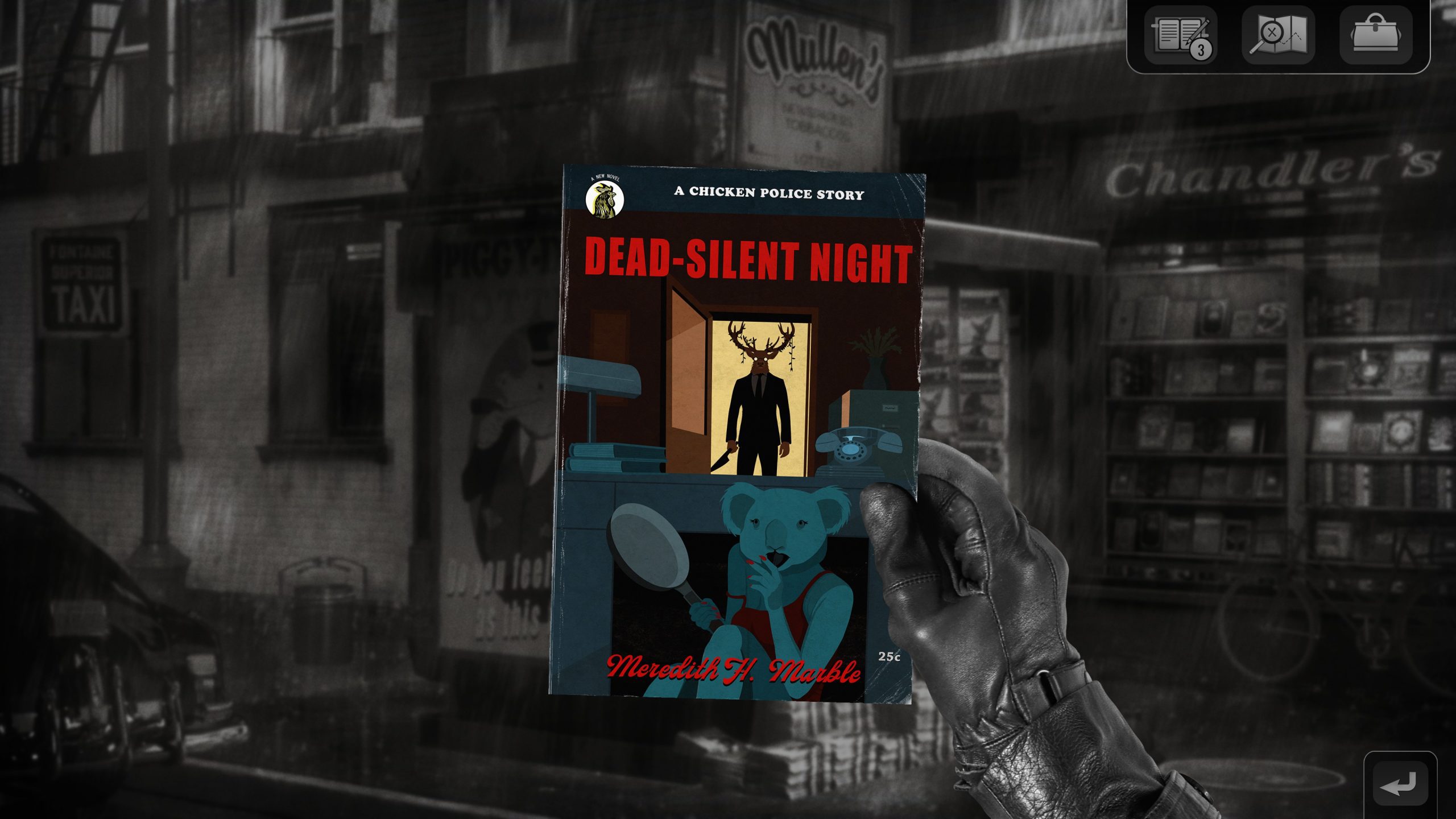 As a writer, I’m jealous of the vibrancy in Chicken Police: Paint it Red. The genre is classically ambiguous and grey with its characters, so it’s unique to see it pulled off with such likable characters. It’s not something that should work, but it does.

It’s also deftly pulled off. While there are typos to step over, the voice work is wonderful and the art is euphoric. I could look at the screenshots I took all day and just revel in their realistic but off-kilter appearance. It was made by an obviously passionate team, and that’s what kept me playing through it… Though, perhaps at a slower pace than I intended.

There’s an upcoming physical version for Switch, PS4, and PC. It’s also available digitally on Xbox One. On the way is a “Director’s Cluck” update that will add some quality of life improvements, additional gameplay, and bug (hopefully text) fixes.

I may be late at catching a glimpse for this adventure of the Chicken Police, but you can count me in for their next case.