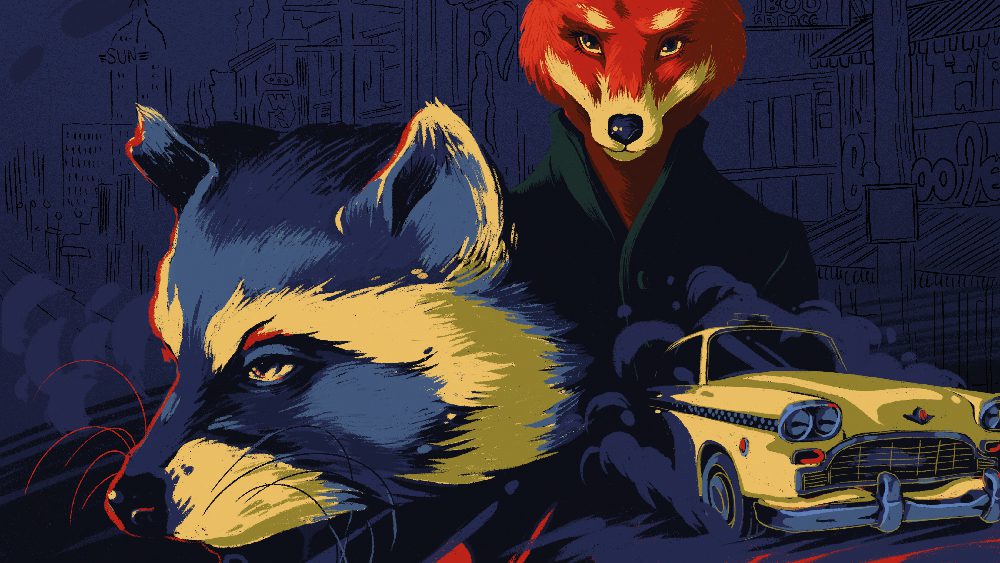 The big fish eat the little ones

Here’s a trend you may not have noticed: noir games featuring anthropomorphic animals. Blacksad in 2019, Chicken Police: Paint It Red in 2020, and now Backbone in 2021. I’m not complaining, it’s just a weird pattern I’ve noticed. Each one has caught my eye because I’m an invested fan of… Noir.

It’s a fun genre; seedy locations, dangerous dames, and moral ambiguity. Sometimes things don’t end well because, Jake, it’s Chinatown, and other times they don’t end well because the dame was the murderer all along. Some may balk at the use of anthropomorphic animals because of preconceptions towards a certain prominent internet community, but it is, and always has been, a good way to add a splash of topcoat to the cast.

But what lies beneath all that fur? 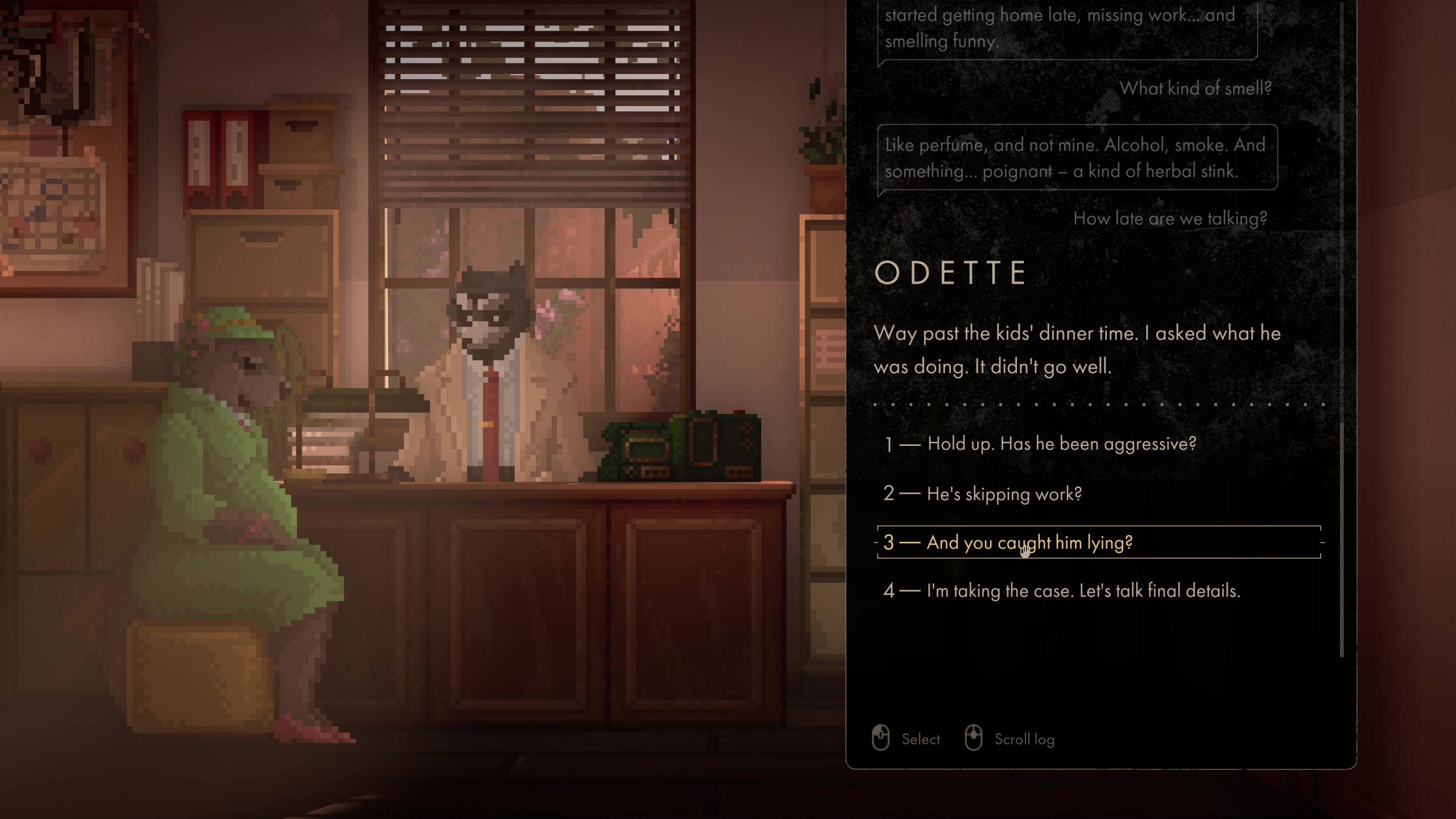 Modern noir or “neo noir” or “post-noir” is often hit or miss. A lot of it has been boiled down to just being about a detective or private investigator that does their own narration and solves mysteries beneath a grayscale filter. That’s definitely how Backbone starts — well, sans the grayscale filter — but the way it proceeds is a lot more accurate to the genre, just twisted to fit its setting and themes.

Here we have dystopian Vancouver, BC, referred to in-game simply as “the City.” It’s inhabited by a vast assortment of anthropomorphic animals, but they’re beneath a ruling class of apes. The City is also surrounded by an insurmountable wall and no one is really certain of what’s outside of it.

You play as Howard Lotor, a private detective who is also a raccoon. Used to taking on cases for wives who suspect their husbands of infidelity, Howard is thrust into the midst of a conspiracy when he finds his target in the midst of being butchered. This puts him directly at odds with a crime lord and the city’s aristocracy. 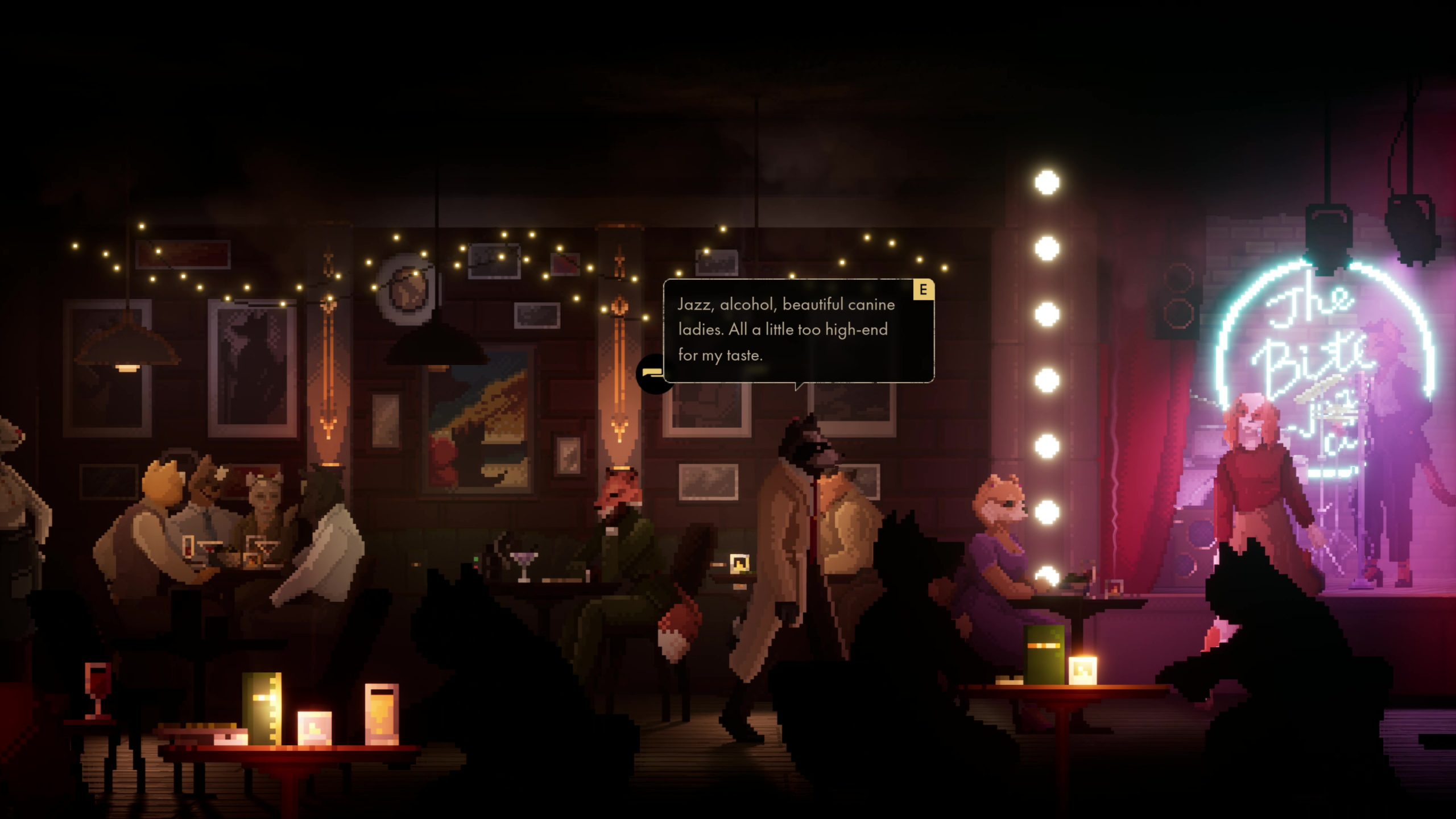 I mean, that’s how Backbone starts. The story takes a pretty tight turn down some dark territory later on that upsets the whole narrative. It’s still thematically about seeking freedom within a cage, but it severely diverges from the whole “simple detective against a monolithic foe,” angle. That sort of fatalism isn’t rare for noir, this one just kind of goes bananas.

The gameplay itself is a pretty simple take on the point-and-click genre. You’re generally locked on a single axis and can pace back and forth between the two extremes until you see an interaction prompt pop up. Then you can talk to people, open doors, or press buttons. It helps prevent things from becoming a pixel hunt, but it is kind of simple. You can’t miss anything because everything pops up under an icon.

There’s also some sneaking included, but this doesn’t show up as often as the first act implies it might. It too is incredibly simple, consisting entirely of staying out of line of sight and using objects in the environment to distract guards. Failure just means trying again, so the stakes are low, but I suppose it’s a reasonable change of pace. 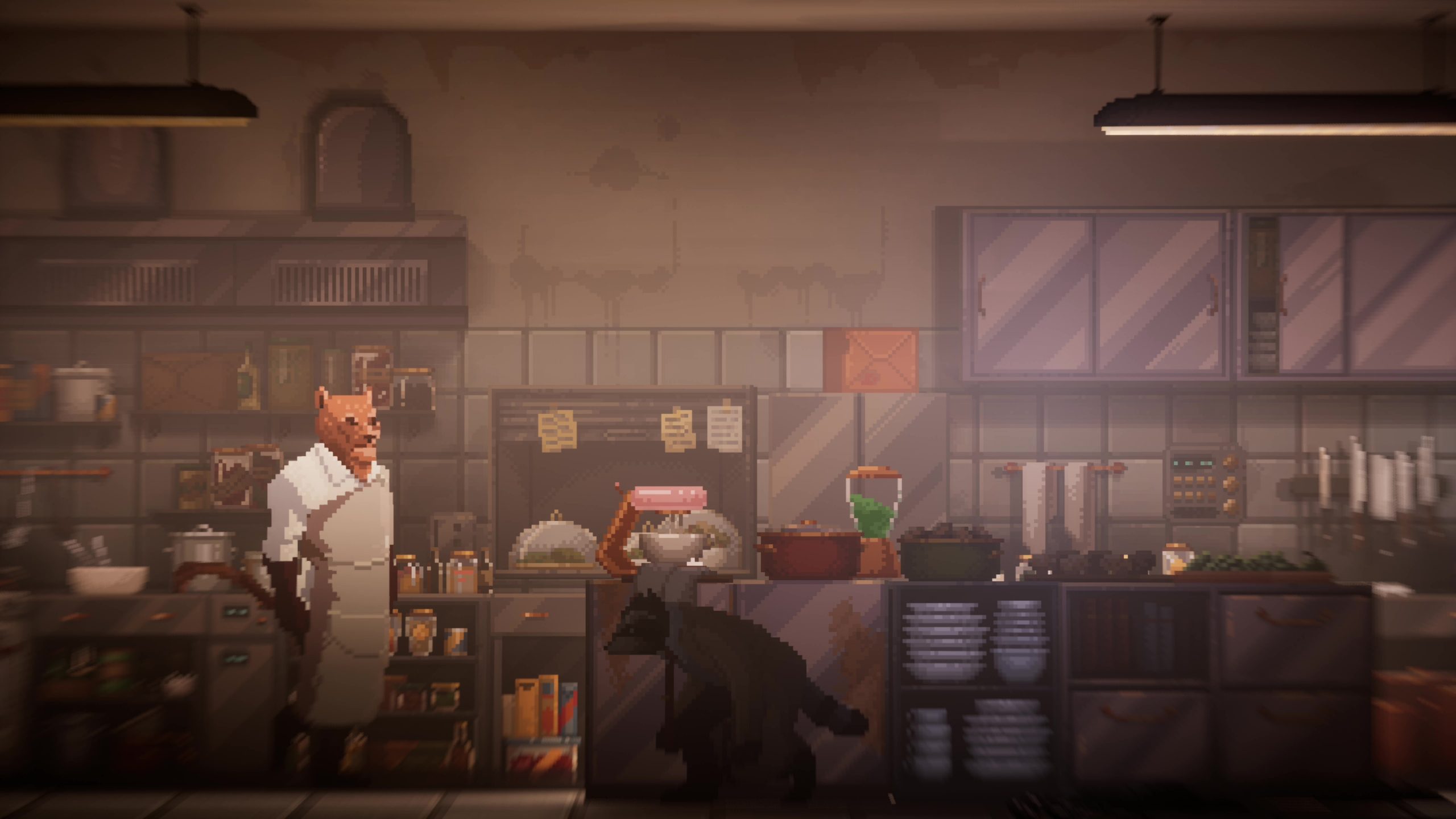 Backbone’s graphics are an interesting merger of pixel art against 3D backgrounds. At a glance, it’s hard to tell that the game is even in 3D, as everything is presented from a direct angle and can appear to just be a clever use of parallax layers. However, a closer look at the background shows interesting lighting effects and volumetric fog. There’s a lot more detail than you’d likely see in a regular pixel art game, with windows populated by people going about their business. It’s a pretty nice-looking title overall, with the world being the real star here.

The audio, on the other hand, isn’t quite so stellar. Don’t get me wrong, the advertised soundtrack is decent and fits the themes, but that’s only when it’s playing. A lot of the time, you’re submerged in complete silence. There’s no voiceover, so you might just be listening to your computer fans as you click through dialogue options. Even when you’re not in dialogue, the sound is sparse. No street noise, no distant chatter, no hum of activity. There might be footsteps, but I think it’s mixed so far into the background I never noticed.

I actually thought the silence might be caused by a bug, and perhaps that is the case. All I can tell you is I sat through a lot of eerie silence. My husband thought I was playing with headphones on, because he couldn’t hear anything for long swaths of time.

It’s just unusual, because Backbone has atmospheric music, it just doesn’t seem to use it a lot of the time. 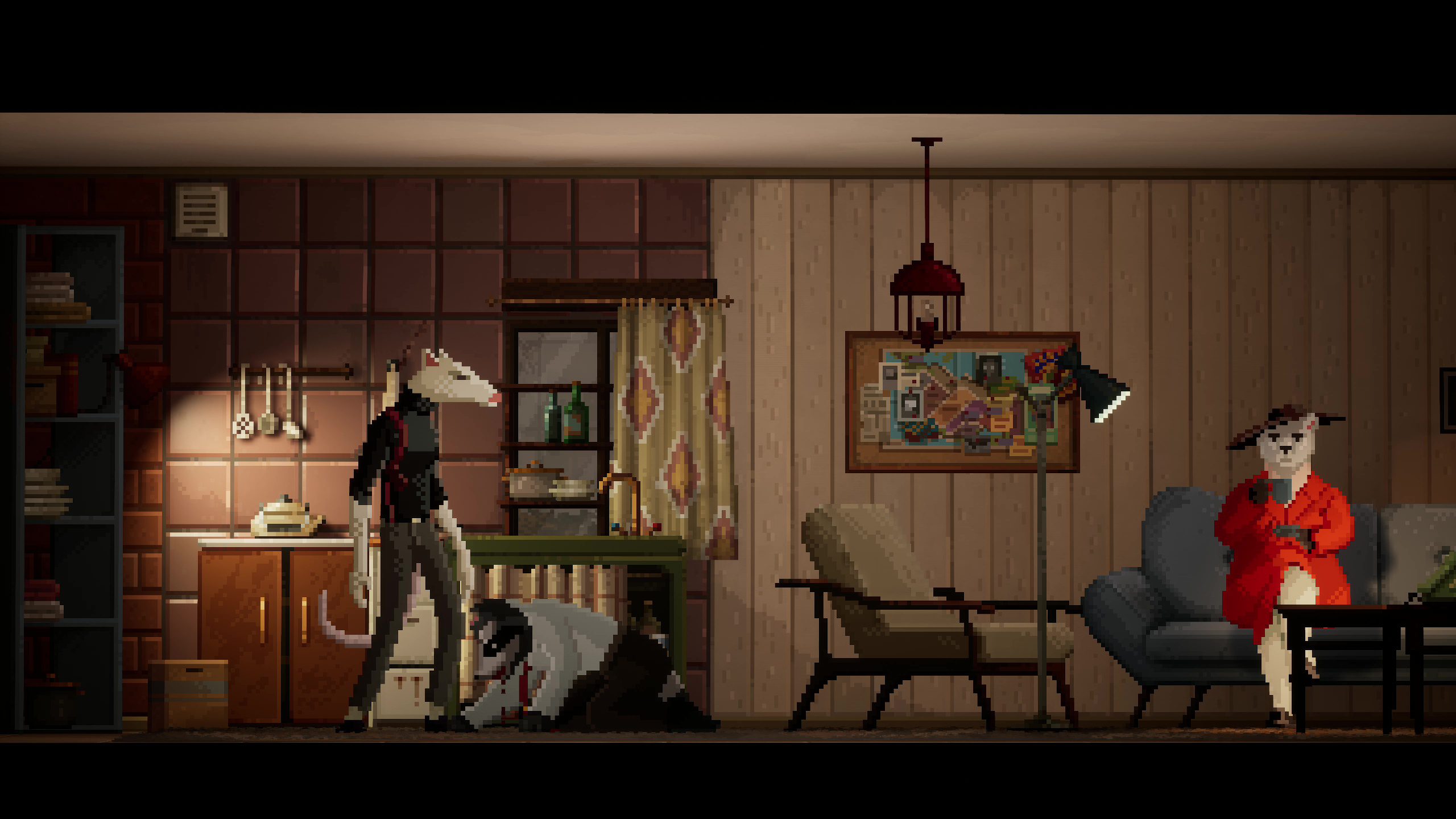 Centrally, Backbone is focused on its narrative, and it does that pretty well. A lot of the characters are relatable, the dialogue choices are sometimes difficult, and you have a lot of time to delve into the background of the world. It’s well-told, altogether.

My only complaint in terms of plot is that most of the love was given to the first act, which is provided for free. There’s a level of polish and complexity to it that the rest of the game doesn’t quite follow through with. I think the whole story was told as it was supposed to be, but it’s polished to a brighter gleam at the beginning, whereas later on, it’s not quite so glossy. Not offensively so, just enough to be noticeable.

As a whole, Backbone is stylish but not exceptional. It’s a good time with an enjoyable story, but otherwise it’s just kind of routine. The visual style is great, but it’s offset by uneven audio design. There’s definitely a lot to love about Backbone, I just don’t feel it sticks the landing quite well. It will be worthwhile playing for most, but I’m more interested in what comes next from EggNut.