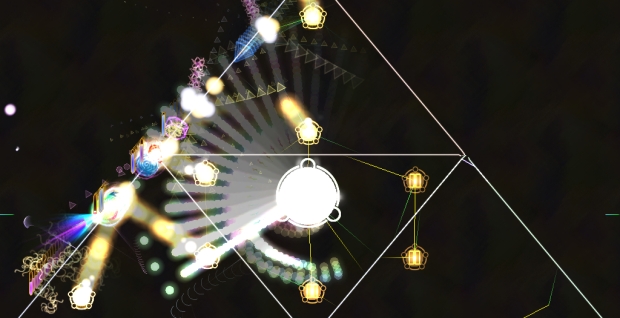 Or people who think they’re okay.

I’m basically trying to say that Immortal Defense is really good, and that you might enjoy playing it. You can get a demo here, or purchase the full game here.

I first tried ID a long time ago, but gave up after a few minutes of playing because I was evidently an idiot back then and couldn’t wrap my head around the absurdly intuitive and simple interface. Maybe the abstract graphics confused me, or something. I dunno. I’m not proud of myself.

A couple weeks ago, I got an email from a reader suggesting I check it out — not necessarily for the gameplay, he said, but because of what he felt was a fantastic story.

So I downloaded the demo. Beat it. Bought the full game. Beat it.

The story is delivered through text-based dialogue at the beginning of each level (one might be tempted to compare it to Braid, but given that the story acts as a reward for successful level completion the narrative bits feel more like the full-motion cut scenes from the Command and Conquer games), and basically explains that you, the protagonist, have given up your body so that your spirit can fight on the ethereal plane and defend your planet against an alien invasion. The story is unobtrusive, well-written, and pleasantly minimalist.

That said, I don’t know ID‘s narrative would be any worse in the form of a short story. The game tells a pretty solid tale  during its first half when the player and protagonist’s ideals line up perfectly, but it begins to unravel slightly near the end when the player starts getting wise to the overall plot, at which point the hero’s goals (protect his family and home planet at all costs) conflict with the player’s (complete the game, have fun, see the rest of the story). Immortal Defense is definitely one of the better narratively linear games I’ve played, but I can’t help but feel like it overreaches in the final few acts.

But that’s all window dressing. Immortal Defense‘s gameplay is what really makes it worth the $15 asking price. Yes, I know — fifteen dollars, practically a goddamn king’s ransom where indie games are concerned (despite the fact that sixty dollars retail games Assassin’s Creed blah blah blah). For your money, though, you’ll get access to one hundred levels of progressively difficult and complex levels, culminating in one of the most epic, wonderfully protracted final battles I’ve ever seen in a strategy game.

The basic premise is as follows: each level consists of some sort of line drawing in space. Enemies start at one point on the line, and trace every countour of it until reaching the design’s endpoint, where they presumably enter your home planet and begin killing people. As the immaterial defender of your planet, your job is to set up little attack towers along the line path and take the baddies out before they can traverse the course. It’s pretty basic tower defense stuff, except the minimalist level design does a spectacular job of informing the player and focusing his or her attention on what to do. You don’t have to worry about the bad guys changing course, or moving somewhere you might not expect: they will travel across the line, and only on the line. You know exactly where they are going, and thus have more power to strategize and plan ahead than you might in, say, PixelJunk Monsters.

It’s a little too easy to get through most of the game just by placing every single tower you have right next to the enemy spawn point, but there’s still enough of a gradual difficulty increase that I never got bored, even when playing for hours at a time.

I typically hate the tower defense genre (Plants vs Zombies and Lock’s Quest notwithstanding), and was thus truly surprised to see myself power through all one hundred levels of Immortal Defense. Granted, I began to suck near the last act of the game and may have lowered the difficulty a bit (and by “a bit”, I may mean “all the way”) in order to see the rest of the story, but I still had some serious fun with Immortal Defense. Perhaps you will, too.