All random, all middle, all fun

During my competitive years, I wouldn’t settle for anything less than ranked Summoner’s Rift, 5v5 (Dota). But as I started to fill my schedule with other games and responsibilities, I needed another mode that I could dedicate a shorter amount of time to. I still wanted to play League, but I didn’t always necessarily have an hour to an hour and a half to dedicate to it at all times.

Thankfully, Dominion came around, which is essentially a twenty minute “capture the point” mode. It’s an excellent non-competitive gametype that helps players get that small piece of MOBA combat without requiring an insane time commitment, or even a higher understanding of play. But sometimes, it wasn’t enough — I wanted more lane based play, but on a smaller scale — that’s where All Random All Middle comes in. 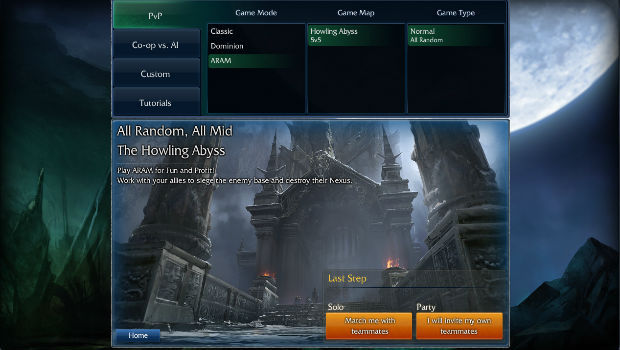 All Random All Middle (ARAM) is a staple of casual Dota play, going all the way back to the early days of the Warcraft III mod. With my group of hardcore Dota friends, it would be the one night where we could play a carefree non-competitive gametype with people who weren’t as serious about the game. To be blunt, ARAM is just how it sounds — instead of choosing your character and engaging in three lanes of play on a giant map, all players are randomly given a character, and the map is now one straight line. The concept of one lane eliminates all of the secret shops in Dota, as well as advanced tactics like ganking between lanes and lane management. Instead, all you have to do is essentially push forward and outplay your opponents strictly from a combat perspective.

The League of Legends incarnation of ARAM is called Howling Abyss. It’s been available for some time in the Public Beta Environment and in custom games, but now, it’s an official (non-ranked) queue. In this map, two turrets block the path to each base, with a dual turret last-resort protection system guarding the nexus. There’s also a shop in each base, and the only way to heal is to grab health icons along the path, which increases the pacing significantly as it’s all action all the time.

Basically, this map is all team-fighting — that is, 5v5 action on a constant basis. If you have abilities that can buff your allies, you’ll want to use them frequently, as you start to chip away your enemies and make a move on their turrets. The tide can change extremely quickly, as a two to three Champion deaths can result in a lost turret push — and subsequently, that can turn into an “Ace” (where a team kills every member of an opposing team) for the other team if that turret pushing squad goes too deep, which can end a game on an intimate map like this. 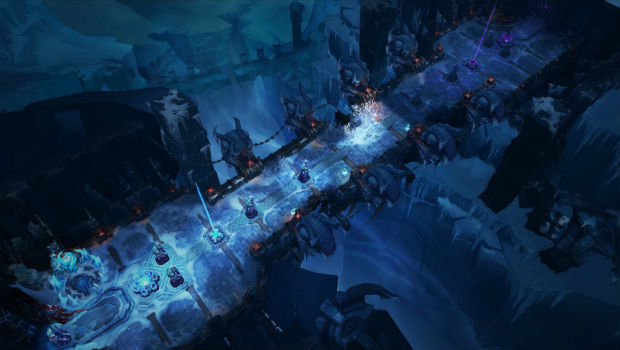 At first, you’ll have the urge to go back and heal, but you’ll need to fight that, as your home base doesn’t offer up a recovery well. Instead, you’ll have to grab health packs floating on the sides of the map sparingly, as you continue to wear down your opponents. Simply put, it makes for an exciting prospect, as you’re constantly dragged into battle on the small strip of land — ensuring that you’re always clicking or pressing something.

What I’ve found is that the Howling Abyss queue participants are a little more relaxed. Requirements go out the window when you are randomly given a character. No longer are people yelling other players to jungle when they accidentally pick a jungler and have no idea what that means. If you find yourself getting angry at queuing for Summoner’s Rift even at a low rank and getting yelled at, ARAM is for you.

Its release also coincides with Lissandra, who happens to be featured on the map itself (in the form of a carving) and is heavily tied into its lore. Certain Champions also can have unique conversations with the shopkeeper, who as a general rule is more lively than the ones on the other maps. Though the League franchise technically only has one game, the amount of effort that’s put into its lore is so great that it feels like it’s been around for much longer. Howling Abyss facilitates that, even though Riot easily could have just pushed a soulless ARAM on its fans. There’s also two exclusive items — the Guardian’s Horn and Poro-Snax, which help add some character to the map — the latter of which is a pretty funny joke item that ties into the creatures that inhabit the Howling Abyss.

Howling Abyss is basically everything I expected it to be, as a long time fan of the ARAM gametype. I’m glad Riot finally added it to the game, as I’ve been clamoring for it for years. Sometimes, you just don’t have that hour minimum time investment, but you still want to play a MOBA — well, now you can. Whether you’re a long time League fan or a prospective newcomer, make sure to try out the free ARAM gametype as soon as possible.