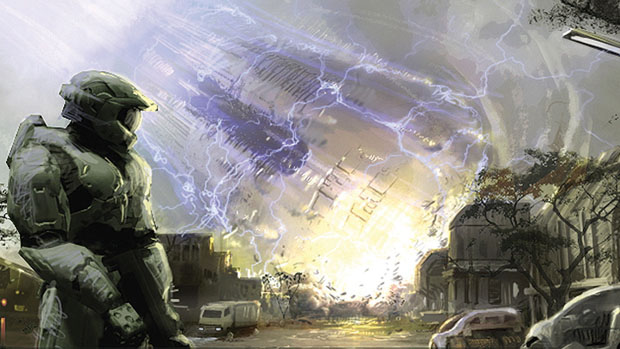 What were you doing ten years ago? Playing the first Halo game? Well this year marks the 10th anniversary of the Halo series! As one of the most successful franchises for Xbox and Xbox 360, the Halo universe has developed through six games, various comics, novel releases and an anime series.

So to mark this 10th anniversary, Titan Books have released Halo: The Art of Building Worlds.

This book brings together a beautiful collection of artwork from over thirty talented artists who have previously worked on the series, such as Isaac Hannaford, Shi Kai Wang, Frank Capezzuto and Jaime Jones. The collection combines pieces from the entire series of games including concept art, sketches, commentary, characters, weapons and sublime landscapes. 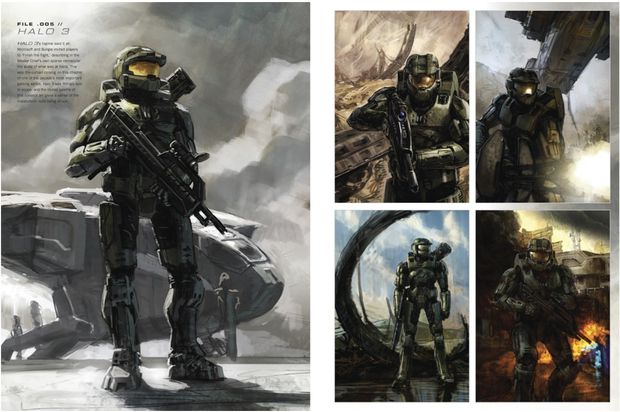 “Hey guys, I think my right side is the best side”

Taking you on a journey, it starts with where it all began — the architecture of the Forerunners and how their ancient legacy continued long after their disappearance. The combination of different art styles and development sketches for characters, weapons and vehicles within the book really demonstrate the depth of the game design process. It is interesting to see what made it into the games and what remained just an artist’s vision.

My favorite parts of the book are the literally awe-inspiring landscapes, and the sketches of the Flood with a quote from artist Robt McLees explaining his inspiration for the disgusting creatures:

“The references I found most useful when designing the Flood were old and rotten fruits and vegetables. However, an early inspiration for the carrier form was my cousin’s infected thumb, drawn from memory.”

I bet you won’t be able to face any of them now without thinking of rotten fruit-thumb images.

The book is available now from the Titan Books website, or all good bookshops and comic book stores. Check out the gallery for a mini taster of some of the 400+ images in the book.

Also, don’t forget that Halo: Combat Evolved Anniversary is out on November 15th. Check out the preview here.