But I also have my doubts

“Not another MOBA!” many of you are probably saying, but let me be the first to tell you that Gigantic is not another League of Legends clone. I loved it when I played it at PAX East 2015, and I love it now that I’ve been playing it in beta. You might love it, too.

Gigantic combines the best parts of Smite and Team Fortress 2 with a coat of paint that would feel at home in any of Disney’s animated films. The third-person perspective and shooter-like controls keep things exciting, unlike top-down games where you’re clicking to make your character lumber towards a point while you watch. Maps aren’t designed with boring lanes. They’re more like something you’d find in an arena-based shooter and because they aren’t flat, you’ll actually get use out of the jump button — unlike the one in Smite that is just for fun.

Instead of having a boring grind-fest to earn experience and gold, Gigantic has players capturing points and killing other players from the get go. This means early-game team battles aren’t unheard of, and luckily characters are balanced in a way that you have a chance to come out ahead no matter who you chose to play as. Kills and point captures power up your team’s monster mascot, causing it to attack the opposing team’s guardian to make it vulnerable to your attacks. Motiga has a guide that breaks down the power mechanic in detail, but to summarize: kill shit so you can kill a monster so you can win.

Along the way, your characters will level up based on your performance, allowing you to enhance each ability twice as well as granting you a few level-specific perks. Each ability has a tree of four different total options that vary based on what upgrade path you select. These abilities add different effects and perks onto attacks ranging from more damage to stuns to heals. In place of items, the level-specific perks give you a selection of upgrades that buff your character’s stats. This means you’re upgrading based on performance, not scoping out the opposing team’s builds to try to counter-act them. It makes for a more action-oriented game in the end rather than a game of numbers and math, which is one of my biggest gripes about League of Legends.

I’ve been playing Gigantic since it was in alpha and there haven’t been very many significant changes or additions. Currently, there are only two maps on offer and 16 characters, only one of which has been added since launch. However, balancing feels a lot more solid than when I first started playing. Matches tend to be close now when previously they felt one-sided, often with one team snowballing to victory.

I’ve switched from playing the PC version to the Xbox One version, as I prefer to use a controller to play a more precision-based game like this as I suck with mouse and keyboard when the going gets tough. The console version is nearly identical other than a shorter draw distance with a bit of fog to cover up some minor pop-in, but it isn’t noticeable unless you’re actively looking for it. The framerate even manages to hold up on the Xbox One, which is impressive considering how beautiful and hectic the game can be. 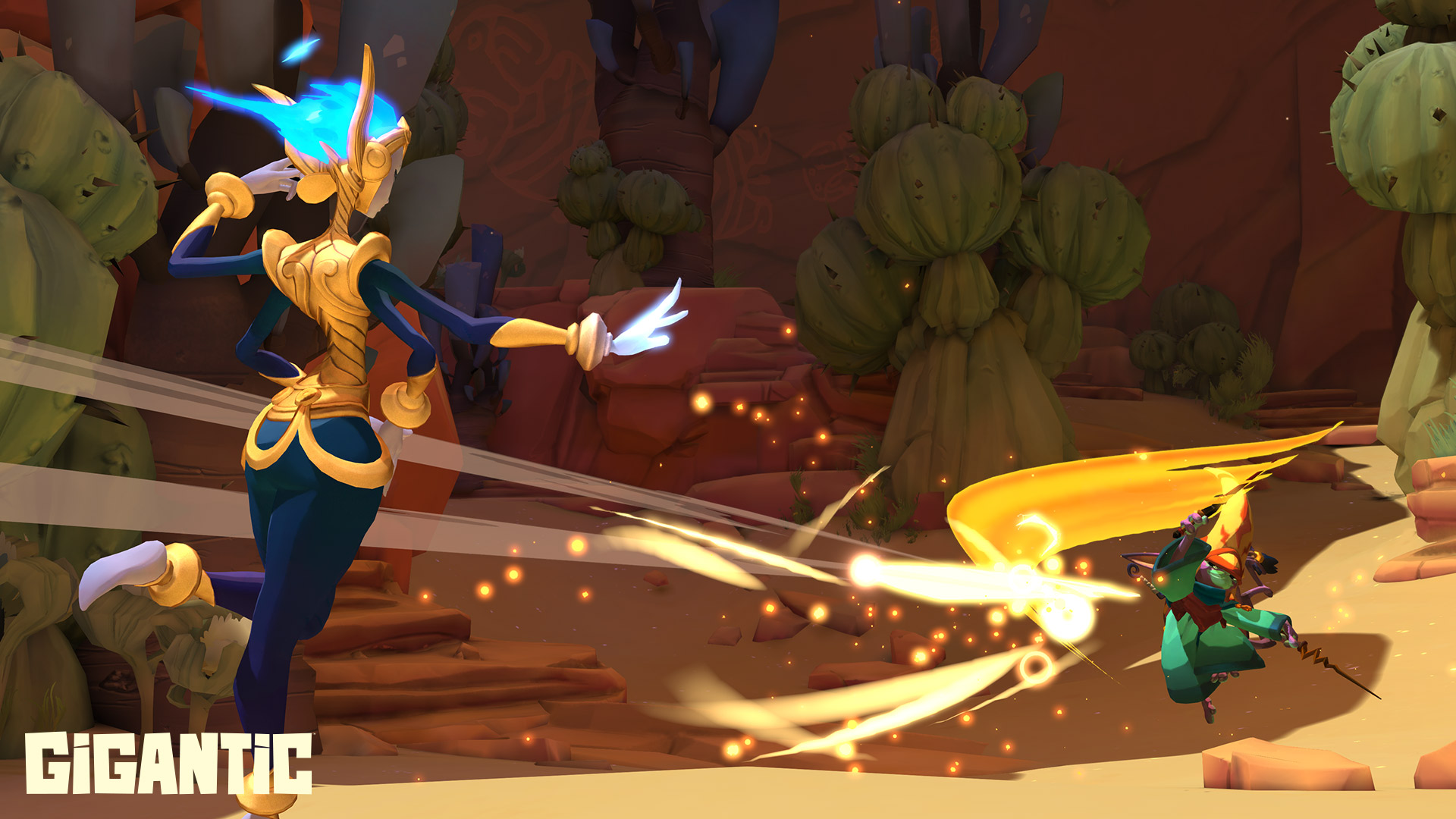 While I’m in love with Gigantic, I’m also afraid it may never see a wide release. Motiga has laid off employees two different times within the last three months, and the game isn’t even in open beta yet. Not a great sign. At this point, I feel like Gigantic is in a good-enough state to release into the wild and rake in cash to help fund continued development from the yet-to-be-introduced microtransactions. Currently, characters are on a free rotation, and can be unlocked with in-game currency with cheaper characters taking around ten or fewer matches to unlock and more expensive ones costing three times that.

If you’re interested in trying out Gigantic on Windows 10 or Xbox One, you can sign up for the beta here. Hopefully, Motiga makes the beta open to all in the near future so the game can get in more hands and I can stop waiting around three minutes just to find a match.