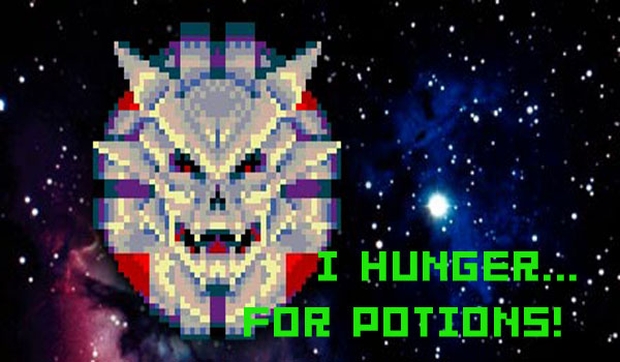 This, my first Monthly Musing that I’ve actually gotten around to finishing (it’s still August, garsh darnit!), will take the theme in a slightly different direction. In this case, I’ll be writing about a trait of mine that is technically a good strategy; a skill that should make games easier and lead to success. This seems to go against what this month’s theme is about, but let me explain. This gaming trait is one that, combined with my personality and my earlier gaming experience, ends up making some games feel more frustrating, difficult or simply less fun. So, even if I don’t necessarily “suck” at the game, I end up failing in what is the more important goal of playing a game: having fun.

So, what was that preamble referring to? As my title states, I’m an item hoarder (I was going to put in a pun in the title about being item “whore-der”, but it didn’t seem to be too funny). Most modern games have a large variety of items to collect, store and use. Ammunition, energy, medkits, potions, shields, power-ups, superweapons…the possibilities are endless. These items are supposed to be used whenever the player is in a difficult situation when the added power or protection will help him or her win the day.

The problem is that I have the dual tendencies of wanting to collect as many items as I can, but being reluctant to use them. First, I often go out my way to purchase or find one-time use items, to ensure that I have a plentiful supply for a long dungeon/boss fight. However, when I actually get to the difficult area, I end up thinking “I can’t use that powerup now for this fight, there might be an even harder one later where I’ll really need it.” One can see how this train of thought can continue for the entire game, so often I end up never finding enough need to make use of them. Of course, usually I’m able to prevail with my self-imposed handicap, but this isn’t at all what the developers intended when they put in items. … er …”well prepared.” 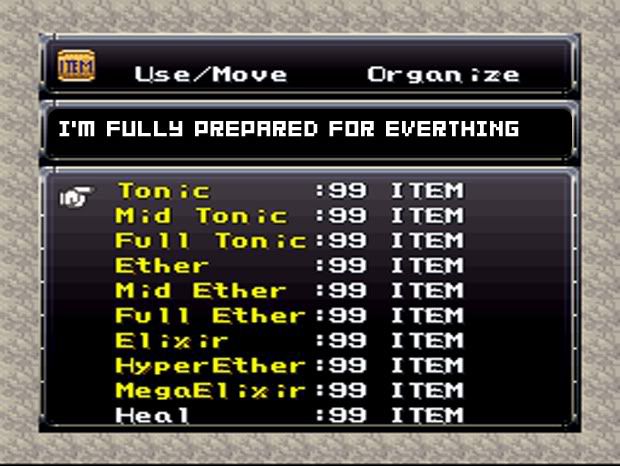 As you can figure, the genre where my “problem” causes the most grief is in RPG’s. Of course, there are the usual curative items, which I can sometimes tolerate using (although I prefer to make the longer trek to inn or other recuperative point instead). Then there are the “buffs”: items that give a temporary boost (usually a single battle) to a character’s skills, like attack, defense, magic, etc. I never use these items because their effects seem negligible enough to not be absolutely required for any battle. I get more enjoyment out of hoarding them, with satisfaction coming from knowing I have a plentiful supply ready for an emergency, even though I’ll never consider any situation to be dangerous enough to use them.

A rarer, though even more frustrating, type of item in RPG’s is the limited-use item: one that can be used more than once, but has a known or hidden limit that will eventually lead to the item breaking either permanently, or requiring repair. For me, the worst offender would be the Fire Emblem series. Most (if not all) the weapons in the game have a finite number of uses before breaking, making every single combat action seem like a torturous waste of a precious resource. Since common weapons usually last longer than rare ones, it leads me to mostly use the former, for the sake of saving those special weapons for, you guessed it, “an emergency”. Of course, I do know that most weapons can be repaired in the game, but what if my special weapon broke in the middle of a boss battle? Better to keep it at full strength, safely tucked away in storage, to await that desperate struggle that will never happen.

So, as you can see, my item hoarding doesn’t make me suck at RPG’s. It’s more like I add a layer of frustration to the games, both from my over-worrying about collecting and saving items and the increased difficulty that comes from refraining from using them when I really should be. 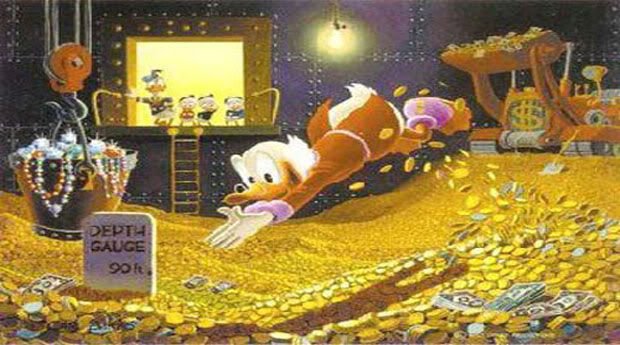 Now, how did my, er, mental problem come about? Time for a bit of self-psychoanalysis.

Right now, I’ve been cleaning out my room at my parents’ house in preparation for moving into university residence thousands of miles away. Having lived at home for over twenty years, naturally I’ve accumulated a lot of possessions. But in going through the various drawers, shelves and boxes in my room, I noticed that I’ve also collected a lot of pointless items (actually, let’s just say junk) that I only kept because I might need them, want to look at them again, or just simply never could bring myself to throw them away. For example, I had kept Grade 9 math notes when I’m about to start a Masters’ degree in History! I had trinket souvenirs, childrens’ toys. airline ticket stubs, clothes that hadn’t fit me in years, and all kinds of obsolete technology like blank VHS tapes and floppy disks. I finally was able to bite the bullet and get rid of a lot of this junk. My personal hoarding wasn’t extreme, since my room wasn’t crammed floor to ceiling with stuff, but it does show that my real-life tendency toward keeping items without using/getting rid of them drifted into video games.

However, like most addictions, there is some sort of enabler. A “gateway drug”, as some anti-drug advocates use to refer to marijuana. So, I looked back on my early childhood experience at gaming, which was in the late NES and early SNES era. For most early games, such as the original Super Mario Bros. the only items that were usually stored were extra lives, and it was totally rational to collect as many as possible but not want to have to use them. So the training already began that hoarding was a positive goal. Later, in Super Mario Bros. 3, one could actually keep an inventory of powerups like mushrooms, fire flowers and stars to be used whenever the player felt like it. Like I mentioned before, for common items I could usually bring myself to use them once in a while. However, there were other powerups that were considerably rarer. 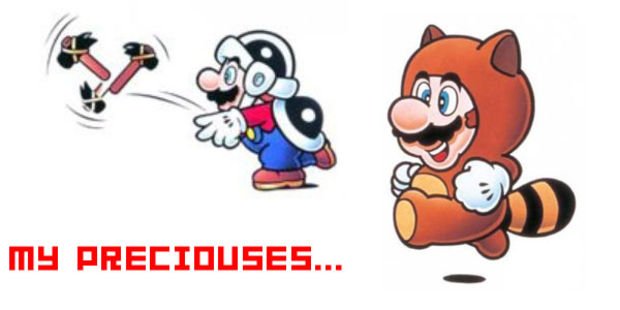 Yes, I’m talking about the Tanooki Suit and the Hammer Bros. Suit. These items come into your possession only a handful of times in the game, if you’re lucky. They’re also incredibly cool looking and powerful. So, the problem arose of when would be the best time to make use of them. If you get hit just once while using them, fall in a pit or accidentally grab a different powerup, they’re gone. Forever. You’ll never get another chance to taste the deliciousness that is Mario throwing hammers at enemies or becoming a statue that has the power to kill formerly unbeatable enemies like Thwomps. At least, that’s how it felt like to the younger me as I was playing the game. So, it led me to hold them tight against Mario’s digital chest, waiting for that nonexistent crisis. Even on the final level against Bowser, I would refuse to use them, because my hoarding logic argued that “Oh, I’ll try to beat Bowser normally for this life. Maybe if I die enough times, I’ll really need to pull out one of my trump cards.” So, it was these powerups that started me off on my terrible path of hoarding items in games. Goddamn Hammer Bros. Suit.

Looking at the past and the present, in real life and in games, I have been an item hoarder. In most cases, it hasn’t caused me tremendous difficulty, but has caused me to play games in, let us say, a more “sucky” way. I know that the items were put there by developers to be used to make the game experience easier or more enjoyable. I am also completely aware that by hoarding items I am ignoring this fact. Still, despite all that, I still feel that I get a … perverse … enjoyment out of collecting items and not using them. I don’t totally understand why I enjoy hoarding, but in the end, as long as I’m having fun, even if it wasn’t intended by games, I don’t actually suck at them. I might be a hoarder, but at least I’m … er … well prepared.