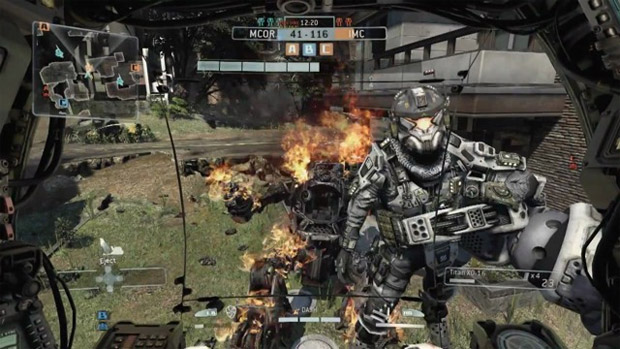 Titanfall is predicted to be the next big thing in the first-person-shooter space. A large part of that — besides the obvious inclusion of mechs that are, let’s face it, inherently freakin’ cool — is due to pacing. Both in terms of player maneuverability, being able to zip through the world, and not frequently waiting to come back into the action after being killed.

“It’s not boom-you’re-dead, boom-you’re-dead,” producer Drew McCoy tells Edge. “Because you move so fast, it’s not about who [aims quickest]; it’s about who outmaneuvers the other. I think it’s a response to the fact that we’re all getting older and our reaction times aren’t what they used to be. I want to hop into a game and not feel like every 14-year-old is going to dominate me. I want a fighting chance and I don’t want to feel I’m screwed if I didn’t get in on the first week.”

The hope is for players to survive longer — to stay engaged. That’s possible in part because Titanfall makes use of AI-controlled soldiers. “…you still have that gameplay loop of doing things, achieving things, killing people,” continues McCoy.

“They’re not meant as a human replacement. They’re a different class of people. Pilots are these super-awesome soldiers that have the gear to do double jumps, the weapons to take down Titans, but the AI are the low-level guys that are always on the ground — they’re not double-jumping and they’re really weak, but the purpose they serve design-wise is multifaceted.

“They show new players where to go. And once they start fighting, they’re usually fighting other AI because all the experienced players are fighting on walls and rooftops. New players start getting kills on AI, when usually in multiplayer games they’re getting completely whacked.”

And this is why people are so damn pumped for the game, myself included.