Earlier this week, Venture Beat landed itself in hot water with the gamer community after publishing the controversial article, “How Many Ways Can Space Marine Rip Off Gears of War?” The article accused Relic of copying Epic’s shooter series, and the writer was utterly mauled by readers.

He was mauled because, as every school boy knows, the Warhammer 40,000 aesthetic, setting, and characters predate Gears of War by a couple of decades. If anything, Epic owes a tip of the hat to Games Workshop, not the other way around. This situation is made worse by the fact that originally, the article only had ONE argument, which was basically, “The characters have muscles.”

Destructoid decided to bring some balance. We sat down with Relic, the developers of Space Marine, to get their side of the story and find out how their game is different from Gears of War. If one person thought Space Marine was a Gears clone, others will think it too — hopefully this article helps them! 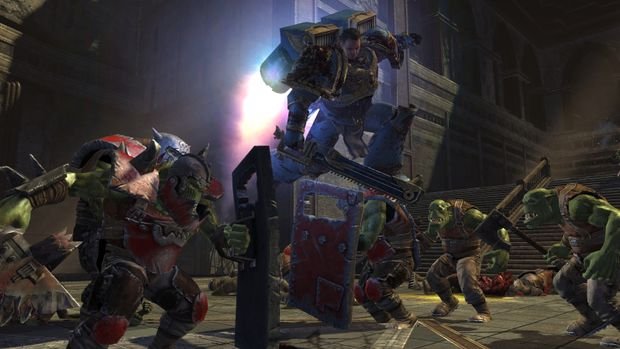 Gears of War is a cover based shooter. What that means is that you don’t run-and-gun, not if you want to survive. While there are instant-kill melee attacks, the main objective in any situation is to find something to hide behind and pop out of cover to shoot. This is exactly not what happens in Space Marine which, if anything, is a traditional third person shooter in that a cover system isn’t used.

Relic Says: “Everything in Space Marine has been built around delivering the core fantasy of being this powerful hero — the combat system emphasizes forward momentum and encourages players to throw themselves into the fray confidently, where they can be most effective.

“Space Marines are confident warriors with hundreds of years of training and fighting under their belts, powerful armour, and devastating weaponry at their disposal. They are conspicuous on the battlefield, inspiring fear in the hearts of their enemies, and hope in the hearts of the regular human fighters who pray to live long enough to witness a Space Marine in glorious battle.

“They do not take cover, they do not hide behind things to take pot-shots at their enemies. In fact, when the going gets tough and you find yourself in a situation where you’re taking a beating and other games would want you to back away and cower behind something while you recover, we give you tools to become even more aggressive – using vicious execution moves to harvest enemies for health. This way you are never out of the battle; you fight until all your enemies are dead.

“By bucking this current convention in 3rd person shooters, we are able to deliver a combat experience that is truly unique, emphasizing a strong sense of forward momentum, and confident mastery of the battlefield.” 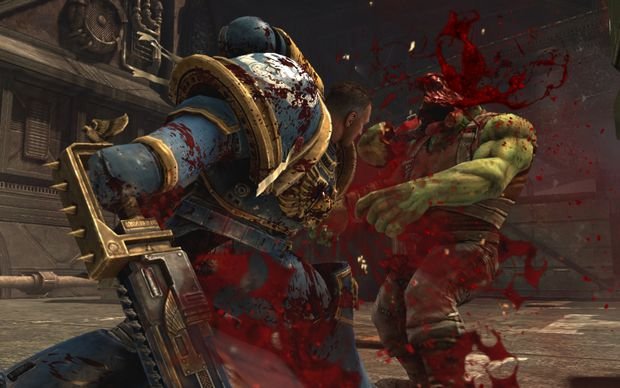 Melee Is Just As Important As Ranged Combat

Unlike Gears of War, Space Marine is just as focused on close-quarter combat as firefights. Yes, Space Marine features a Chainsword that resembles the Chainsaw Bayonet from Gears, but even that was invented by Games Workshop’s tabletop game first. By using it, Relic isn’t copying Gears of War, it’s being faithful to the source material. Man, how many ways can Gears of War rip off Warhammer 40,000, am I right?

Relic Says: “In addition to having a full 3rd-person shooter combat model that is competitive with any other shooter out there, Space Marine boasts a robust 3rd-person melee combat experience as well. It’s the seamless blending between these two systems that sits at the heart of what makes Space Marine’s combat so unique, so fluid and dynamic, and again, delivering on this sense of powerful momentum. The seamless responsiveness of having these two combat systems at your disposal is a huge part of delivering that core fantasy of being one of the most highly trained, highly capable war machines in humanity’s history.

“Combining ranged and melee so seamlessly gives the combat and encounter styling of Space Marine its own flavour as well. Combat tends to happen in short-to-medium range setups, with players having full control over how they want to fight the battle. Melee is as viable as ranged in the vast majority of encounters, and fights tend to get very up close and personal. This adds to the intensity and fast-pace of the combat experience. You are making split-second decisions about which of the many tools in your arsenal, and which combat abilities, you’re going to use to fight the layers of enemies you face at any given point.” 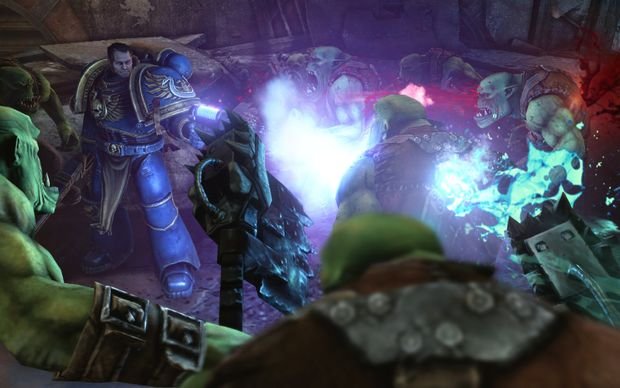 From what we’ve seen of Space Marine, the game has more in common with hack n’ slash titles and wave-based shooters than Gears of War and its small-scale, methodical, ranged warfare. Waves of Orks throw themselves at the player, and protagonist Captain Titus needs to keep moving and swinging his Chainsword in order to survive.

Relic Says: “Space Marine often surrounds you with hordes of enemies, especially when fighting Orks, our brutal animalistic mob-like enemy. We’ve built our technology so that we can throw over 30 highly-detailed enemies at you at any given time. This is core to our promise of presenting a compelling ‘one vs. many’ fantasy where you are constantly surrounding on all sides — just as humanity is constantly surrounded at all sides by the brutal alien hordes — and you dominate through skill and force of arms.” 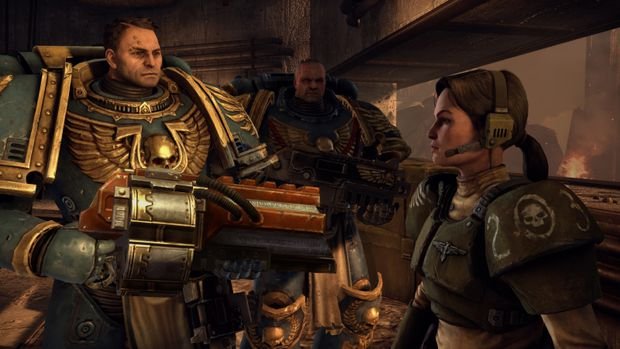 As we already pointed out, Warhammer 40,000 is several decades old. In fact, its dark n’ gritty universe is probably responsible for influencing the vast influx of bleak, war-torn shooters we’ve had this generation, with Gears of War at the forefront. It’s almost impossible to make a third-person Space Marine game that doesn’t look like Gears, because Gears of War‘s visual style takes so much from Warhammer 40,000.

Relic Says: “The origin of Space Marine as a game, was to take an IP Relic has a great love for, and express it in a completely new way. This was to be from the point of view of one of the most iconic heroes of the IP — the Space Marine. In 40k, this means something very specific — it’s not at all a generic label. Delivering the fantasy of being this hero is what has driven all our decisions around combat, the aesthetic of the world and characters, details of how the characters look, move, speak, think, etc. Just like any vast and rich IP — think of Lord of the Rings, or Star Wars — there are many ways to express the core pillars of the setting. For the past eight years we’ve focused on delivering 40k from the point of view of the battlefield commander. With Space Marine, we’re giving you 40k from the point of view of having your boots on the ground, and feeling the blood on your face.

“Space Marines are 7’ tall superhuman warriors encased in conspicuous sanctified armour and carrying ancient but extremely powerful weaponry. They are masters of sword and gun, and this is what has informed all our decisions about the visual portrayal of the character, and the way our combat system works.” 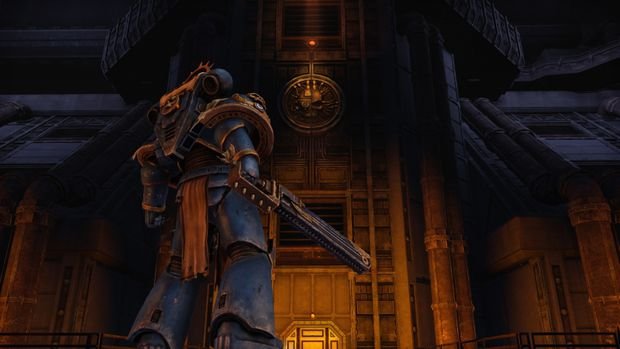 As said above, Games Workshop created a visual style that has an undeniable influence on videogames, so to the (very) untrained eye, I can see how some random game calling itself Space Marine may look like a rip-off of Gears of War. Of course, it takes only a very small amount of digging to find out just how likely it is that you accused the wrong side of forgery.

Even outside of that, though, the universe of the 41st Millennium is pretty damn different from Epic’s world of Sera.

Relic Says: “Warhammer 40,000 is a nearly 25-year old IP that comes with a very specific aesthetic styling. The architecture is vast and Gothic inspired, there is a techno-medieval aesthetic with technology and speech patterns, there is a sense of the great peril the humanity finds itself in through having billions of alien enemies on its doorstep, trying to snuff it out of existence.

“The portrayal of the world — from our vast structures to epic landscapes, destroyed cities and mysterious research facilities – is all part of the way that we are bringing the rich 40k universe to life in a way it’s never been seen — or experienced — before. This is us being inspired by 25 yrs of incredible creativity, and adding our own flavor to bring this amazing and rich universe to a whole new audience, so that they can learn to appreciate it as much as we have.” 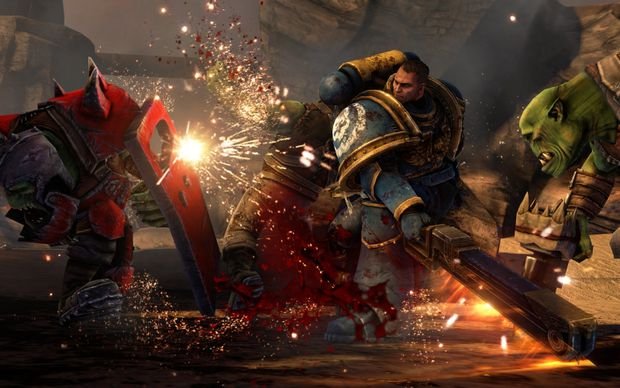 So What Have We Learned?

Venture Beat made a mistake and updated the post to address the ton of comments arguing against the original assertion. The problem of such accusatory contrasts is not unique to the otherwise on-the-ball Venture Beat, however.

Accusations of plagiarism and ripping off are pretty common among gamers, and such accusations are nearly always based on ignorance. It’s the attitude that sees every first-person-shooter get compared to Halo and every action game compared to God of War.

Sure, many games are inspired by other games. The cover system works, and thus has been incorporated into many shooters. Few action games are as brutal and heavy as God of War, so it’s natural that it influenced the development of future titles. Inspired and ripped-off are two different concepts, and if you’re going to throw the latter term around, you better treat it with respect and you need to bring more to the table than, “I just think they look a bit similar.”

Otherwise you will end up writing an update that’s longer the original article.