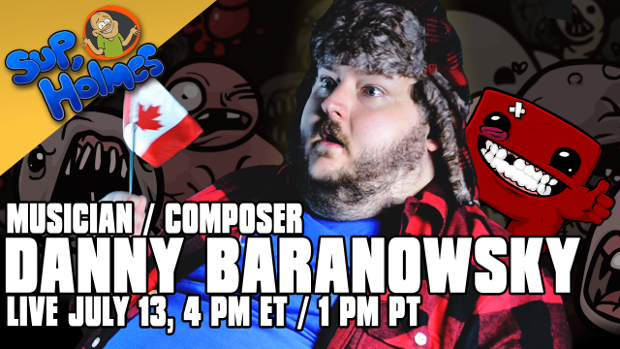 Last week on Sup Holmes, we welcomed composer DannyB (Super Meat Boy, Desktop Dungeons, Canabalt, The Binding of Isaac, Crypt of the Necrodancer) to the program. Anyone who prefers the podcasts I’ve appeared on where a man talks to me about the terrible things he wants to do to my mind and body should give this one a listen. It’s as close to Jim-era Podtoid/Dismal Jesters as Sup Holmes has gotten so far.

That’s not to say we didn’t talk about a lot of sincere stuff too. We go pretty deep into why Danny makes music, how much we both love Anthony and Ashley Burch, his acting in the upcoming FMV game Roundabout, the pros and cons of being a composer in today’s videogame industry, and a lot more. There’s also still time to enter last week’s contest to win a US copy of Mario Kart 8. Listen to or watch the full episode for more on how to enter, and thanks again to Nintendo for providing us with the giveaway.

Nintendo also provided us with $35 worth of 3DS/Wii U eShop credit to give out on today’s episode with Incredipede‘s Colin and Sarah Northway, so tune it here at 4pm for a chance to win and more importantly, a chance to get to know two really neat people!