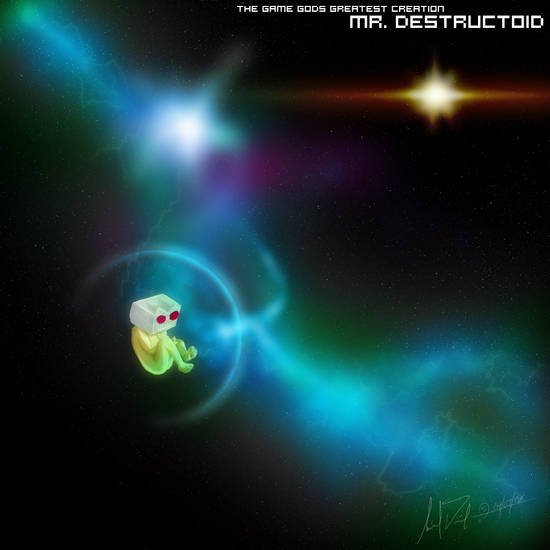 Usually, the intro is meant for the gaming setups you all have. This time, however, I figured dyslixec deserved the honor of introducing this post with his epic Destructoid art piece. Really, it just makes perfect sense. This is how Destructoid started, before time itself!

Gaming setups will be back here next week. Remember to make your blogs about them. There were some really great ones posted this past week. Otherwise, hit the jump for a recap of some of the best the Community had to offer.

Whoa, Rio left the Internet for a reason other than work?! Amazing! Rio visited Planet Comicon and looks like she had a lot of fun. She meet some people, got some swag and bought some old school games.

Happy Birthday Genki-JAM! Sorry no one came to your birthday party baby. That sucks. Lets cuddle.

A new challenger approaches and it’s Tako King! That’s right everybody! I’m in AgentMOO’s game now! Go download it and kill some bitches.

Hogeit is made of win. That amazing piece you see above was drawn by Hogeit for me and my love of the Halos. That’s just so much win.

SWE3tMadness is one sweet lady. She’s played the hell out of Super Smash Bros. Brawl and created a top ten list of the best songs in the game that could easily be played as a Concert Hall piece. She’s even taken the liberty to linking to all of the songs for your listening enjoyment.

Redzie visited the Japan Festival 2008 in Houston this past week. Anything involving the Japanese always intrigues the hell out of me.

Damn it EA. How dare you make my atheistium mad! Rock Band was finally announced for Europe but the price tag is a giant ass raping. atheistium darling, you need to just move to the states. You can live under my bed.

Coonskin, you are totally right. Seriously, wtf. Although, the Turning Point drawing didn’t really upset people. Hooray for that at least.

The 2008 Completed Game List has been updated. Go get involved and make Necros do even more work!

Podcastle has iTunes now! THAT’S IT!

Last week, I mentioned Cowzilla’s Classic Game of the Month Club. Well, looks like Conrad Zimmerman was the first one to step up and participate in the club.

Episode 44 of RetroForceGO! was released through the C-Blogs this past week. It was recorded while we all were nursing our wounds on the last day of Cancun. It’s consists of everyone that was at Cancun and turned out to be a very special episode.

Say hello to the Destructoid Radio experiment. It’s still going through some planning stages, but for now, here’s the basic idea of what we’re going for. What do you think?

AngelsDontBurn loves Ikaruga. So much so, he made an appreciation video of the game. If you know ADB, then you know that this video is going to be the tits.

Conrad Zimmerman is easily a guy you need to keep an eye out for on the C-Blogs. I can’t really relate like at all with this piece on the oooold school systems, but it’s a great read nonetheless.

GuitarAtomik needs your help again! He’s trying to win a contest and needs your help. If you downloaded his album for free, this is the least you can do!

You know that thing I said about Conrad Zimmerman? The same can be said about Excremento as well. I wish I still had all of my childhood stuff. You make me cry Excremento.

BakaTanuki likes cake. She also likes Portal. I think you can see where I’m going with this. Nice Cake baking skills you got there.

Ain’t no party like a Dtoid party. Me, .tiff and Dyson went to the Ghostbusters party in San Francisco this past week and got hammered. .tiff and I also discovered that there are real ghosts living in San Francisco. I’m still creeped out about it.

Koobert wants to know if you’re getting better or worse at games. I think I’m getting better at them. I remember NES games being hard as hell back in the day. Now, I can clear them like nothing. Games these days are too easy too.

Rio has another hat for sale and this one is based off of Parappa the Rapper. Go buy buy buy!

One party just passed, but there’s still going to be another party next Saturday! It’ll be at Dexter345’s and it’s a celebration party because Dexter finally stopped believing in imaginary people.

masterledz is back. I’ve missed the warmth of your touch ‘ledz.

Zenith loves himself some Max Payne. So much so, he’s made a big old tribute post to Max Payne. That is some serious loving there.

I got pretty last night. I made it just in time for PillowFort™ 2008! Tiff and her brilliant mind invented Pillowfort and the latest set was taken last night. This time, Rio McCarthy, pinksage, Topher, mid3vol, Husky Hog, Apple, suff0catingCat, dyslixec, Charlie, .tiff, myself and droobies made it in the montage.

Finally, I’m ending this week’s highlights with all the blogs about Cancun. First up is Knives who came out on his own just to hang out. On the last day, he got some footage of Tazartheyoot trying to order some Lobster Milkshakes. Sadly, it didn’t work out.

Chad Concelmo is a simple man. Plus, who needs to say anything when the picture speaks for itself?

Blindside Dork had a few blogs detailing the trip. From the room, to the dance off, and finally to surprise birthday cakes. Also, Dale North can dance.

Finally, here’s Charlie Suh’s photo recaps of the entire trip. There were a few blogs, but just check out his last one for a link to the Flickr with all the photos.