This week's edition of RetRose Tinted is a tie-in with cowzilla's Classic Game of the Month Club. If you aren't participating in this yet, you should really check it out. Know your roots, bitches.

When I think of games that defined the NES, a few names come to mind. Names such as Mario, Metroid and Castlevania are intrinsically linked to the system. The genesis of some of the greatest series in gaming all came out of that clunky, grey box. Meanwhile, other games that deserved the respect and admiration worthy of multiple sequels just never got off the ground.

Everybody I knew as a child who had an NES had a copy of Kid Icarus. It was an iconic example of an early game for the console but, apart from a single sequel, it pretty much just dropped off the radar. Was it good enough as a game that we should be heartbroken more weren't made or was it's fall as justified as the Greek character from whom the game's title is derived?

If you don't know who the hell Pit is, you must not have been on the internet in the last year or so. Added to the roster for Super Smash Brothers Brawl, Kid Icarus is our first introduction to the angelic warrior. The story of the game follows Pit as he rises out of the Underworld to save Angel Land, which has been conquered and corrupted by Medusa. 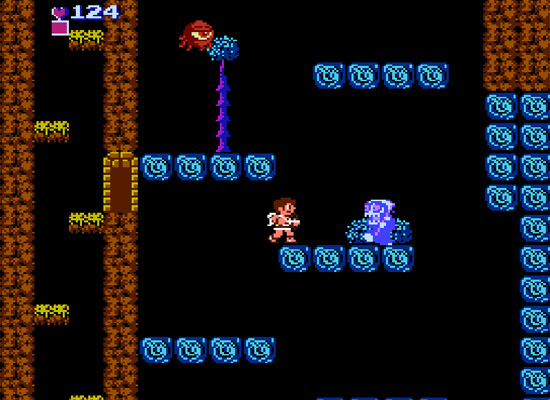 The game consists primarily of two types of levels: vertical platforming stages and maze-like dungeons. In the former, all you have to do to complete the level is reach the top door by jumping from one platform to another and avoiding the onslaught of snakes, flying eyes and other assorted enemies. Once you've cleared a couple of these, you'll enter a dungeon and must figure out the correct route to reach the area's guardian which holds one of the three sacred treasures needed to defeat Medusa.

Simple, right? Sure, if that's all you're looking at but Kid Icarus is actually a game of amazing depth for its time. As you progress through the vertically scrolling levels, you'll pass several doors. These contain shops where you can buy healing items, treasure rooms with pots that contain money, hammers and other special items (if you avoid the God of Poverty) and training rooms that offer opportunities to make quick cash or earn you a weapon upgrade. 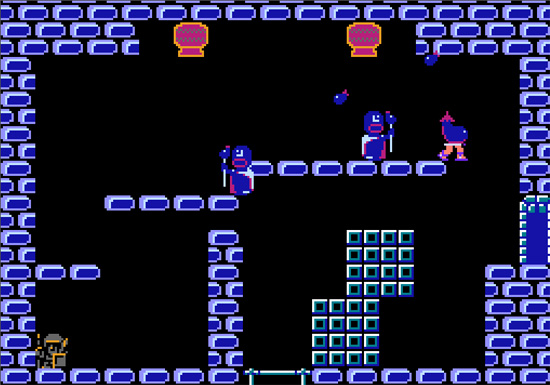 The maze levels have more to them than strictly running about willy-nilly in an attempt to find the end boss. Shops exist here as well, along with the occasional healing chamber and doctor's offices. The doctor is necessary to cure you of the Eggplant Curse, a malady brought on when attacked by an Eggplant Wizard. While cursed, Pit can do nothing but run, jump and climb, making the state hazardous when traversing the dungeon and utterly devastating should you accidentally wander into the boss room.

If you've managed to make your way to a dungeon at all (I've known people too frustrated to even reach this point), you'll no doubt have picked up some hammers along the way. Pressing the select button will equip them and they have a very useful purpose. Soldiers of the Angel Land army are located in many rooms of the maze, turned to stone by Medusa's gaze. Using a hammer, Pit can break them of this bondage and, when you reach the maze's boss, they will return the favor by fighting alongside him.

As if this wasn't enough, the game features a robust experience system based on the score you earn as you play. If you've earned enough points by the end of a level, your max health goes up. There's also a hidden skill that dictates whether or not you earn a strength increase when entering special Upgrade Chambers. For the strength upgrades, however, this hidden skill is reduced to zero on completion of a level, meaning that you'll have to have earned the points before reaching the upgrade chamber or you'll miss out.

Every enemy you kill and every item you pick up or buy gives you points. Taking damage, firing arrows and breaking open pots in the treasure chambers will reduce your score. These elements, coupled with a limited number of enemies (in the vert-scroll levels, enemies do not respawn infinitely), creates a fascinating play balance. 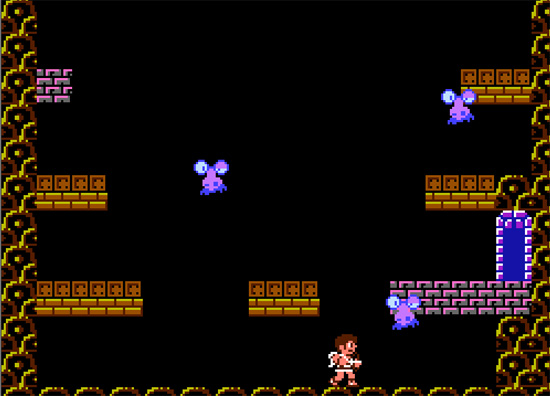 It's not all sunshine and roses, however. Kid Icarus suffers from a brutal difficulty, in part due to a few design choices. The first is the low amount of health Pit has at the start of the game. Some of the enemies move irratically, breaking movement patterns at indeterminate times and it only takes a few hits for Pit to bite it at the beginning, meaning you might play the first two levels several times before making it through. As the game progresses and you gain more health, the enemies do get harder, but at least you have more opportunity to heal and stay alive.

Another issue comes from the special weapons you gain throughout the game. They require that you have a certain amount of health for them to be active, which means that when you need them most, you probably won't have access to them. Also, they can be stolen by certain enemies. You can buy them back from some merchants but the price is exorbitant. Lastly, none of them work in the dungeon levels, further limiting the advantages to trying to earn them in the first place. 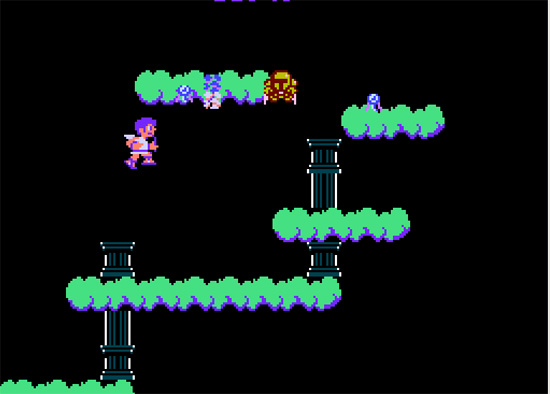 By far, the most annoying aspect that contributes to the game's difficulty is forced scrolling. On the vertical levels, the screen moves up with Pit and falling off the bottom will result in death. Feathers can be bought, which will float Pit back out of the abyss, but they're expensive and it's possible to run through them very quickly. And, as if it wasn't easy enough to just miss some of the jumps, many of the platforms allow you to pass through them when you duck. I can't count the number of times I've been done in because I tried to avoid being hit by something, only to drop through the floor and fall to my doom.

Kid Icarus: Of Myths and Monsters, 1991 by Nintendo


If Kid Icarus is a good game, the 1991 follow-up for Gameboy is a great one. Kid Icarus: Of Myths and Monsters takes everything that made the first game fun and removes most of what made it frustrating. It's still a hard game, but some changes to the formula at least make it seem fair.

The forced scrolling is completely gone in Myths and Monsters and you can come and go as you please. There are more enemies more often, making those level-ups just that little bit easier. Keys have been added as a new item, allowing Pit to re-enter chambers that he's previously visited. And Pit's wings are more than just vestigial this time. He can use them to slow his descent for making long jumps or in case he takes a tumble. 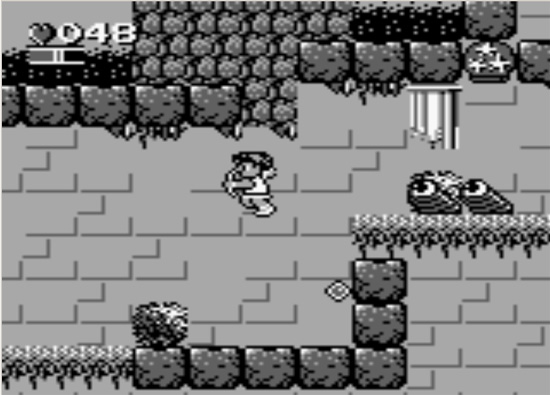 Again, it's not perfect. The reduced screen size of the Gameboy severly limits what you can see at any given time and, instead of the static, vertical-only scrolling of the original, the whole screen moves with Pit in all directions. While the latter might not seem like a problem, the levels aren't solid rooms with defined edges. Just as in the first game, Pit can pass from one side of the level to the other but the horizontal scrolling of the screen can make it a bit disorienting.

Another mild disappointment is the elimination of the Angel Land warriors from the first game. Now, the statues are in every level and breaking them usually rewards you with a small amount of health. No longer will you have an army of little flying soldiers to command. I mean, they weren't really all that helpful the first time around, but it was a cool concept and one that probably should have made the leap to portable. 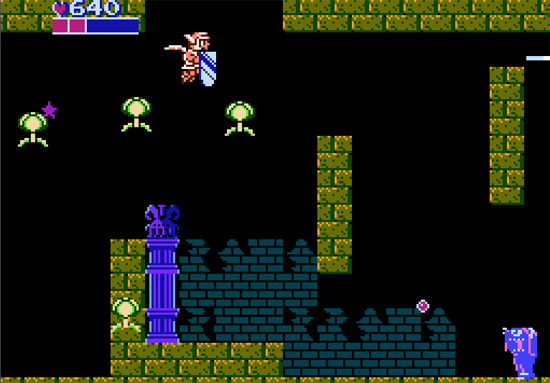 In conclusion, Kid Icarus is an excellent pairing of games that really could have carried on into present day. Perhaps it's better that it didn't, judging by what's happened to formerly excellent series such as Megaman. Still, with the reintroduction of Pit into Brawl, we may yet have a chance to see the leader of the Icarus Guard as the star of his own game once more. I'd pick up my Wiimote for that.

Final Verdict: Hella hard and outshined by its one sequel, but deserving of love nonetheless.