[Update: I went in-store to scope the situation out and see what I could get at GameStop. I waited two hours as the fourth person in line. The first two got the $77.94 Smash amiibo bundle. The third only got the Splatoon 3-pack, as did I. That took two hours to happen. Robin and Lucina sold out very quickly, which apparently delayed or canceled all of the bundle pack orders that were in the process of going through. Most of the line simply left the store in disgust.

Slow servers have been reported across the country for in-store orders, and I’ve seen pictures of knocked over displays and confirmation of at least one store ejecting an irate customer. From what I’ve heard from sources, this is such a mess that GameStop.com pre-orders won’t even go up today. We’ll provide updates as they occur, but if you really want these things, you may want to keep your eyes open on the site anyway. Based on this Facebook message it isn’t looking good.]

Today is going to be the craziest day yet for amiibo. Wave 4 is set to go live, and in addition to an up-in-the-air Jigglypuff Target exclusive, it looks like Greninja pre-orders will appear sometime tomorrow at Toys”R”Us.

Beyond that, pre-orders for Ness (GameStop exclusive), Robin, Charizard, Pac-Man, Lucina, Wario, Inkling Boy, Inkling Girl, and the Splatoon 3-pack will drop today. I spent all morning making calls and contacting sources, and here’s what I found. 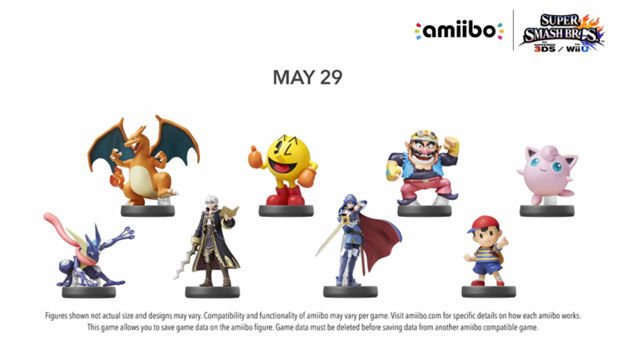 So you may have heard that GameStop will be putting everything up online at 3PM EST today. Based on a memo I’ve obtained from a source (in the gallery below), that isn’t going to happen exactly as planned. At 3PM EST, web-in-store will go live. What does that mean? Basically, you can go to a local GameStop location, give them your information, pay-up-front, and they’ll order it for you.

According to this memo online orders will not go live at exactly 3PM, and employees are instructed to direct people to stores. Sleazy as all hell, I know. Online orders will go live “sometime after that,” but an exact time isn’t given. A source has estimated “4 or 5 PM EST.” For convenience and quick ordering, a $77.94 pack will be provided that includes all of the standard figures, sans the Splatoon 3-pack, which will retail for $34.99 as a separate purchase.

As an added tip some stores have Wario listed in their systems for in-store pickup — this is the only amiibo so far in Wave 4 that has this option. It may be a common figure, but it doesn’t hurt to call your store and ask, as you might be able to lock him in before the flood gates open at 3PM EST.

You can pre-order them by way of web-in-store or online, both of which ship to your house. According to the memo there will be no “traditional” in-store pre-orders (outside of Wario), it will all be online. I don’t have confirmation on the stock and I don’t know if it will sell out in minutes, but it never hurts to be prepared.

So here are some words of wisdom for online orders. Log into GameStop.com now and check your account. Make sure you don’t need to take the time to reset your password (I had to today), your default address is correct, and if you want, store a payment method in the system. This last bit isn’t recommended but it can get you checked out faster if you want to try to grab more stock after you order your favorites.

You can not only try the default link, but the mobile site as well if anything goes out of stock. You can try it on your phone or manually bookmark https://m.gamestop.com/. It’s weird, I know, but Shulk and the New 3DS XL were showing on up on mobile with working links after they sold out on the core site.

Because Ness is exclusive, aim to get him first if you are “quick-ordering” before they sell out. You could always trade him for someone you want. Based on Japan availability, Robin and Lucina are the next rare ones in line. This also lines up with the fact that past Fire Emblem figures were already rare, and since they both work with Codename S.T.E.A.M., there will be some sort of demand for them. I haven’t heard any substantial rumors about the rarity of other figures.

As for other stores, it’s all up in the air but we’ll keep you posted. Word is that Amazon will be going live today and there’s always Best Buy, Target, and Toys”R”Us.