It’s not obvious right away

In a refreshing change of pace, Pokemon Legends: Arceus doesn’t hold your hand with every little thing like many past entries. On the flipside, a few elements have a tiny learning curve, or require a bit of gumption to figure out! Here’s how to swap party members in Pokemon Legends. When starting out, you’ll almost always commence missions in specific regions. This is how the story and the side quests play out for the most part, so you’ll quickly get acquainted with this setup.

To that end, you can do multiple things at that camp. There’s a crafting bench to create items. You can speak to the professor to level-up if you have enough research points. And you can talk to the Corps member in the camp to rest (heal, like a Pokemon Center), shop, and swap Pokemon.

Just talk to the NPC in the above picture to kick off all of the above. “I want to see my Pokemon” will bring up a UI very close to the “boxes” in old games, it’s just lo-fi and is called “pastures” now. 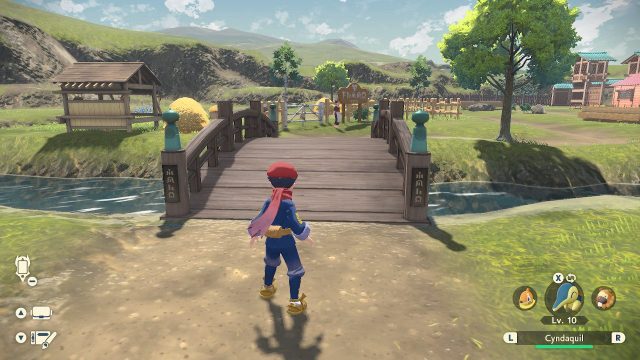 At the main hub (Jubilife Village)

In the main hub/town of Jubilife Village, you can manually engage the pasture/party swapping process (just like shopping, resting, and crafting). As soon as you get to the main gate, turn right and look over the bridge (if you’re coming from a mission into town, it’s on the left). It’s the obvious pasture-looking outdoor building. That will bring you to the same menu as the one from camp.

I figured this little rundown would be helpful, because the game actually doesn’t tutorialize how to swap party members in Pokemon Legends right away.

In any case, the selection screen will look like this! It’s just like the “boxes” in old games.