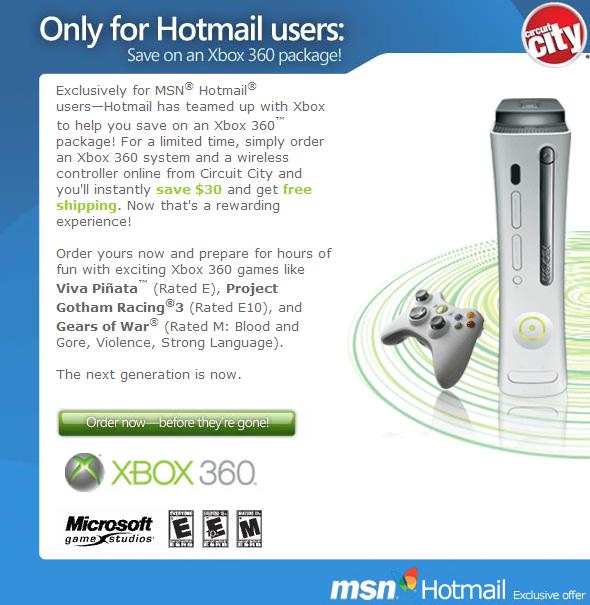 Microsoft’s latest attempt to combat Wii and PS3 sales this holiday season comes via Hotmail, that POP3 server people used to use. Somehow, I think this will be less effective than the deal they did with Amazon — $100 off > $30 off and free shipping.

C’mon Microsoft, anybody still using Hotmail is obviously loyal to you (otherwise they would’ve jumped ship to something more useful and less awkward), so why not cut them a deal, eh?

Microsoft hit the nail on the head by e-mailing this *exclusive* offer directly into people’s inboxes. Now every yuppy soccer mom will know about this, as well as 3 huge releases, complete with convenient ESRB ratings. However, the email doesn’t specify if this is the core system or not, nor does it say exactly how it works. All I know is that there’s a Circuit City logo and a green “Gimme your money” button.

The best part is the last line: “The next generation is now.” Or… a year ago.

What’s the moral of this story? Find a friend who still has Hotmail, and give him 10 bucks to let you order a 360. Make the jump for the original e-mail.

Exclusively for MSN® Hotmail® users—Hotmail has teamed up with Xbox to help you save on an Xbox 360™ package! For a limited time, simply order an Xbox 360 system and a wireless controller online from Circuit City and you’ll instantly save $30 and get free shipping. Now that’s a rewarding experience!

The next generation is now.