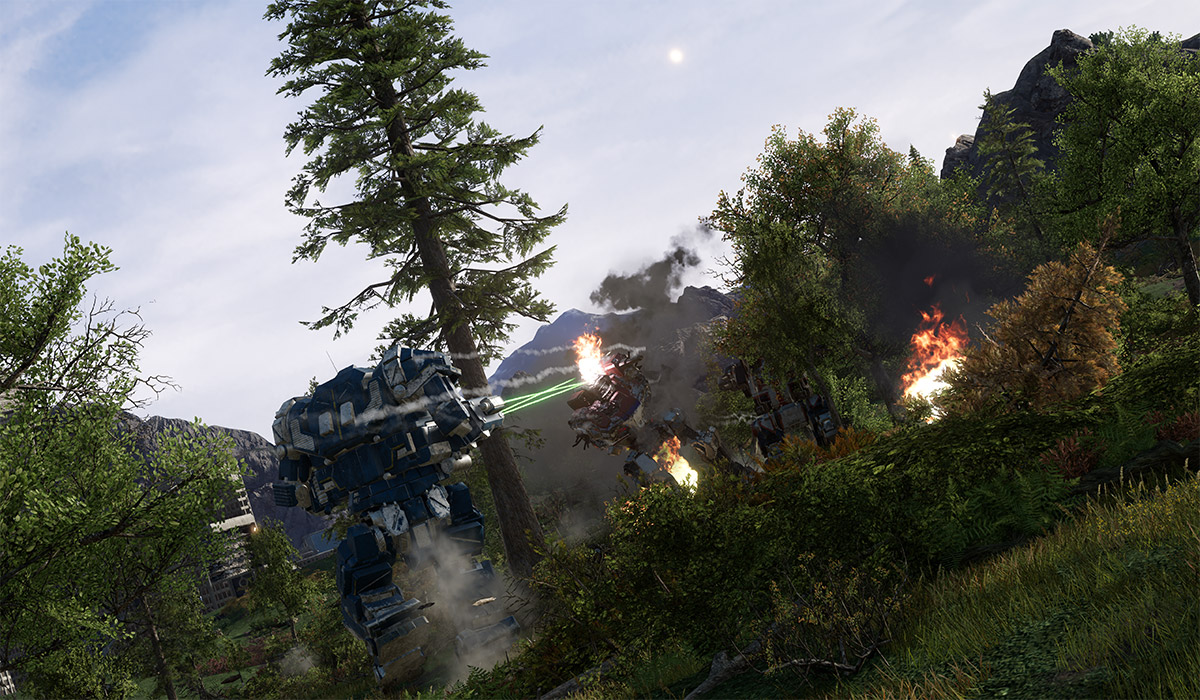 Sitting down to demo MechWarrior 5: Mercenaries, the first thing that struck me was the scale of what I was seeing. The demo I played didn’t start at the helm of a mech, it started in a garage. A hanger bay I explored on foot as a tiny, delicate human, staring up at the colossal multistory walking fortresses I’d soon be taking into battle. It was humbling, intimidating, and as someone who has played MechWarrior games for years, it was exactly where I wanted to be.

MechWarrior 5: Mercenaries will be the first single-player entry to the storied series in more than 15 years (discounting the arcade-like MechAssault of course). There is a lot riding on its shoulders. While MechWarrior Online might have breathed new life into the franchise, and the turn-based BattleTech strategy game soon to be released by Harebrained Schemes is highly anticipated by fans of the original tabletop, MechWarrior 5 is the one people are really waiting for — either as a return to the glory days, or as the final confirmation that the once-loved series is truly over.

From what I played of it this weekend, MechWarrior fans, and everyone who hasn’t had the pleasure of piloting a 100-ton wrecking machine through a war-zone, have a lot to be excited about.

Speaking with Piranha Games’ president Russ Bullock, scale is what MW5 is all about. Set in the sprawling BattleTech universe, players will lead a small rag-tag mercenary group looking to find their fortune (or at least survive) in the all encompassing war-zones of the Inner Sphere.

This is no easy feat when your company starts with a single mech to its name and hires itself out to the massive feudal governments of the Great Houses, who feel mercenary groups are as disposable as a post-Beatles Ringo solo album.

While earlier installments in the MechWarrior franchise had players pick from a specific faction or cause off the start that would send them on a narrative arc, MW5 will let players blaze their own trail. “There will be this underlying story that will be there setting the stage, hinting at a bit of your past, your legacy, and maybe some unfinished business that will come to a head, but you’re a mercenary unit,” Russ told me. “You’ll be free to go and fight anywhere and with anyone in the Inner Sphere.”

Instead of choosing a specific faction alliance when beginning the game, players will simply choose where they want to be in the solar system. Start out in space controlled by House Davion (a kind of quasi-future British empire analog) and sure, you’ll probably start taking missions from them, but you don’t have to. You could just as easily sell your services to their neighboring enemies, or work the dirty jobs found on the Periphery, lawless planets that exist on the rim of civilized space.

Where you start won’t just impact the contracts available, but also the equipment. Space is huge in the BattleTech universe, and each area of the solar system is beholden to their own markets and available supplies. What kind of mechs you can find for purchase, weapon types, and the level of technology available will all depend on where you are in the universe. “Each playthrough is going to feel unique and different from each other,” Russ says. “Between where you start and the randomly generated missions, there is no limit to the replayability. Some players might go through once or twice and enjoy it, some might never get tired of it.”

Credits rule everything around you in MW5. Everything costs money or time (which I’m told is the same thing, or at least that’s what my old manager said when he fired me for time theft from Zellers). Personnel, pilots, repairs, even traveling to another star system will cost money (that faster-than-light fuel isn’t cheap). Even something as simple as equipping a new weapon on your mech will take some budgeting. You have to buy the new weapon from the local markets (all of which supply their own specific gear at their own prices), then assign your technicians (who are all on payroll) to the job which will take them a few days. Days they won’t be able to repair your busted left leg armor or anything else. So if you have a mission coming up, you need to make a choice on what is more valuable: upgrading your firepower, or repairing the holes in your mech. Which can you even afford?

“I don’t want this to be one of those games where you worry about money during the first hour or two, and then you never think about it again,” Russ told me. “Even when you’re running an elite mercenary unit, you should still have to think about your expenses and worry about swallowing too many losses.”

These costs will balloon as your unit grows to take on more dangerous and lucrative missions that require more hands on deck. “Like previous MechWarrior games, you’ll be able to build a full lance of four mechs and assign AI pilots to the other three mechs to bring them into missions, as long as you can afford it.”

Of course, what matters most in a MechWarrior game is how it plays on the ground. At the preview event I was able to take three separate mechs out for a spin on one of the game’s early missions and put them through their stompy paces.

The mechs in MW5 feel great. They’re big, unstoppable warmachines and trompling over walls, barriers, and tanks with them is deeply satisfying. Much of the power of the mechs is sold through the destructible terrain which crumbles as you plow your way through it. While you can’t quite go full on Red Faction on a city block and reduce it to a parking lot, you can obliterate most small obstacles such as freight cars and blockades, and turn larger buildings into blown-out (but still standing) husks.

What’s better than destroying buildings though is taking apart other mechs. This is where the demo I played truly shined, offering an opportunity to wail on several different kinds of mechs and take them apart one piece at a time. Mech combat is appropriately arduous. These are not flimsy machines that are going to go down in a hit or two, they are massive walking slabs of armor that need to be disassembled one artillery shell at a time, so you can expect to trade a few blows with each mech you come across.

MW5 features some very pretty damage models as the mechs get torn up. Lasers cut unique, glowing gouges out of armor, the internal actuators of the limbs become exposed as a mech gets put through the wringer, and blown off bits reveal smoking wires and bent steel. “That damage you take in battle is going to be replicated in the hanger,” Russ explained. “You’re going to have to look at it. And if something has a repair time of two weeks, you’re going to have to watch it be repaired in that time.” If you don’t have the funds to make those repairs happen, you might just risk taking that barely functioning mech on a last-ditch mission.

Mechs aren’t the only threat on the battlefield. Tanks, helicopters, and turrets all try to make your life harder as you earn a paycheck. Of course, being in a 65-ton mech, one little old tank isn’t going to do much to you. But five of them all circling around your legs and pelting your mech with shots? That can be a problem. Positioning and situational awareness are highly prized skills in the Inner Sphere — it’s easier to avoid a problem than it is to pull yourself out of one.

Mechs might be humanoid, but they don’t dart around like a dolphin-diving soldier. They’re cumbersome machines that control more like an upright tank, with a throttle controlling the legs while aiming moves the torso and arms of the mech similar to a turret. There are two separate crosshairs on screen, one for the arm-mounted weapons, and one for the guns strapped to your mech’s torso. Knowing how to independently aim each part of your arsenal while accounting for range limitations, the lead time on a cannon shot, the arc of a missile pack, and the burn time on your lasers is all part of being a mech jock. This is also while keeping an eye on your heat gauge, and radar. The number of HUD elements on screen is appropriately intimidating for the series that popularized the mech simulation genre.

While there was only one sample mission available (an assassination job which ends in a classic BattleTech doublecross and ambush), I was able to go through several different permutations of it. Maps are randomly generated in MW5 according to their biome, offering everything from picturesque forests to barren moon surfaces.

Enemies and base locations are randomly spawned and the game automatically tunes the experience as you go, knocking the difficulty up or down depending on how you’re doing. In this early build, the environments were a bit sparse and the enemy spawning seemed a little too random for my liking (tanks and turrets popping up in areas you just cleared out moments ago). The AI for the enemies also needs a little work. I saw helicopters making some baffling aerial maneuvers and an enemy mech seemed to be asleep at the switch and passively just let me surgically dice it apart without responding. But this was an early build and Piranha Games has time to file down these rough edges.

So far, MechWarrior 5: Mercenaries shows great potential. All the pieces are there to make this the game MechWarrior fans have been looking forward to for more than 15 years and put the series back on its throne. If the team at Piranha Games can pull their ambitious vision together, they might just have something special in their hands.