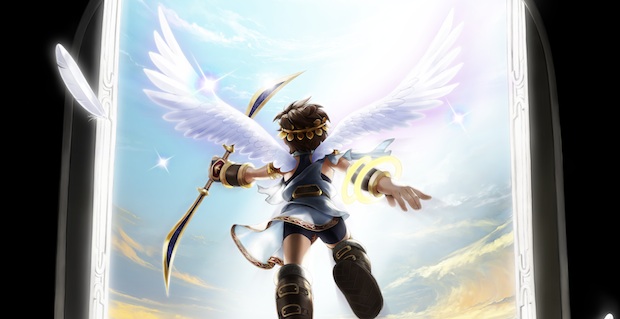 I have fond memories of my pre-teen self working diligently to master the frustrating world of Kid Icarus on the Nintendo Entertainment System, in an attempt to best the Eggplant Wizard and that thing they claimed was Medusa. Not entirely sure why the memories are so fond, because going back and playing it recently, it’s pretty obviously: Kid Icarus wasn’t very good.

But never underestimate the power of rose-tinted goggles, because as soon as Reggie Fils-Aime spit his closing remarks at Nintendo’s 3DS press conference in New York City this week, I made a beeline towards Pit’s first adventure in 20 years. 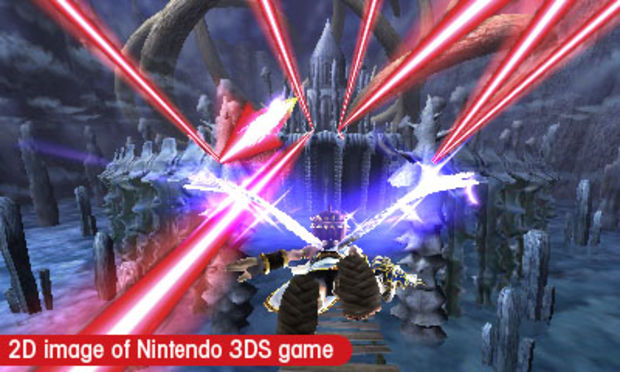 Broken up into two stages, the Uprising demo on display offered two experiences: easy and hard. Because I have no shame, allow me to disclose that I immediately dove into the game’s “easy” area, called the “Second Coming of Petaluma.”

From what I can tell, Uprising’s gameplay can be boiled down to two styles — on-rails flying and third-person, on-foot combat and minor exploration.

When Pit takes to the sky, his forward movement is entirely controlled by the game, pushing you forward as you dash through clouds or (in the instance of the more difficult stage) narrow canyons. Pit can be moved up and down or left and right by using the 3DS’ Circle-Pad, Nintendo’s lavish name for the handheld’s analog stick. The bottom screen offered little to no game information, instead acting as a de facto second analog stick. Using the 3DS stylus, you touch the bottom screen — broken up into quadrants by a white cross that divides the otherwise black screen — to move a reticle on the top screen. To fire, you press the left button on the top of the 3DS. 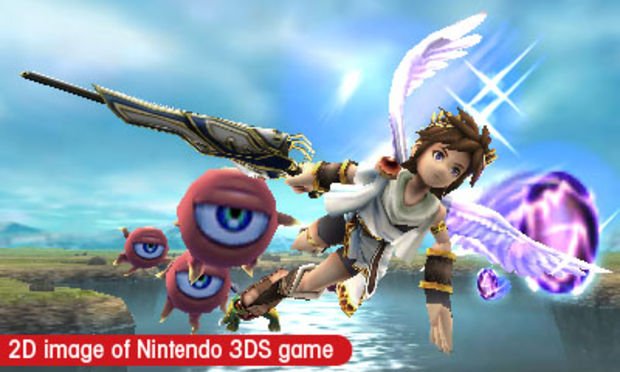 If you want to get an idea of how awkward this is, go grab your DS and give it a shot. Keep in mind that the Circle Pad sits a bit higher than the d-pad, so you’ll have to stretch your thumb a little, and you’ll be “sliding” your finger around to move Pit. If you’re anything like me, you’ll find it awkward enough that you’ll want to play with the 3DS on your lap or even sitting on a table. Certainly, this isn’t the first game on Nintendo’s touch handheld to use a similar control scheme, but I found that even after a few minutes it never quite “clicked.” It’s unclear if there will be any alternate control schemes, as the limited demo didn’t offer one — I’d love to see a Circle-Pad/face button/right trigger combo, though. Choices are nice, Nintendo.

In the case of the flight sections themselves, it’s standard shooting, Panzer Dragoon style. Throw in some Monoeyes, those red cyclops-like flying squid creatures found in the original Kid Icarus, and there you have it. It was truly simply a matter of aiming, shooting, and successfully evading enemy attacks using the Circle Pad. The demo offered no other tactics outside of being able to hold the reticle on an enemy for a moment to “charge” your attack before laying in. That said, you shouldn’t take my harping on these sections’ apparent simplicity to mean that they’re not particularly fun. Outside of the game of Twister I felt I had to play with my hands to control Pit, it was a smooth ride, one that was just difficult enough (even during the easy stage) to keep things interesting.

You’ll also be able to take Pit to the ground, moving about on his two feet with the use of the Circle Pad. The game’s reticle remains attached to the touch screen, attack still on the left button. For most purposes, the on-foot controls are identical to flight, with one small change — moving the reticle to the sides of the screens gives you control over the camera. What this means is that, instead of being on rails, Pit can move about the environment freely. It’s hard to get a sense of what this means for the game, as even these “open areas” felt guided, the game always moving you forward by offering clear challenges ahead. One portion of the demo did give me the choice to explore a corridor or continue up a massive flight of stairs. The only thing I found at the end of the passage, however, were health items and treasure — progression only came from following the stairs upwards. 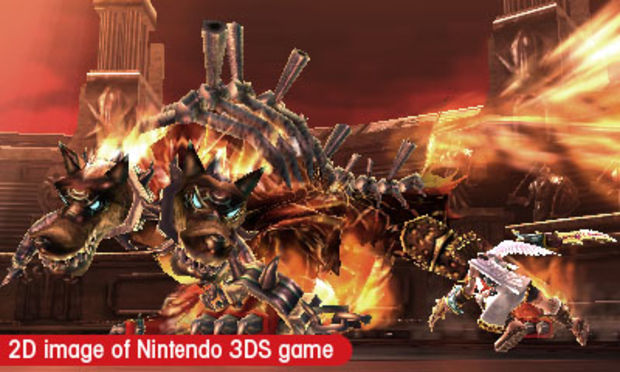 The slices of Uprising gameplay also offered a peek at two of the game’s boss battles — Turnbellows, a flaming two-headed beast who makes a return from the NES game, and the Reaper. Both bosses were massive in scale, towering over Pit, and offering decent challenge in the form or tricky but quickly recognizable old school gaming-style patterns. The Reaper’s size was especially notable, extending upwards into the sky well above Pit’s head, and swiping a massive scythe across the battle arena which he hoped would become our hero’s grave.

It also appears that Pit will have a few weapons at his disposal, as each of the demo levels offered three choices before setting out on the adventure. The Blade appears to be the “default” weapon, balanced in its power, speed, and capabilities. The Claws have limited reach, but make up for it by offering Pit a swifter movement speed. Finally, the Orbitars will allow Pit to fire two orbs at once, and are most powerful at a distance. It’s unclear if choosing certain weapons will have benefits when it comes to defeating enemy types and overcoming challenges, or if it’ll just be a matter of preference, but you’d imagine they’re offered for a reason. 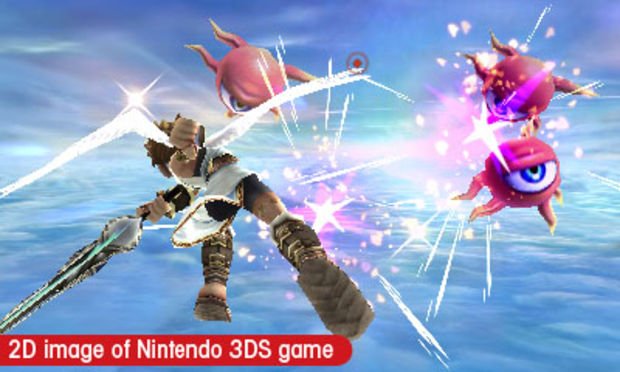 Truly, it’s hard to get a read on Uprising, considering how quickly the demo areas could be completed. It really seemed like just a small taste of a larger game, like there was quite a bit Nintendo was holding back, or at least that’s my hope. Nintendo is promising items to collect and upgrades to acquire, so there’s definitely potential for a game that’s deeper than what I saw during my first look, and that’s intriguing.

Kid Icarus: Uprising won’t make the March 27 release alongside the Nintendo 3DS; Nintendo expects it to ship later this year, but not before June’s E3 conference.