Dragon Quest Monsters: Joker 2 (DQMJ2) is the upcoming monster hunting role-playing game for the DS. The player assumes the role of a child who quite possibly aspires to follow in the footsteps of Michael Vick as he captures wild creatures and forces them to fight in death defying arena battles for money, fame and maybe even the girl. All joking aside, the game is portrayed in a much more innocent light and is well deserving of its E rating.

Just as in DQMJ, DQMJ2 functions in a similar fashion to Pokemon where players will rely on their monsters to fight turn-based battles for them in nearly every situation. Unlike Pokemon, there is quite a bit more depth to the mechanics on offer here. Players will field multiple monsters at a time with the overall number of monsters allowed in the party being dependent on the size of the monsters chosen. 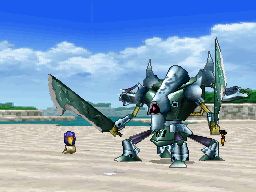 The first thing new players will notice is the host of new and improved fully 3D graphics and effects which outshine the visual experience of the original Dragon Quest Monsters Joker in nearly every way imaginable. After taking in the graphics, I got some hands-on time with the head-to-head local multiplayer tournament portion of DQMJ2.

After receiving a brief overview of its features, I felt confident in my ability to choose a competent line up of monsters. Naturally, I made a team which rivaled the 2008 Detroit Lion’s considerable ability to defy the laws of chance. I was soon competing for victory with my first, and equally under informed, foe in a similar fashion as two Tee Ball teams might “compete for victory.” After a short battle, I found myself basking in the sweet, sultry essence of victory. That was simply the rise before the fall. The final battle saw me crash and burn, earning myself about as much glory as Battlefield Earth earned money.

Wi-Fi and local multiplayer is supported by DQMJ2 in several formats and all three regional versions (US, Japan and Europe) are compatible with each other when utilizing the Wi-Fi features. Players can engage in “Tag Mode” which will exchange the monster party data of two players, allowing both individuals to fight each other’s parties without the player’s input. Owners of Dragon Quest IX may also engage in tag mode with the new game. 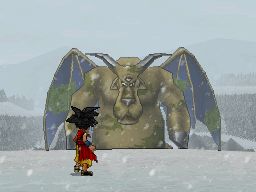 For those of you who would rather get together with some friends and flip open a couple of DSs, head-to-head and eight person tournament modes are available locally. One-on-one Wi-Fi battles is also included in the game’s already impressive suite of multiplayer functionality and players may choose to have opponents selected for them at random or they may even challenge those on their friends list.

Such small scale competition may sate the thirst for dominance of some, but for the truly competitive at heart, the Wi-Fi tournament will be your bread and butter. The Wi-Fi tournament, held every week, will see players all across the country duking it out for points as they fight for the honor of being “that guy.” Prizes for winning the tournament range from rare monsters to access to items which will help give you the upper hand in your future Dragon Quest endeavors. Just in case you require proof of your exploits, a leaderboard, hosted by Nintendo.com, will be available should the need arise to validate your gaming prowess.

Combat was sufficiently streamlined and quite intuitive to my beginner’s eye. Even though I lacked a great deal of experience with the games platform and genre, the controls felt natural and after a single round of multiplayer I would say I could demonstrate a competent grasp of the combat mechanics. DQMJ2 allows players to exercise varying levels of control over their minions during combat such as letting the computer handle the decision making for them. Control freaks may also plan out their own intricately woven assaults, forcing their foes to weather their wit as well as their brawn. Different physical attacks and spells are available for use depending on the monster you use. Provided the user is familiar with the effects of their available magic, knowing ones opponent can go a long way towards winning as certain elemental attacks will have varying consequences when used on different monsters. 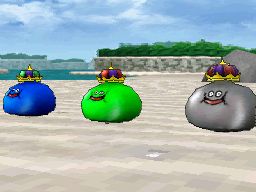 Monsters come in three sizes; small, medium and large. Having personally witnessed a medium sized monster fill most of the screen, I can only imagine the large ones are comparable to battleships with legs. The size of your monster will also determine how many monsters you can have on a battlefield. So you can either have three small monsters, one small and one medium monster or just one giant monster up against your opponent. Players will be able to easily swap to different monsters right from the item menu too.

Through a process of Synthesis, players may attempt to combine monsters with the goal of creating a new and unique creature which will hopefully dispense win while pwning in your name. This system of combining and creating monsters seems promising as the game boasts over 240 unique skill trees which can be “bred” into your new monsters. Finding the right monsters to mix and match might not be as easy as it first seems though. As in previous installments of the Dragon Quest series, a full day/night cycle will determine which monsters are roaming the wild at any given time. If one wishes to scout the perfect pair of monsters for their next synthesized creation, they just might have to explore the island in every condition possible.

The game’s single-player storyline, though nothing to get overly excited about, succeeds in providing context to the events of the game. As players advance through the single-player story, they must rescue missing people by exploring and defeating boss monsters of epic proportions. To put it simply, a child who wishes nothing more than to be a Monster Scout, has stowed away on a massive airship destined for the World Monster Championship. Under mysterious circumstances, the ship, passengers and all, becomes marooned on a feral island inhabited by the very monsters he wishes to scout. With little more than able feet and a thirst for the destiny he so desires, the child ventures forth from the relative harborage of the airship’s mangled husk in search of adventure.

Dragon Quest Monsters: Joker 2 is a fun and charming game that anyone will be able to pick up easily. Dragon Quest fans will definitely enjoy the latest DS offering and it’s just nice to see there’s still some good support left on Nintendo’s non-3D handheld.