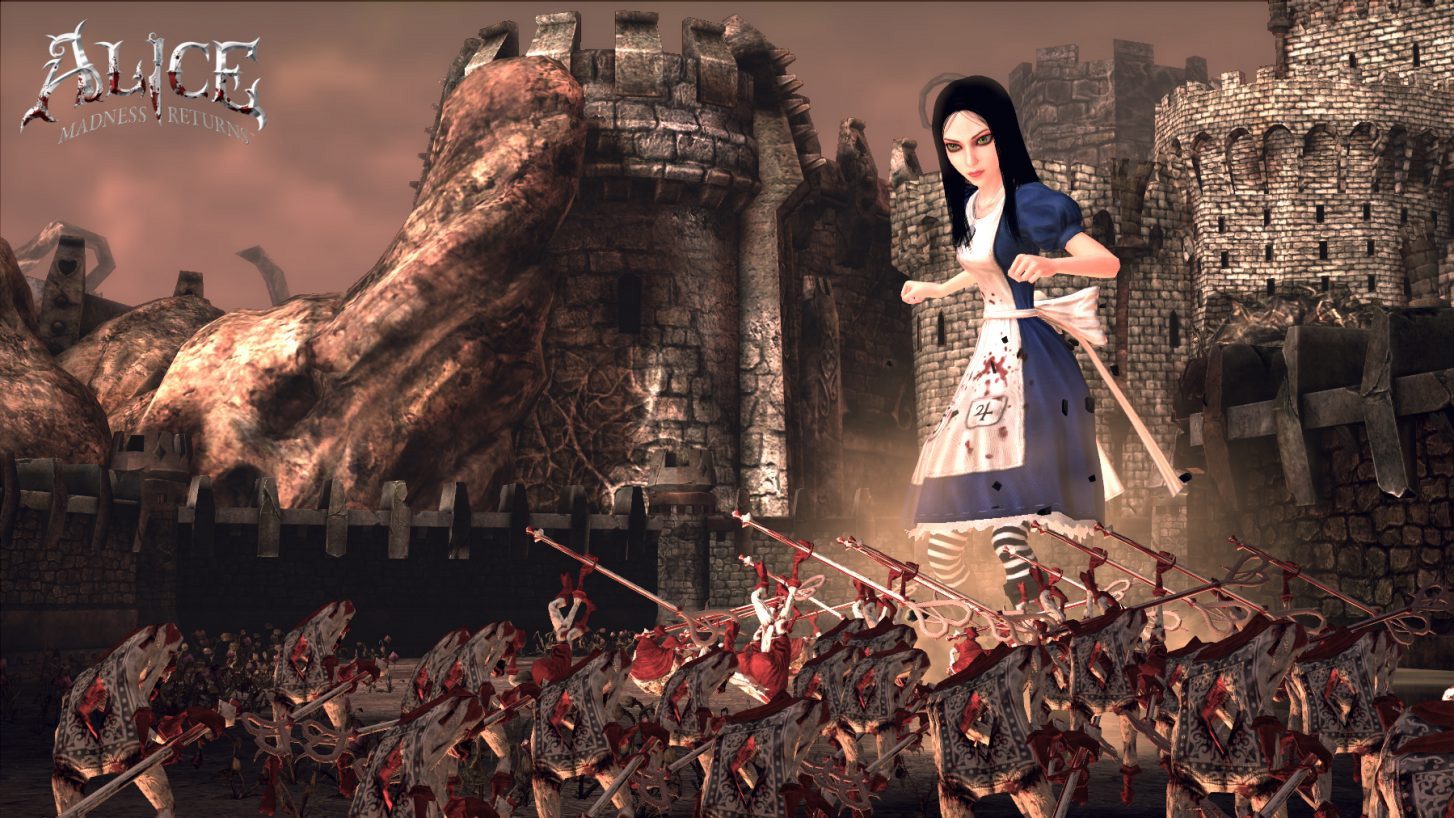 A community blog by JRusell

We’ve been curious to hear about your favorite games to play in October for Halloween, and in this blog, Destructoid reader JRusell reminds us that Alice: Madness Returns is, well, worth remembering. And cherishing! —Jordan

As the leaves go orange and the purple clouds of the north begin to replace those deep blue skies of late summer, it’s only natural to adjust our video game choices to coincide with the calendar. Halloween may inspire images of slasher gore or zombies for some (thanks Walking Dead for ruining it and making zombies fashionable 24/7/365), my seasonal gaming session follows our dear pal Alice Liddell through the looking glass. 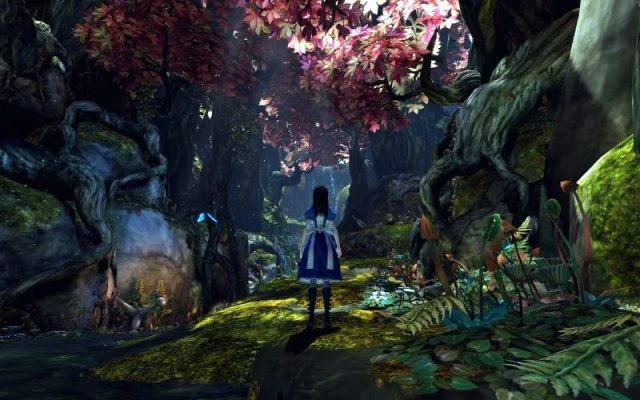 2011’s Alice: Madness Returns (PS3, 360, PC) likely didn’t shake EA’s sales projections in the way a new Battlefield or Madden entry might, but the few who experienced the game will surely be quick to recommend it for the one thing it oozes in abundance: mood.

The game serves as the standalone sequel to another game based on Alice’s Adventures in Wonderland, the 1865 English children’s novel by Lewis Carroll (a book which, no joke, finds itself in the tragic classification of literary nonsense): American McGee’s Alice. The latter being a third-person action-adventure video game (2000) developed by Rogue Entertainment under the direction of designer American McGee and published by Electronic Arts. Trouble was, it was a PC-only affair. So when, a decade later, it was time for the more fleshed-out sequel to come along, EA made sure it was ported to the consoles of the era.

The game itself — a combination platformer, collect-a-thon, hack ‘n slash, shooter (literally all of these things in equal measure) — is so ordinary in its mechanics that nearly all of its enduring appeal comes back to charm of the world itself. 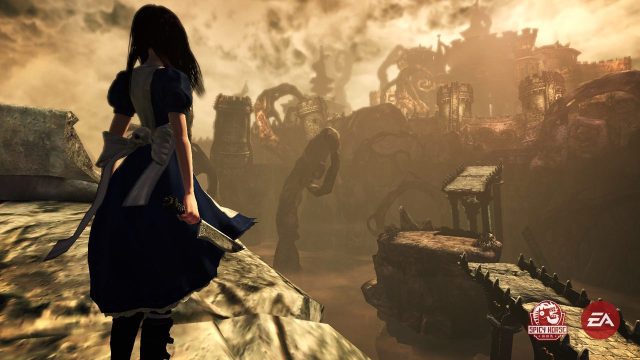 The material is bright and whimsical while somehow maintaining an eerie foundation of the purest macabre. After all, Alice is, in actuality, losing her very grip on reality on account of overwhelming guilt stemming from, what she perceives, is her fault for the death of her family in a fire.

The game is almost sublime in its integration of a colorless reality for Alice; a world of violence and prostitution, psychoanalysis and uncertainty. All of this inverses, of course, when she returns to the world of her own creation — Wonderland is truly wondrous in not only its colorful bizarrity, but also in how perfectly it lines up with the analogs of her real-world experiences.

The cat she realizes saved her life in the fire, her toy rabbit that she believes to have been stolen from her in the carnage, the well-meaning but misguided therapist who means to help her recover her sanity: It all comes back in a twisted analog in Wonderland. Even cooler still, the game makes collecting her lost memories while romping about the many missions an added goal, further linking reality with her imagination.

What’s the actual gameplay like? It’s ordinary in every one of its mechanics but comes out greater than the sum of its parts. At its core, Alice Madness: Returns is a 3D platformer from a long-forgotten (N64, PS2) era. Think sprawling (albeit linear) worlds that span entire chapters of a singular theme. Frequent cut-scenes and heavy collecting — with teeth of all things serving as the currency to purchase weapons upgrades.

The emphasis is certainly on the platforming, though, as floating (often moving) platforms over bottomless chasms are aplenty. A lot of this can be deceptively tricky, too — as the game offers you a triple jump with floating when button held ability and you’ll still spend many moments of frustrated mistiming. Fortunately, there are no lives or threats of a Game Over here. Falls are a matter of respawning and trying again until you make it. 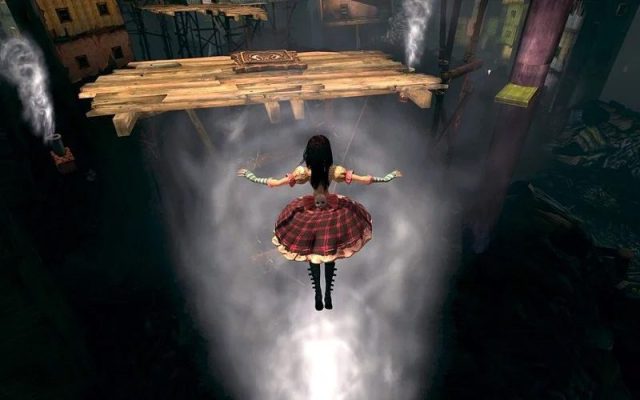 However, what separates Alice: Madness Returns from a lot of the platformers of the bygone era is its combat. As in there is a lot of it. Never mind butt-stomps or inhaling your enemies here — when it’s time to throw down, Alice means business. She has an arsenal so vast that literally every single button on the controller does something. She’s got a bloody cleaver, bombs, a mace in the shape of a hobby horse, even a pepper grinder machine gun that can do everything from blast enemies into bloody goblets to make the flying detached snout of a pig sneeze, revealing new paths.

Combat makes up the backbone of the game here and it gets incredibly intense in a hurry. Oftentimes level bosses are composed of massive melees where the player needs to dispatch a slurry of attacking enemies at the same time. Thankfully there are patterns to discover — every enemy has a weakness. Plus weapons upgrades make a noticeable difference!

The core of the game is more varied than expected, too — with overhead sliding puzzles, rhythm timing challenges, and even old-school 2D sections sometimes breaking up the 3D platforming/combating enemies grinds.

Speaking of enemies, prepare for some literal nightmare fuel. Alice tangles with a whole plethora of creatures along her path including gremlins wearing silverware armor (whose heads roll free when decapitated by Alice’s blade), leaving a blood-spurting, neck-holed body to topple over, to massive globs of black ooze wearing multiple baby doll faces. Nobody said insanity was pretty.

The good news is that taking an enemy out is strangely rewarding. The difficulty is such where nothing ever feels like it was simply handed to the player, but rather earned through patience, perseverance, and timing. And true to form, EA will sell you (for real money, of course) some upgrade packs of various dresses and cheats should you find yourself in over your proverbial crazy head.

All in all, Alice: Madness Returns is getting a bit long in tooth (no pun intended, unless EA liked that enough to upgrade my weapons for me), and to date, no sequels have ever been announced. We live in the era of HD remakes, so hopefully the powers that be will realize Alice: Madness Returns has managed to build a very loyal following. If you can snag this one (it’s almost free for PC these days), pick it up in between pumpkin carving and hanging fake cobwebs. It will become tradition. 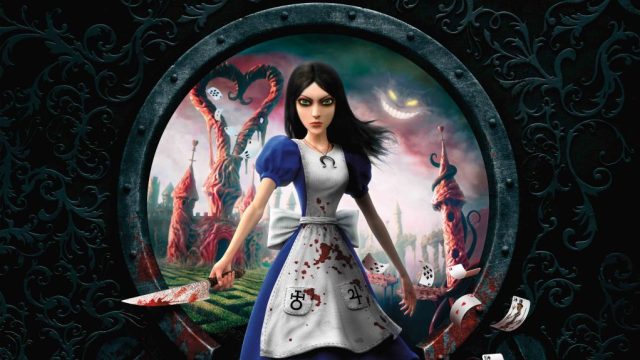