Poor Alice Liddell, mentally torturing herself after her family perished in a fire that consumed her childhood home. Enough to drive a girl mad, which is exactly what led to the events of 2000’s cult-classic, American McGee’s Alice.

McGee’s tale picked up where Lewis Caroll’s mind-bending children’s adventure Through the Looking-Glass left off. Fans and critics alike applauded McGee’s vision of a twisted Wonderland, further warped through the lens of madness.

11 years later, McGee and his studio Spicy Horse have returned to continue Lidell’s psychotic decent with Alice: Madness Returns. It’s an adventure ripe with an imaginative world and cast, solid platforming, and commendable combat. It’s unfortunate that some tedious level design and gameplay decisions keep Madness Returns from being great. 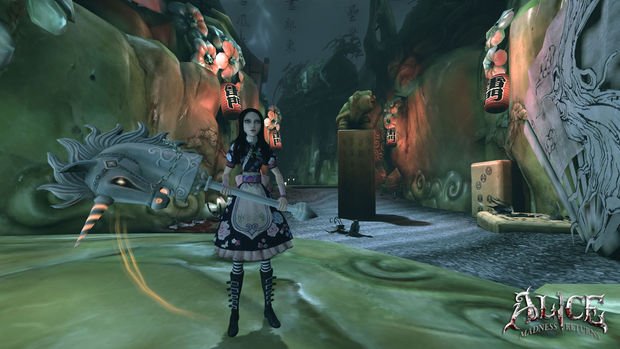 Like its predecessor, Alice: Madness Returns‘ focus is mainly on its platforming, which the game features in spades. Moving platforms, mushroom platforms you’ll bounce off of, platforms you’ll glide off of as you descend towards another platform, or riding steam vents that keep Alice afloat. The game manages to do all of this well, with a fairly solid control set that lends itself to some of the world’s tricker navigational dangers. While there area a few spots where the game’s camera will shift suddenly to an undesirable angle, instances of being unfairly punished are few and far between.

While the game’s five chapters are fairly linear, Spicy Horse does open up a little room to explore some nooks and crannies of the beautifully deranged Wonderland. Early on in the game, Alice will gulp a potion that gives her the ability to shrink on command, as well spot hidden clues and paths to proceed through the game’s world. Madness Returns features a fairly comprehensive cache of hidden collectibles, from memories that piece together Alice’s backstory to other objects that will unlock concept art and more. Compulsive collectors will have plenty to hunt for, but almost all of these items are merely there to side-track gamers from the main objective. Even Alice’s memories, which do a respectable job of fragmenting her shattered backstory, aren’t key to understanding main story threads.

Madness Returns also features updated lock-on enemy combat mechanics, which will have Alice wielding the swift and sharp Vorpal Blade as well as the more powerful, heavier Hobby Horse. What this boils down to is your common third-person action “light” and “heavy” attacks, and while there are no true “combos” to memorize, the game’s enemy patterns vary enough that you’ll need to various tactics in battle. Alice will also wield a pepper grinder that acts a gating gun for ranged attacks, a rabbit bomb, and a tea pod that fires off mortars. On paper, this stuff sounds like Third-person Action 101, and it is. But Madness Returns‘ twists on the norm — a spice burr as artillery! — manage to paint things in a curious, engrossing light.

Each of the game’s chapters paints a mesmerizing and peculiar set of wonders, playing off of themes from Carolls’ books and sprinkled with touches of goth culture. While some of the game’s horror tends to lean towards the obvious (like an obsession with eldritch doll heads and faces), the world and creature design for the most part is nothing short of spectacular. From the deranged environs of a Wonderland that is crumbling around Alice to the drab, Dickensian areas that players explore between the game’s five chapters, Madness Returns‘ artistic flair is its strongest suit.

Unfortunately, the game engine doesn’t do such a great job of being able to keep up with the art on a pure technical level. It’s hard to say what’s to blame here, whether it’s the Unreal Engine itself or the folks working with those tools, but Madness Returns sometimes struggles to bring the game’s fantastic art to life. While quick glances at the world are dazzling, closer inspection will reveal cracks in its shell. On the Xbox 360 textures sometimes look muddy and points where they’ve been stitched together are sometimes painfully obvious. Even worse, some textures load in seconds after they appear on screen, the game’s spell broken as you wait for an on-screen visual to stream into view. In an odd way, sometimes these technical hurdles lend itself to the game’s surreal, almost painted feel. Regardless, you can’t help but notice a distinct lack of visual polish in many of the game’s areas.

For those looking for a long adventure, you’ve got it with Madness Returns; you’re facing upwards of 15 hours of gameplay here through your first run. But stop and do the math on that for second: five chapters at about 15 hours of gameplay? That’s right, many of the chapters run close to three hours a piece, and in doing so, completely overstay their welcome. After an hour or so (sometimes less), you’ve seen everything the chapter has to offer. And then you’re forced to do the same few tasks over and over again, trapped in a single portion of Wonderland. 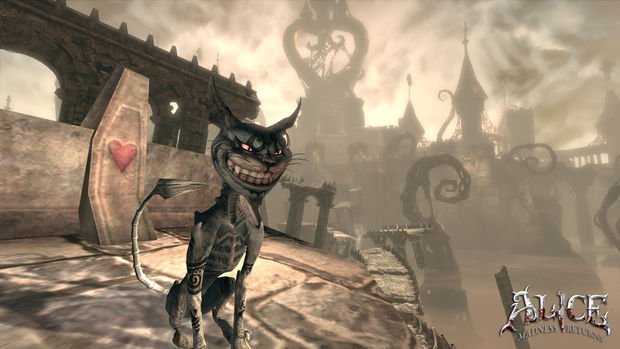 McGee has been clear about his love for Nintendo games, and the game’s combat and platforming show shades of 3D Legend of Zelda and Super Mario Bros. games, respectively. But unlike Nintendo’s classics, with a pacing that’s constantly introducing players to new mechanics and surprising tasks  throughout, Madness Returns misses the mark. Despite core gamplay of platforming and combat being solid and even fun, you quickly realize that you’re doing the same things repeatedly to the point of becoming quite tiresome. Flip a switch to move to a higher platform; kill some enemies on said platform; flip another switch; repeat. That’s Alice: Madness Returns in a nutshell, really. Spread across, say, 12 different environments, perhaps this tedium could have been masked. But after a few three hours stretches, I found myself wishing that every cut-scene would be my cue to enter a new area. And I was consistently disappointed.

Things are helped much by the fact that Madness Returns doesn’t contain any real “boss fights” outside of the game’s climactic finish. You will encounter a number of larger enemies throughout your adventure, which are boss-like in nature. But these larger enemies will be encountered repeatedly throughout the game, sometimes with smaller enemies acting to make the battles more difficult. This is particularly regrettable, considering a fresh battle would be a just reward for a three hour stretch of somewhat repetitive gameplay.

To the Spicy Horse’s credit, it does throw quite a few gameplay diversions into the fold that threaten to keep things fresh. A side-scrolling paper cutout platforming section and a shoot-em-up-style underwater scene were unexpected highlights. But even those are repeated multiple times in one level, that first instance of joy soon giving way to wondering aloud why you’re doing more of the same for the third time in a chapter. Other mini-games fall flat, like a pointless music game that’s less about rhythm/note matching and more of a series of quicktime events. There are also a few mini-games that can be skipped, and with no real reward for completing them, seemed like pointless distractions. 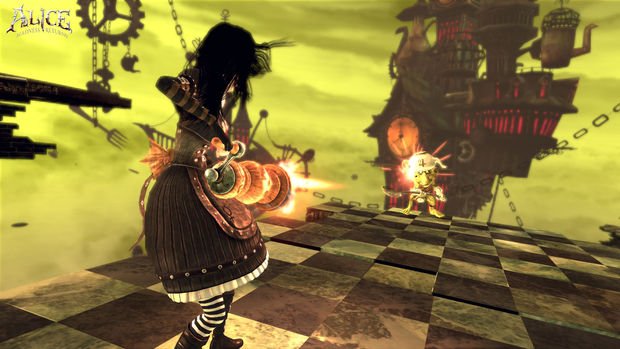 In spite of tedium and technical faults, I quite enjoyed Alice: Madness Returns, which says quite a bit for the extraordinary world McGee has created from the blueprint of Caroll’s original tales. Fans of the original Alice will find plenty of here to love, and will certainly want to return to Wonderland to work towards a satisfying narrative conclusion. For others, putting up with the game’s monotonous design may prove to be a personal spiral into madness they may want to avoid.