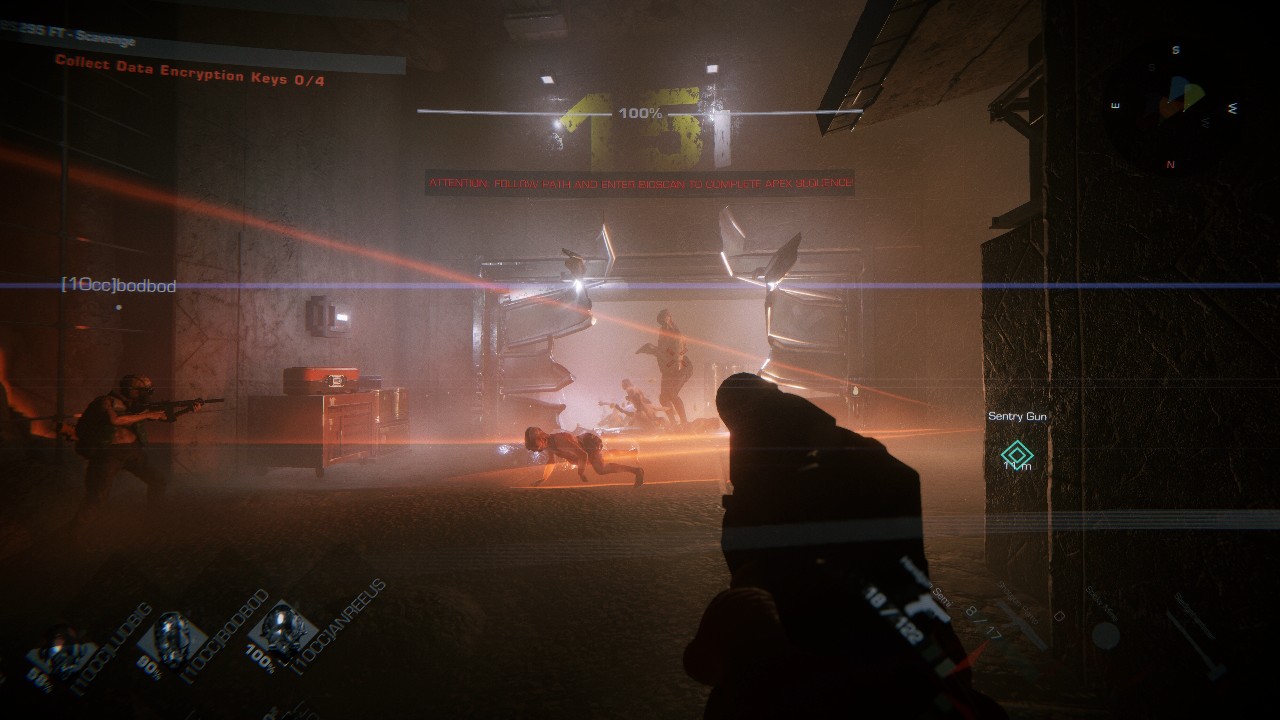 After a hands-on demo with 10 Chambers Collective’s GTFO, I’m not sure how anyone could expect to complete a level on their first try. The four-player cooperative shooter is punishing; its twisted, deformed enemies charge at you in packs, always striking at the worst possible moment. They’re capable of swarming even the best squad if one player lets their guard down for a second. And when that happens — when the chaos of combat in dark caves requires everyone’s attention — an errant bullet can spell a quick defeat. Friendly fire is just as dangerous as a mob of enemies.

To make it in GTFO, all four players must move as a single unit. Methodical preparation and firm, direct communication are just as, if not more, important than a fully-loaded gun. This is a horror shooter for the hardcore crowd.

At E3, I had the opportunity to head into one of GTFO‘s underground labyrinths alongside members of the development team. We selected loadouts — balancing your gear to complement the rest of the squad was stressed as vital — before descending into the depth of a winding cavern.

According to the developers, your loadout goes far beyond whatever guns you feel like bringing on a mission. Tools play an integral role in overcoming both the game’s challenging shootouts and navigating through the randomly-generated levels, like a mapping device that helps highlight enemies and a glue gun that’s used to either slow enemies down or bolster closed doors. Choosing the right loadout (a primary weapon, secondary firearm, melee weapon, and tool) is the first piece of a co-op experience that requires an entire team to be on the same page from minute one. 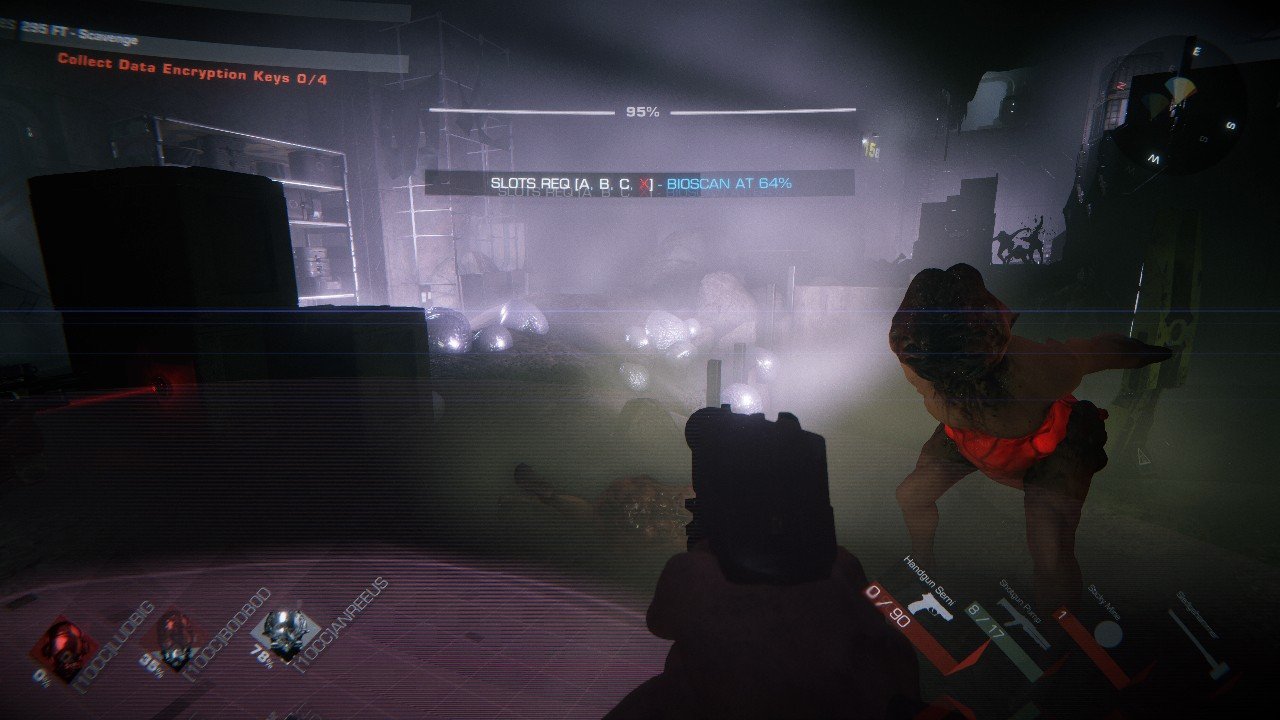 Deep underground, I’m instructed to move slowly and cautiously. The abominations that inhabit this map are sleeping and susceptible to melee strikes. Going in guns blazing risks waking every nearby enemy up, which I’m told will be very, very bad for our team.

It’s instantly clear that GTFO leans into its horror elements. Just by forcing players to stay alert, squads begin each level on edge. More foul creatures are lurking about than your squad’s collective ammo supply can eliminate. And while the standard enemies tend to sleep unless provoked, blind tendril-faced sentries patrol areas, sending their wiggling feelers forward to try and catch any unwelcome visitors unaware. Walking through one of the cavern’s narrow corridors with my team, I couldn’t help but feel as if we should hold our breath in real life, too. Its atmosphere is potent and tense. Even in a brightly-lit meeting room, I had to resist the urge to hammer on my mouse at the slightest sound.

As we attempted to get our bearings, I had a chance to see an example of GTFO‘s cooperative puzzles. The underground facility was lined with blast doors and to get through them, my team and I had to use a computer terminal to override specific locks manually. Instead of merely wandering through the level until finding a trigger to move forward, GTFO tasks one player with entering a string of inputs into the terminal while another squadmate dictates the access code required to progress. It’s an excellent way of encouraging communication in a game that so clearly wants teams to feel like a single unit. It’s also terrifying to think about operating a terminal while swarms of monsters rush your teammates. 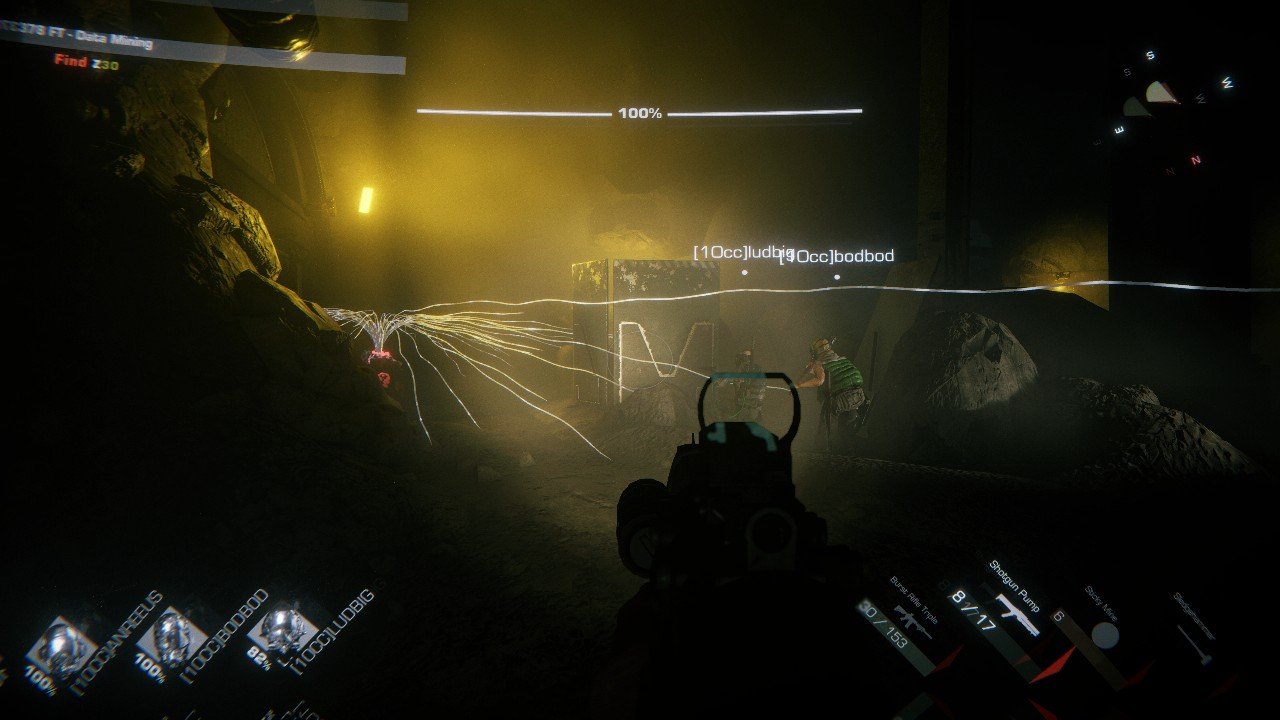 It’s necessary to stress how important communication is. Yelling out access codes for computer terminals is one thing, but calling out enemy locations in the dark is another skill entirely.

Although GTFO‘s guns look and feel great, shooting strikes me as a last resort. If your team can creep through an area undetected, it’s for the best. During the times when we had no other choice but to fight, combat became a dangerous game of positioning. Because friendly fire is a constant issue, you can’t just hammer on the trigger. We had to be delicate, despite the dire threats we faced. Even something as simple as aiding a teammate who’s getting overrun is no small task in GTFO. Trying to play the hero just means you might pump your partner full of lead.

After struggling through a series of winding rooms and surviving a few waves of enemies, my squad was defeated during a lengthy, moving firefight. We had to press from one point to another as teams of enemies — including beefier, ranged monsters — did everything they could to stop us. Each surviving member of the squad had to stand within a highlighted area before we could progress, which was no small task. Within a few minutes, we were overrun.

Despite the inherent frustration of failing a mission, GTFO is designed to encourage teams to lift themselves up and start over fresh. Maybe you didn’t communicate enemies well enough, or maybe someone made a boneheaded gear selection, or maybe your entire group wasn’t warmed up yet. Either way, GTFO‘s deviously challenging gameplay has a way of making you say “next time.” Next time you’ll coordinate better. Next time you’ll keep your flashlights off. Next time, you’ll choose better squadmates.