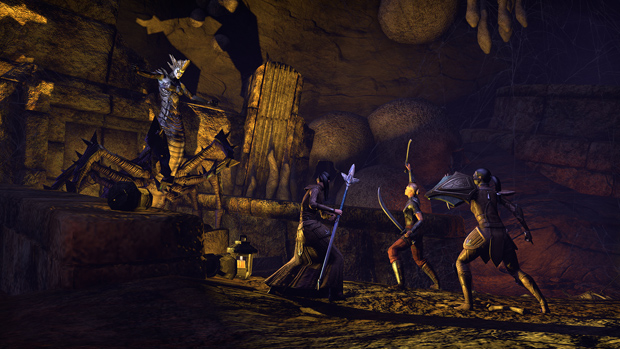 The Elder Scrolls Online did a reboot of sorts earlier this week and the game is now subtitled Tamriel Unlimited. Gamers interested in the buy-to-play, no-subscription-fee version of the game can grab any old retail copy and auto upgrade to the new version.

So if you’re looking to get in for cheap, check local stores for retail copies that might be discounted (given the digital version of the game went as cheap as $16 about three months ago).

If no discounted physical copies are around in your area, there’s a 22% off code floating around for Green Man Gaming which will work on Tamriel Unlimited. Whatever you do, don’t pay full price for a game that’s been released almost a year ago.

The expiration date on this code is unknown, but we suspect it’ll expire sometime this weekend (probably tomorrow morning). Alternatively, if the code is expired you’ll find the standard edition in Green Man Gaming’s VIP section for the same price.

The PlayStation 4 and Xbox One version of the game come later this summer on June 9.

The Imperial Edition of the game allows you to play the Imperial race and craft Imperial equipment. You’ll also get a “Rings of Mara” quest for extra experience to earn with a friend, an Imperial White horse mount to ride, and a Mudcrab vanity pet. Is it worth the extra cash? Only if you’re a fan of the Imperial race — it’s more of an aesthetic choice and not a game-breaker either way. (But if you want the Imperial race, this is the only way to go).