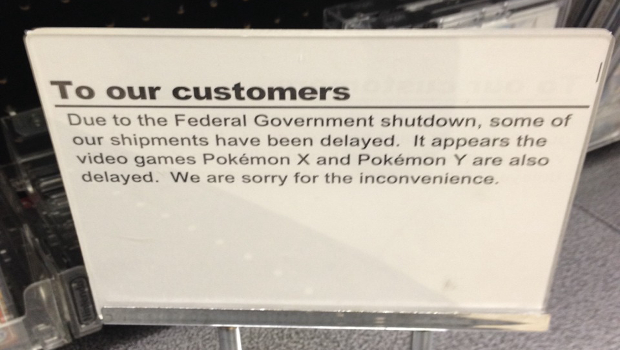 The U.S. government shut down is a national embarrassment and a hazard to the lives of millions across the country. National Parks are closed, Federal prison guards are going without pay, Government websites containing sensitive information are left unmonitored to threat, the list goes on and on.

For some, the worst of it comes today, when they go on the internet to see everyone they know talking about how much they love Pokemon X or Y while they’re left to gaze at their new incomplete Pokemon X/Y Puzzle Swap picture in sorrow while researching how much it costs to move to Canada.

For millions, the release of a new main series Pokemon game is akin to national holiday, one that only comes around every couple of years. I hope that the Government knows that for some, they’ve effectively canceled Christmas/Birthday/New Years.