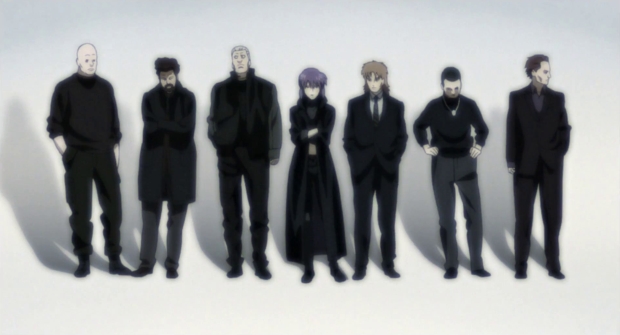 Four prequels and a First-Person Shooter

The biggest news of the event was the reveal of Ghost in the Shell: Arise, a prequel story exploring the career of series protagonist Major Motoko Kusanagi before her involvement with Public Security Section 9 (where she worked during nearly all Ghost in the Shell stories to date). Arise will be written by Tow Ubukata (Mardock Scramble) and animated by Production I.G. Its first part (of four), titled Ghost Pain, enters a limited theater run in Japan June 22nd, with a Blu-ray release on July 26th. Check out the first trailer for Arise above, and a character lineup featuring the other members of Section 9 below.

Coming in distant second was the actual videogame announcement, coming from Nexon. Dubbed a “hacking first-person shooter”, the PC game boasts customizable cyborg characters and features the “Tachikoma” spider-tanks as AI partners, and is due in 2014. However, the most notable point of the announcement was the title, Ghost in the Shell Stand Alone Complex Online, meaning it’s not actually connected to the new anime project, but to the 2002 series. What’s up with that?

Ghost in the Shell: Arise gets a trailer [Japanator]