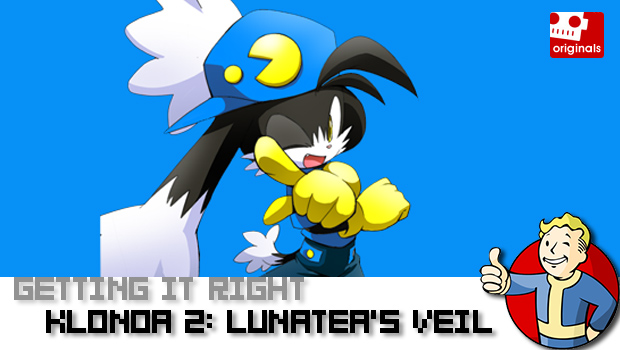 Did the 2D platformer achieve all it was capable of in the 16-bit era or did developers just run out of ideas?

Of course, we have the answer to that question now. The answer is Klonoa. It was a near-perfect platformer that merged polygonal environments within the perspective of a 2D sidescroller (“2.5D,” some endearingly called it). More importantly, it delivered on the growing demand for nuanced storytelling and variety that the PlayStation crowd demanded. In more ways than one, it made players look at the genre in a new light.

The original Klonoa is my favorite 2D platformer and each replay only makes this sentiment grow stronger. However, I’m tired of replaying it so why not turn my attention to its PlayStation 2 sequel? Another critically lauded but forgotten 2D platformer in the age of 3D shooters, Klonoa 2 gave fans of the original more of what they wanted. At the same time, it made the most of the improved hardware with some of the best art direction and design to ever grace the genre that Nintendo finds so difficult to innovate within these days. 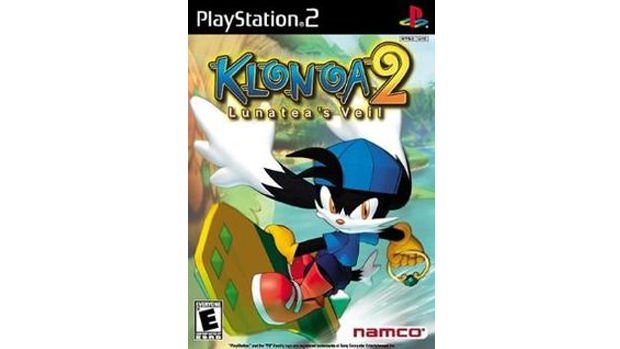 In a nutshell: Klonoa 2 is the follow-up to the 1997 cult hit that paired a colorful, dreamlike world with fluid platforming and clever puzzles. Klonoa uses his over-sized ring (the Wind Bullet) to grab enemies and toss them. After a portal shoots Klonoa into the world of Lunatea, he joins a priestess in training and her adorable pet as they try to put a stop to a bell that is spawning evil creatures into the world. Makes sense, right? 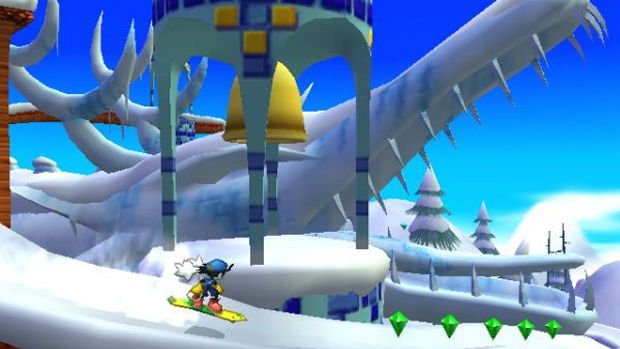 Despite playing a ten-year-old game on a standard TV, I am still mesmerized by Klonoa 2’s visuals and often catch myself smiling for no good reason. Perhaps it is for a good reason. That reason being that it’s rare to find such a detailed, imaginative, and colorful setting in games today. Shackled by HD demands and misguided by market research, the time modern developers put into creating a distinct look and world isn’t equal to the time spent tweaking lighting systems and visual filters. Our expectations are so low that just making a game on Unreal Engine 3 not look completely brown and grey is enough to earn praise.

The world of Klonoa is one of pure whimsy and delight. It’s a world made of primary colors, fantastical locales, and places we would want to visit even if we weren’t tasked with throwing baddies all day. Amusement parks have detailed roller coasters in the distance and fireworks exploding in the sky, European-esque cities are detailed with train systems and ornamental detail on war-torn homes, and natural environments (woodlands, caverns, cliff sides) are brought to life through intricate backdrops and foregrounds.

All of these thoughtfully composed levels are complemented by one of the earliest and best uses of cel shading and some stellar proto-furries character design. Each of the game’s areas are so distinct and detailed that you never know what to expect next, other than more eye-candy. 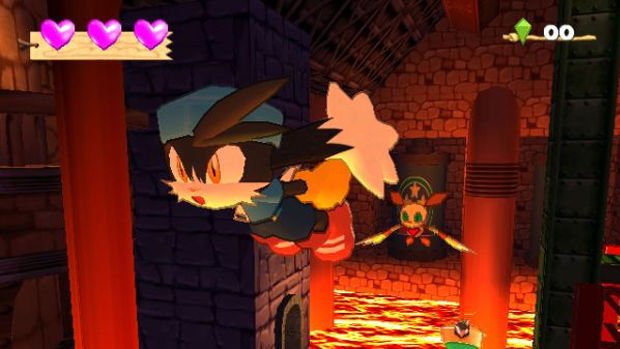 Some say 2D Mario hasn’t changed since Super Mario World, but it has and not for the better. SMW had puzzles to go along with the platforming. Sure, finding every coin and secret is a puzzle in their own way, but SMW was much more direct with its approach to puzzles. This soon fell out of favor, not only in future entries, but in the genre as a whole.

The puzzles of Klonoa are what makes the games so unique and well paced. Sometimes, you are surfing down a half-pipe, but other times, you just need to stop and use your brain for a bit. Admittedly, these puzzles won’t stump anyone who got past the first Klonoa but their inclusion is appreciated, nonetheless.

Every game could benefit from some puzzles that break up the action from time to time. This is just one of the few things that makes Half-Life so much more enjoyable than Call of Duty and Super Mario World a bit more special than New Super Mario Bros. 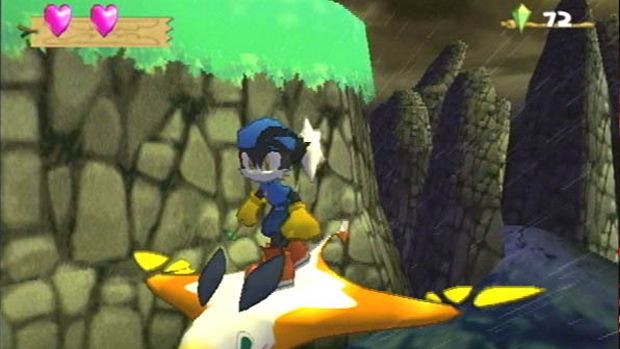 The feeling of being on an adventure

Platformers’ stories are typically only present to provide backstory and bridge the action, but Klonoa’s characters and dialog do a bit more than this. They give the game some heart.

Klonoa 2’s dialogue is badly paced and simplistic to a fault, but it helps give a sense of adventure and progress within the world of Lunatea. You won’t even mind (heavily redesigned) recycled levels because it fits within the context of the plot and even makes it exciting to revisit an earlier area to discover how it changed.

16-bit platformers gave us the sense that one day we’d be playing our Saturday morning cartoons instead of watching them — an idea that Klonoa 2 delivers on, if only for a couple hours. Escaping from a crumbling city, chasing the bad guy across the map, and heading into unknown territory with Klonoa and company is a fun trip. The game hits a sweet spot between giving scenarios more impact through storytelling without drowning the player in Kingdom Hearts-levels of insular nonsense. 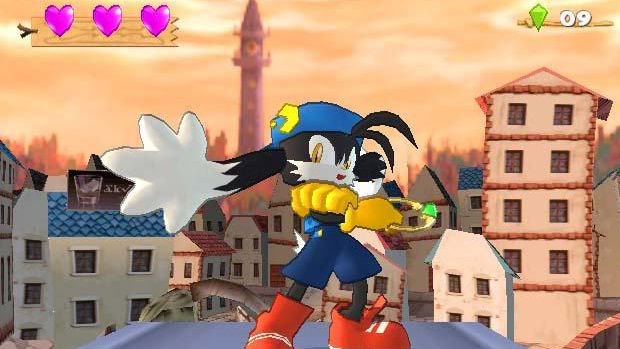 The personified hills and fluffy clouds of Mario may be surreal by design, but they have become normalized through familiarity over the years. The rules of the 2D platformer are so simple — you run and jump with rarely more than two buttons required — it opens the door to all sorts of possibilities in presentation and world-building that developers never seem to capitalize on. Most are content to follow Nintendo’s legacy and play it safe. Klonoa is the exception to the rule.

Klonoa goes to some weird places in both its visuals and story, but it grounds them all through its cast’s goals and desires. Yeah, you are fighting in the Kingdom of Joy as you try to put an end to the King of Sorrow, but it kind of just works despite how ridiculous it sounds. Everything in the game’s design builds this strange, magical world that isn’t quite like anything else.

I don’t know what the hell is going on with Klonoa’s ears or why the King of Sorrow is such a cry-baby, but it doesn’t really matter. The game never begs that you take its bizarre fiction seriously. It’s all secondary to the action but the surreal story does a great job of providing some awesome visuals, settings, and moments through it. 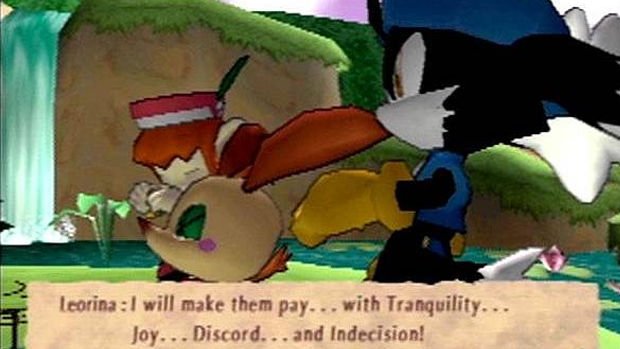 Klonoa 2 is sappy — even more so than the original — but it’s a good kind of sappy that makes the ending pull on the heartstrings in an unexpected way. The game starts in a strange, sentimental space and plunges deeper down the rabbit hole until its finale when all is revealed and the “Dream Traveler” must face his fate.

Along with the imaginative art direction, it’s the music that really pulls me into Klonoa’s melancholic world. The game often reminds me of Chrono Cross at times. Here you are on this grand adventure in a colorful place, but it all feels a bit sad for some reason. Klonoa has no real identity, everything is in disorder, and your adventure is complemented by one of the prettiest, saddest soundtracks to grace a sidescroller since Donkey Kong Country. There is a sweetness and sadness to Klonoa’s second outing that makes the game all the more memorable for it.

In a medium where anything is possible, most games seem uninspired, gloomy, and self-important. Klonoa 2 stands in strong contrast with its bubblegum world and feel-good atmosphere. It may be a bit too simple and rest heavily on the mechanics established in the first entry, but this sequel is manufactured joy for anyone seeking an off-the-beaten-path platformer with a lot of wit and heart.

Even without the HD upgrade (this game is non-emulator friendly), Klonoa 2‘s world still pops thanks to its incredible art direction. It’s a real testament that visuals and audio can immerse the player without resorting to gritty realism or familiar genre tropes. If there is one game begging for a current- (next- ?) gen sequel, it’s Klonoa. C’mon, Namco! Stop being jerks!