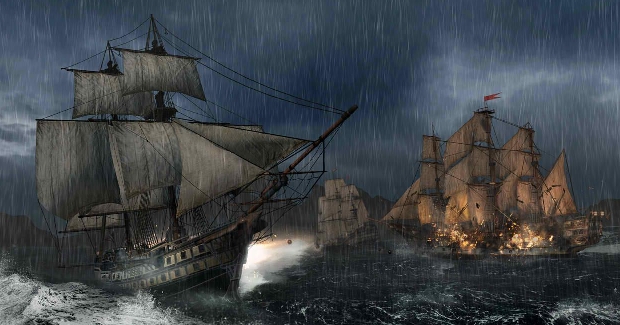 My first thoughts toward Ubisoft including naval gameplay in Assassin’s Creed III was of simple confusion. I just thought it didn’t fit the universe. After some actual hands-on time though, I find myself really digging the gameplay, but not a fan of how it’s being implemented.

My main concern is that the naval sections feel like it’s the complete opposite of what makes Assassin’s Creed so unique. There’s this strong sense of being an invisible warrior on land, and taking things to the water gives off this vibe where things feel out of place.

That said, I would love if this was a standalone mode for either competitive multiplayer or as a horde mode type scenario as I enjoyed the naval gameplay. Controlling a ship is far from being simple as you’re dealing against multiple factors all at once. You have to deal with sea currents, watching for enemy fire from all directions, factoring in the wind direction, timing your shots to lead enemy ships, and avoiding other ships from ramming into yours.

It feels so satisfying as you see your fury of cannons smash up an enemy ship to pieces. You get different types of cannons too, from ones that will start fires, to cannons chained together that slow ships down enough to get boarded.

I didn’t get to board a ship myself, but Ubisoft played a naval level in a different section of the game for us showing Connor having no choice but to ram his ship directly into an enemy’s and board it in order to kill his target. It was pretty cool watching Connor jump onboard, kill everyone in his way, setting off an explosion, and then jumping back to his own ship to sail away.

So yeah, I really dig the mode. I’m really hopping Ubisoft does something more with the naval stuff beyond diverting the player’s attention at various points in the campaign.