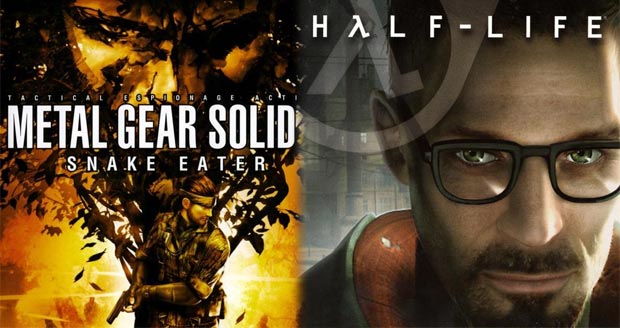 Last week‘s bonus questions brought in even more discussion than the week before, and when you outdo a Zelda and Final Fantasy debate, that’s saying something. And boy did you guys and gamer girls have plenty to say. I’m thrilled the new bonus question format is getting so much love! The Half-Life series also got plenty of love, and set a new game debate record for the most winning votes ever:

To see one of the best selling game series of all time get put in its place turned into quite the exciting comments section. For those of you who thought Half-Life was miles beyond Halo‘s reach, I hope you’re ready for what’s in store this week.

A few of you trembled in fear last week at just the thought of this debate. It may not be easy, but do your best to choose which series you like better as a whole, and tell us why! What aspects or individual games of the series made up your mind? Is your choice mainly due to support for that series, or your dislike of other series? Give it some serious thought, share your thought process with all of us, and then get some gaming friends to join in on the fun.

New Bonus Questions! Hit the jump to see not one, but all of the bonus questions. From now on I’m going to try a slightly new format to encourage more discussion! Feel free to suggest bonus questions of your own that you’d like to see used in next week’s debate topic, which is also listed below.

BQ1. What are you hoping to see in the future from the series you voted for? Feel free to get very detailed and long-winded!

BQ2. Name one thing you like better about the series you didn’t pick.

BQ3. What was your favorite game/episode in each series? Why?

BQ4. What was the moment(s) in each series that emotionally affected you the most?

BQ5. What is your favorite level or environment in each series? Why?

BQ6. Pretend you were the creator of each series. What are some things you would have done differently?

What’s your favorite Legend of Zelda game in the whole series?