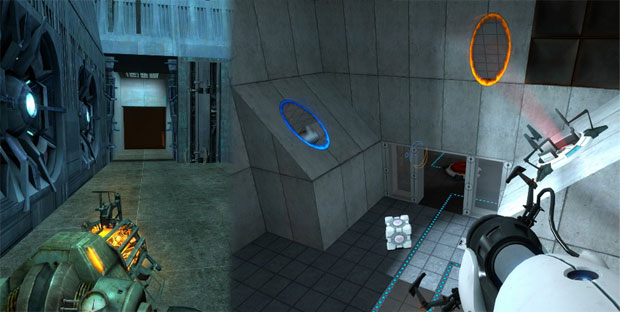 Last week was a fighting genre fight to the death. The clash of old versus new brought out all sorts of supporters and critics. The thought process of many of the comments was logical, balanced, compelling and downright a pleasure to read. Some of the numerous topics that were covered include gameplay differences, art style choices, online community support, response to professional tournaments, and the list of worthwhile discussions went on and on. Both health bars dwindled dangerously low, but in the end one game got the last hit in. Here are the final results:

This week we focus on l0cke‘s recent debate suggestion in the comments, and, judging by his Dtoid avatar, I think I know who he will be voting for! For myself, and probably most of you, it will be a much harder decision. Both choices helped define their saga of PC gaming, and both guns expanded the roles that FPS games could fulfill.

Which gun do you like better, and why? What aspect is it that made your mind up? The visuals it offered? The unique gameplay experience combined with its impact on level design? Tell us your thought process! Give it some serious thought, get some FPS friends to share their opinions as well, and check back next week for the winner.

P.S. Tonight is the annual (and Chad-MAZING!) Perseid meteor shower from midnight to 5 A.M. So get your butts outside and enjoy the show while you contemplate which weapon you will be voting for this week!