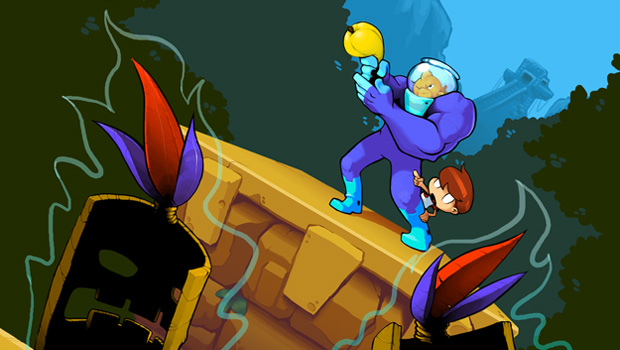 Has anyone ever played Flipper on DSiWare? It passed me by, but I should give it a look. It’s a puzzler about a boy and his goldfish. So very touching.

Flipper 2: Flush the Goldfish is pretty much a sequel in name only. This time around, you take control of the goldfish himself who is equipped with his own Earthworm Jim-style power suit. You run through levels, shooting your banana gun at creatures of all makes and sizes, all by — here is the crazy part — using a single button. That’s right! A one-button puzzle platformer starring a superhero goldfish, plus a level editor tossed in for good measure!

In addition, Flush the Goldfish was made predominantly by single dude, Hugo Smits, with a bit of help from Paul Veer and Roy Nathan de Groot, both responsible for the art in Super Crate Box. I don’t know about you, but that’s pretty amazing. I always appreciate such passion projects, but its a bonus when those projects look pretty kickass.

Flush the Goldfish is a DSiWare title, but whatev. It can still be played on a 3DS. It’s already out in Europe, but it’ll arrive everywhere else by the end of this month for 500 points.